Second-longest economic boom in US history ends in 2020

Economists: Second-longest economic boom in US history ends in 2020 … with a recession.

by BRANDON A. WEBER NEW YORK - SEPTEMBER 17: Traders work on the floor of the New York Stock Exchange September 17, 2008 in New York City. The Dow Jones Industrial Average closed down 449 points today despite American International Group, Inc. (AIG) $85 billion government ba
60 private-sector economists were recently surveyed by the Wall Street Journal, and their prediction is somewhat dire. 59% of them say the economic expansion that began in 2009 after the Great Recession of 2008took the wind out of the world’s economic sails will end in 2020. Another 22% pegged the year 2021. What lies beyond that is probably another recession, the depths of which will likely become apparent as things progress — or, rather, regress.
“The current economic expansion is getting long in the tooth by historical standards, and more late-cycle signs are emerging,” said Scott Anderson, chief economist at Bank of the West, who was among those economists predicting a 2020 recession. 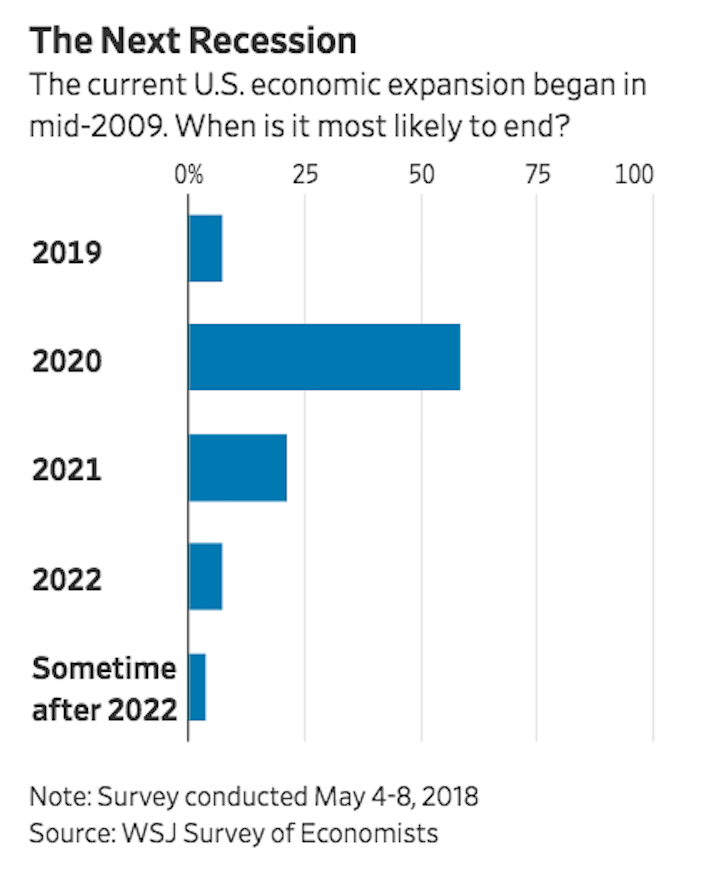 Source and credit.
62% of the survey respondents indicated an overheating economy tied with the tightening of the Federal Reserve interest rates as reasons things will get worse.
It’s worth noting that these kinds of things are very hard to predict, so a grain of salt is warranted. However, with a total of 81% of economists surveyed by the WSJ predicting that things will hit the fan by 2021, it seems likely that it’s coming.
The current “boom” is second only to the 1990 information technology economic bubble that lasted nearly 10 years and coincided almost exactly with the years Bill Clinton was President. Interestingly, the same survey revealed that those same economists do not think the "tax breaks passed by Congress have anything to do with the current economic expansion.
That same expansion has left many people underemployed and earning less than before the Great Recession of 2008, as well as losing health insuranceand retirement savings, which could mean when the next bust happens, poor and working-class people will be in much worse shape than ever. And that, coupled with the elimination of some social safety nets across many states in the U. S., means the future might be pretty bleak, indeed.
At least, for those without a pile of money to rely on.
Sponsored Content
Posted by Cabecilha at 9:44:00 AM No comments: