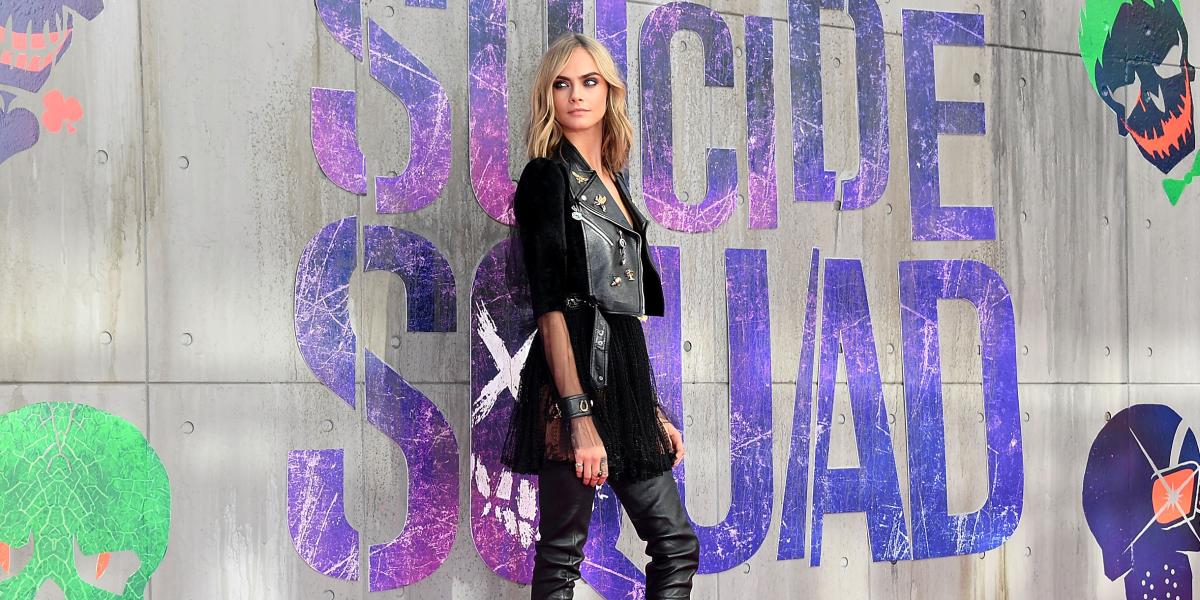 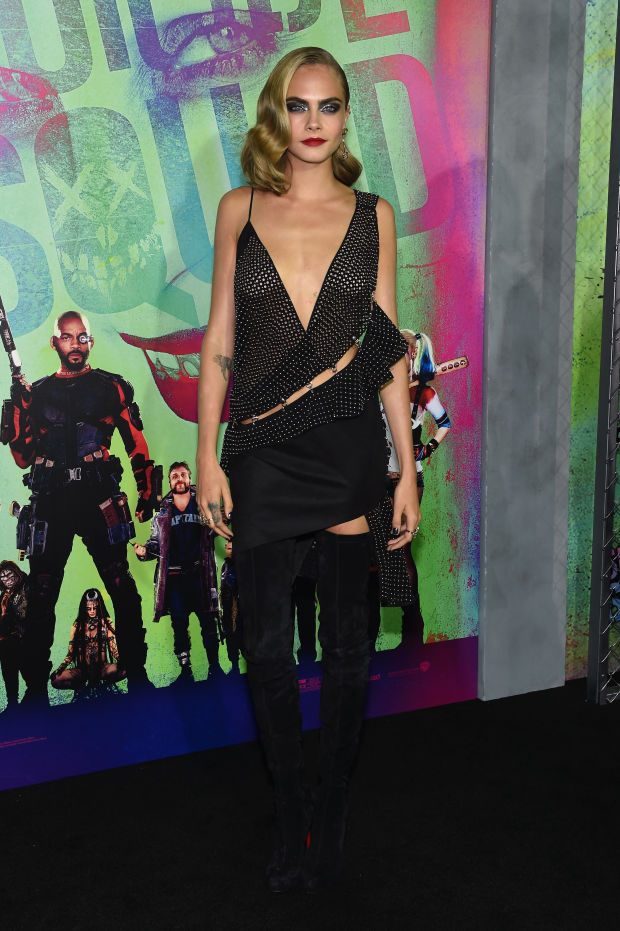 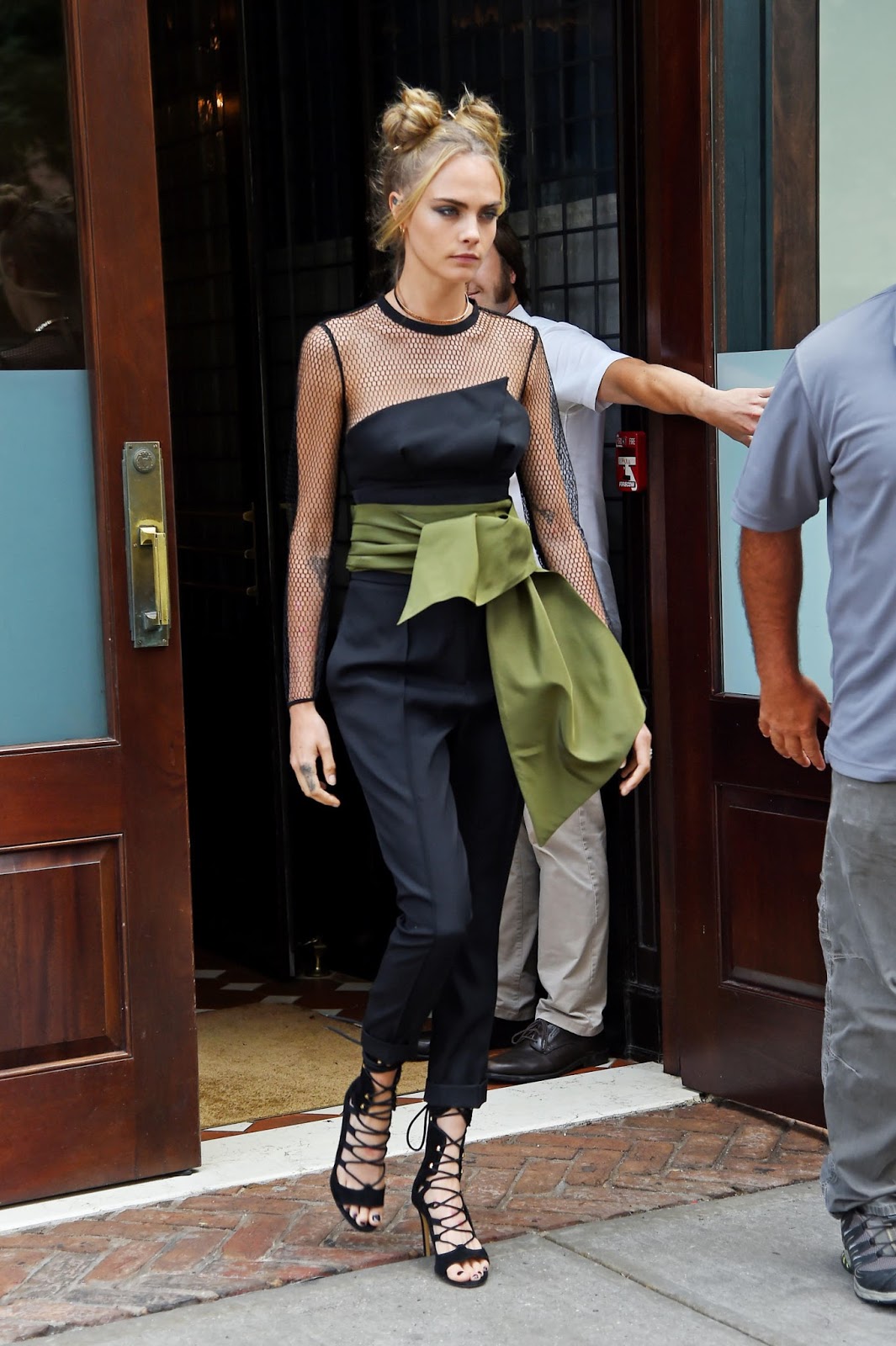 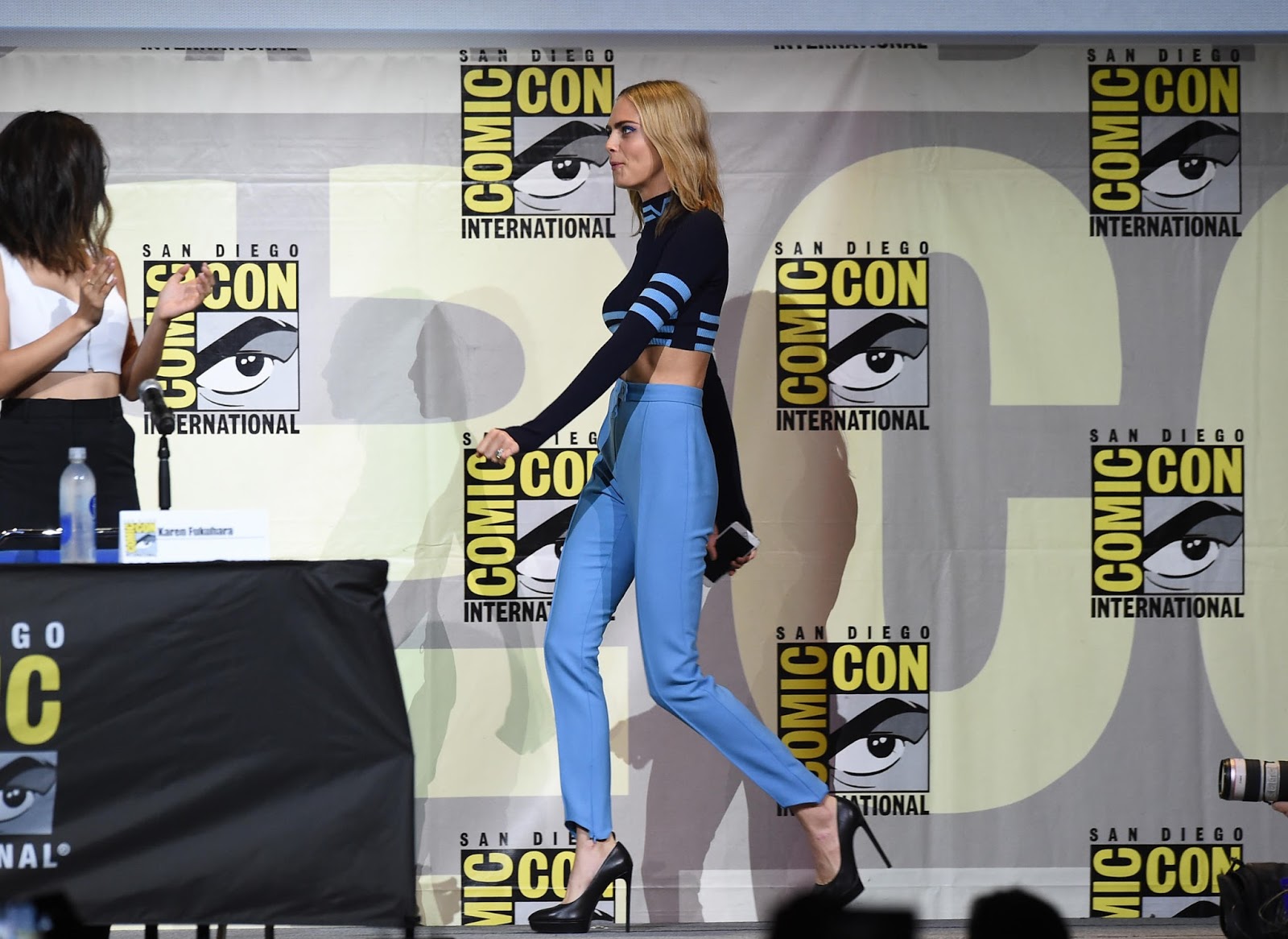 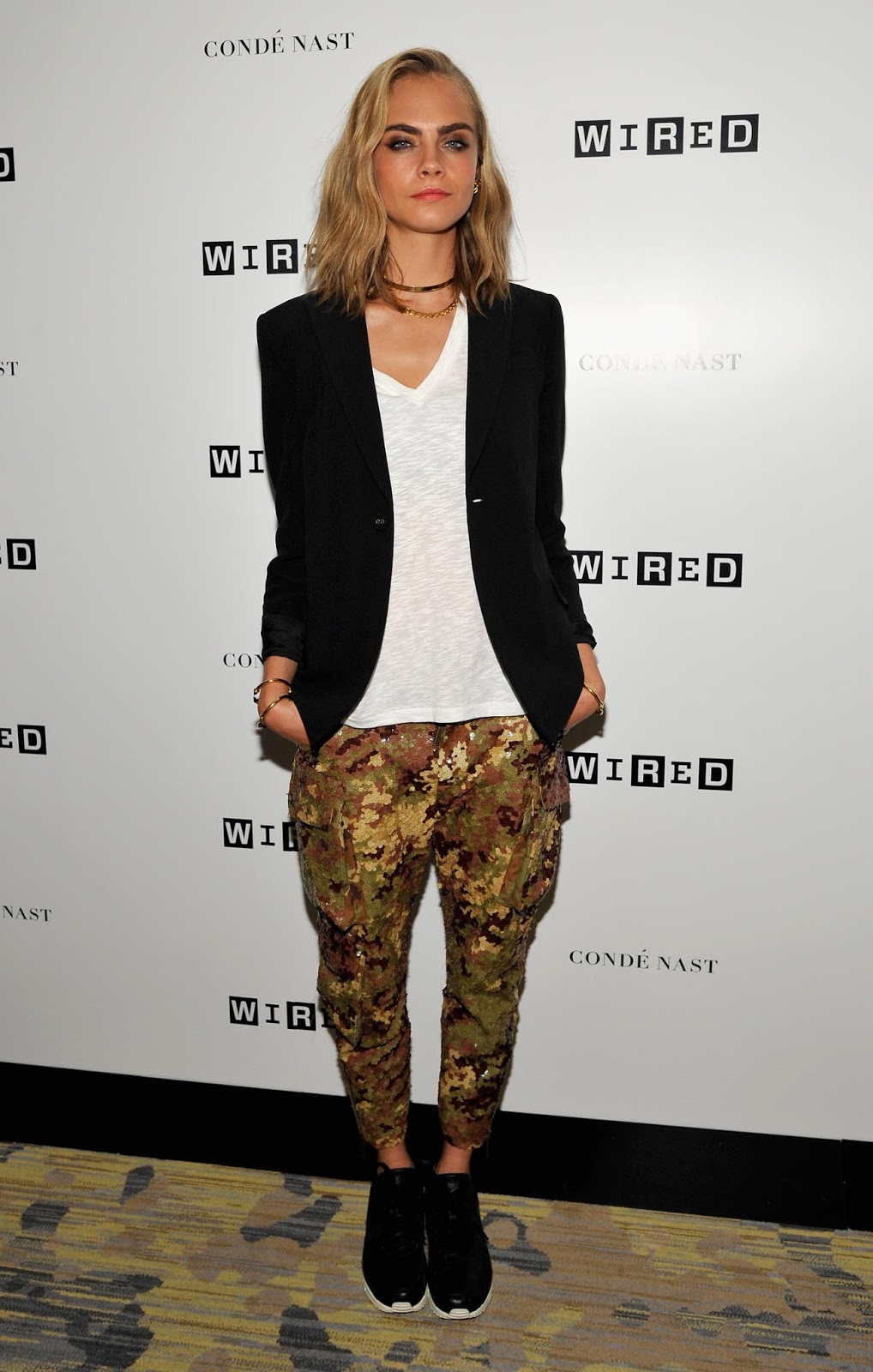 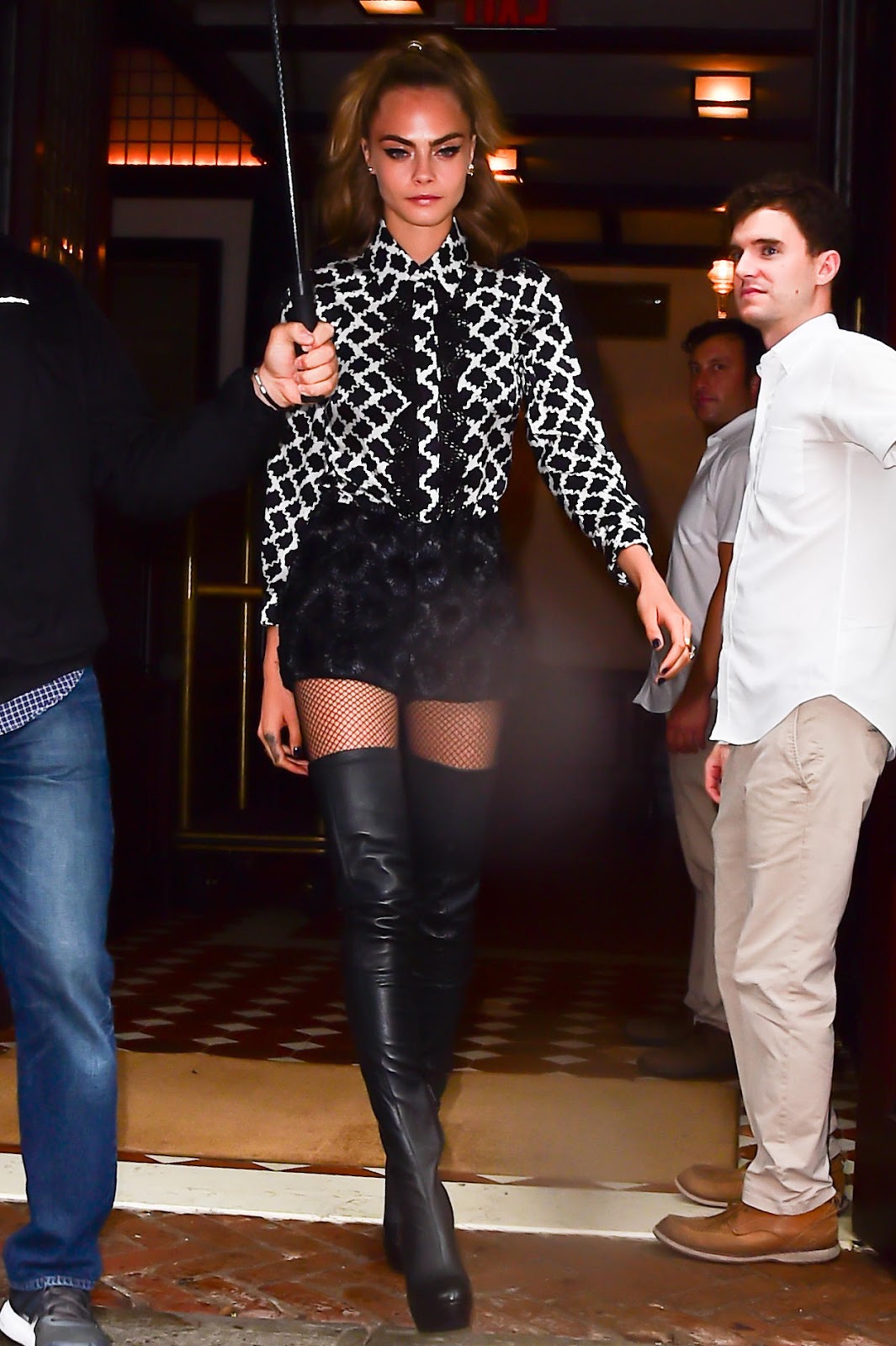 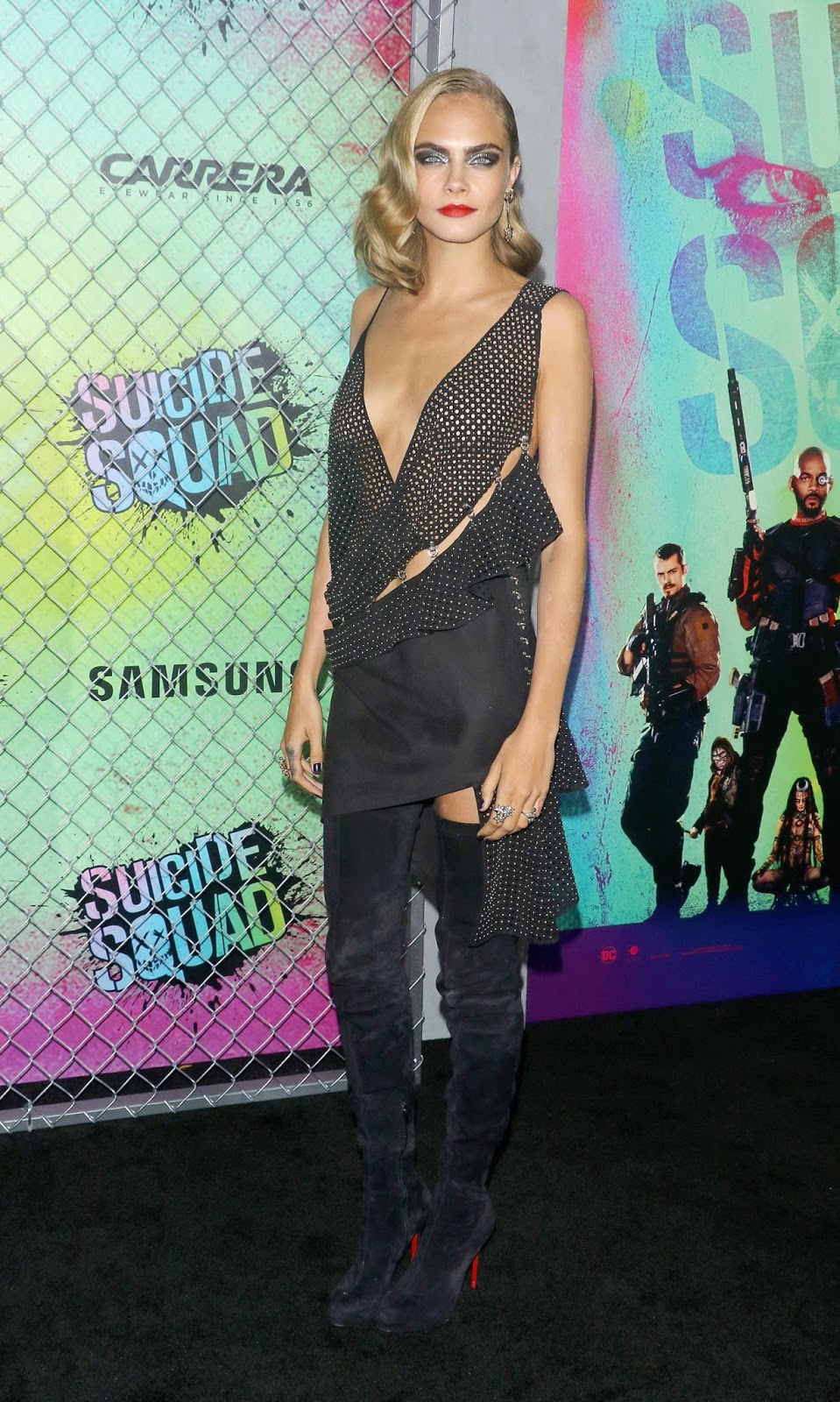 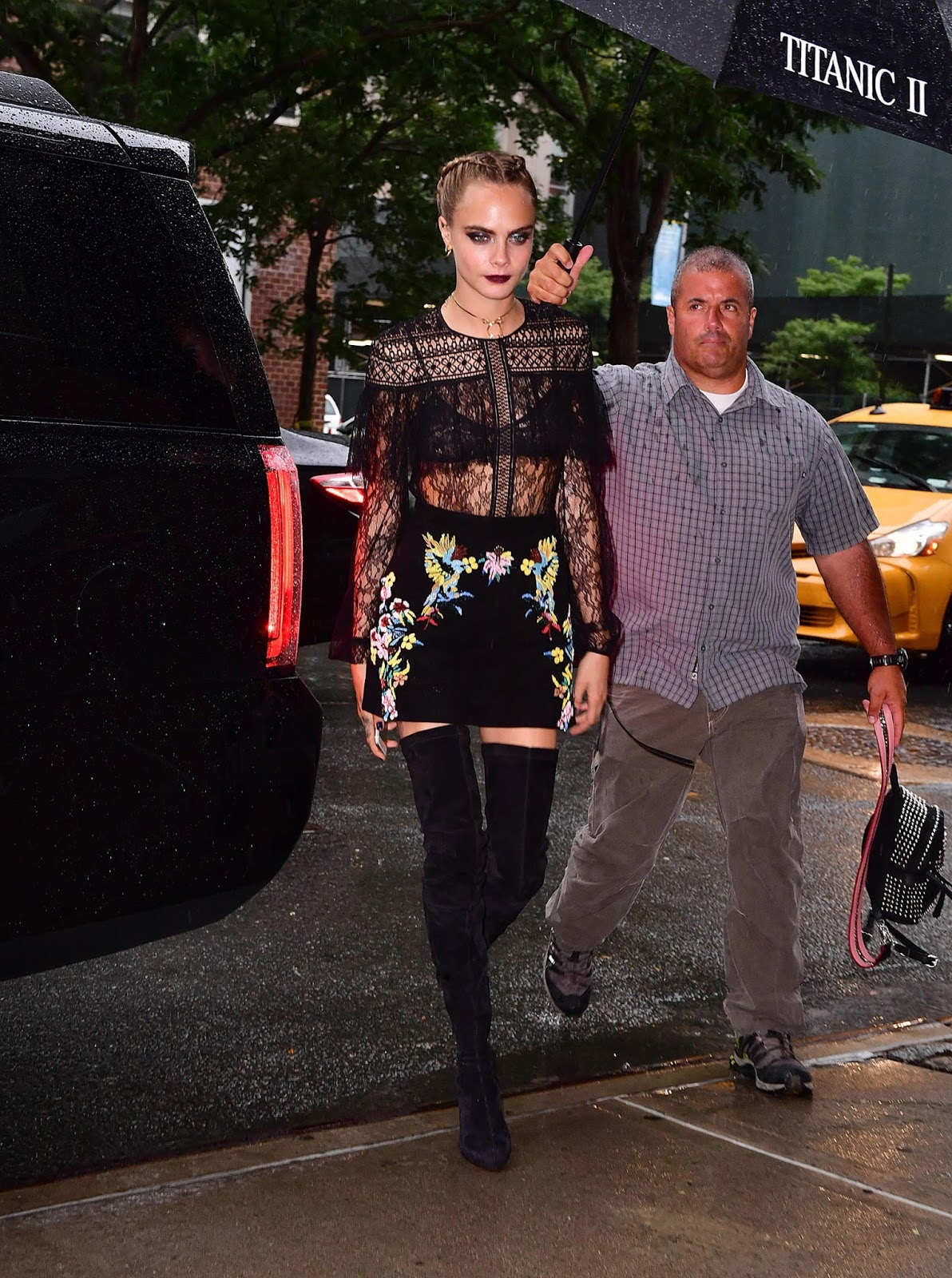 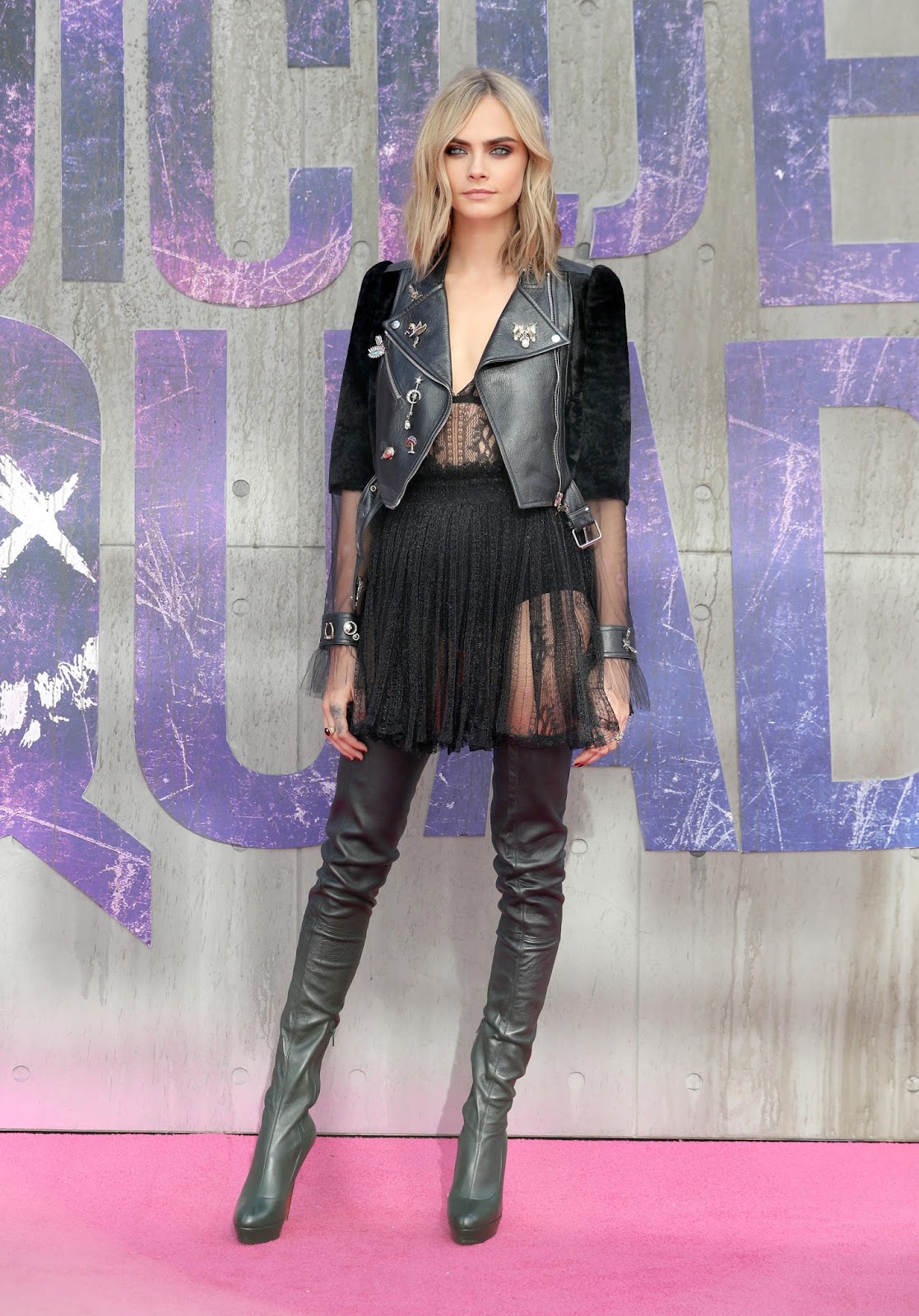 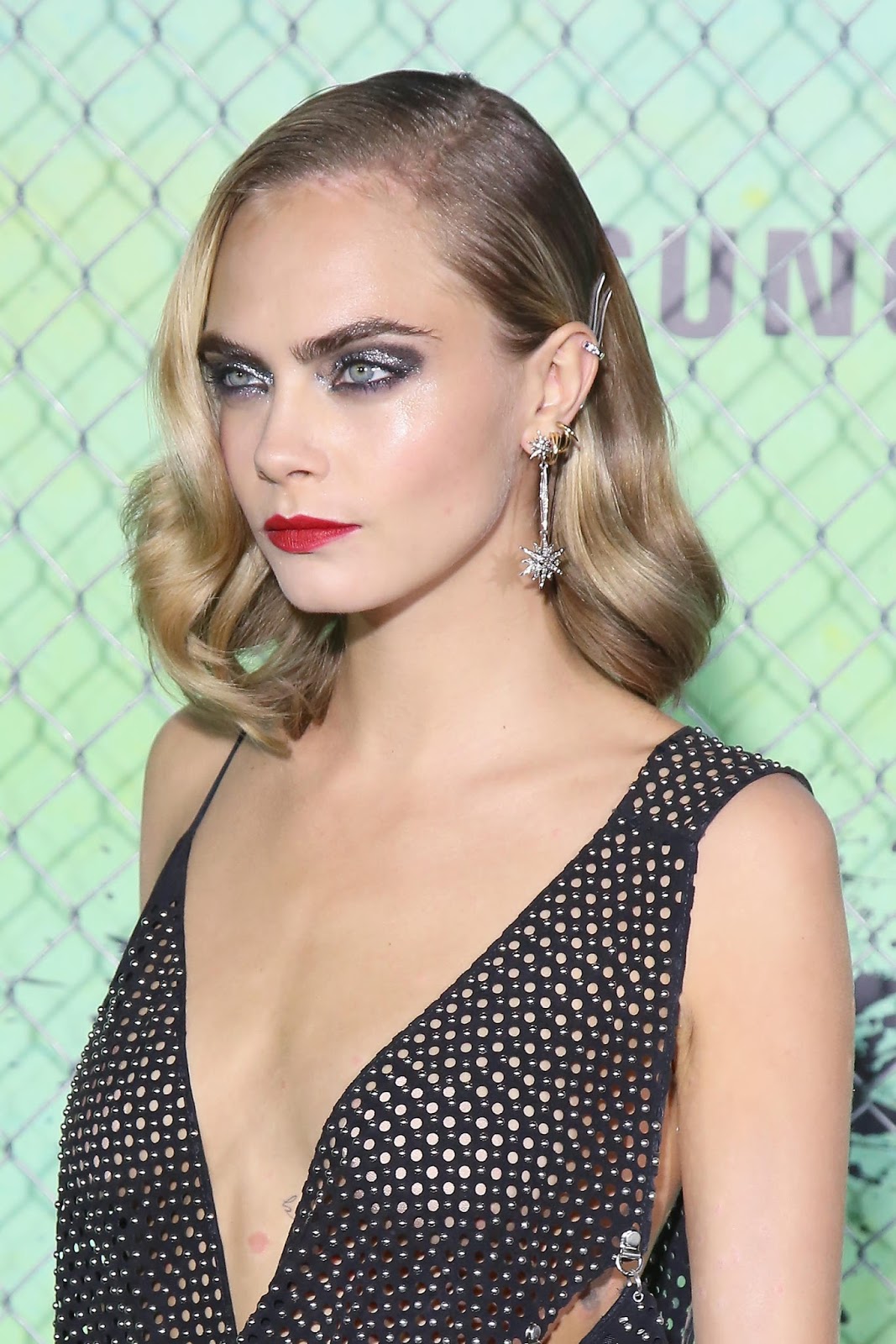 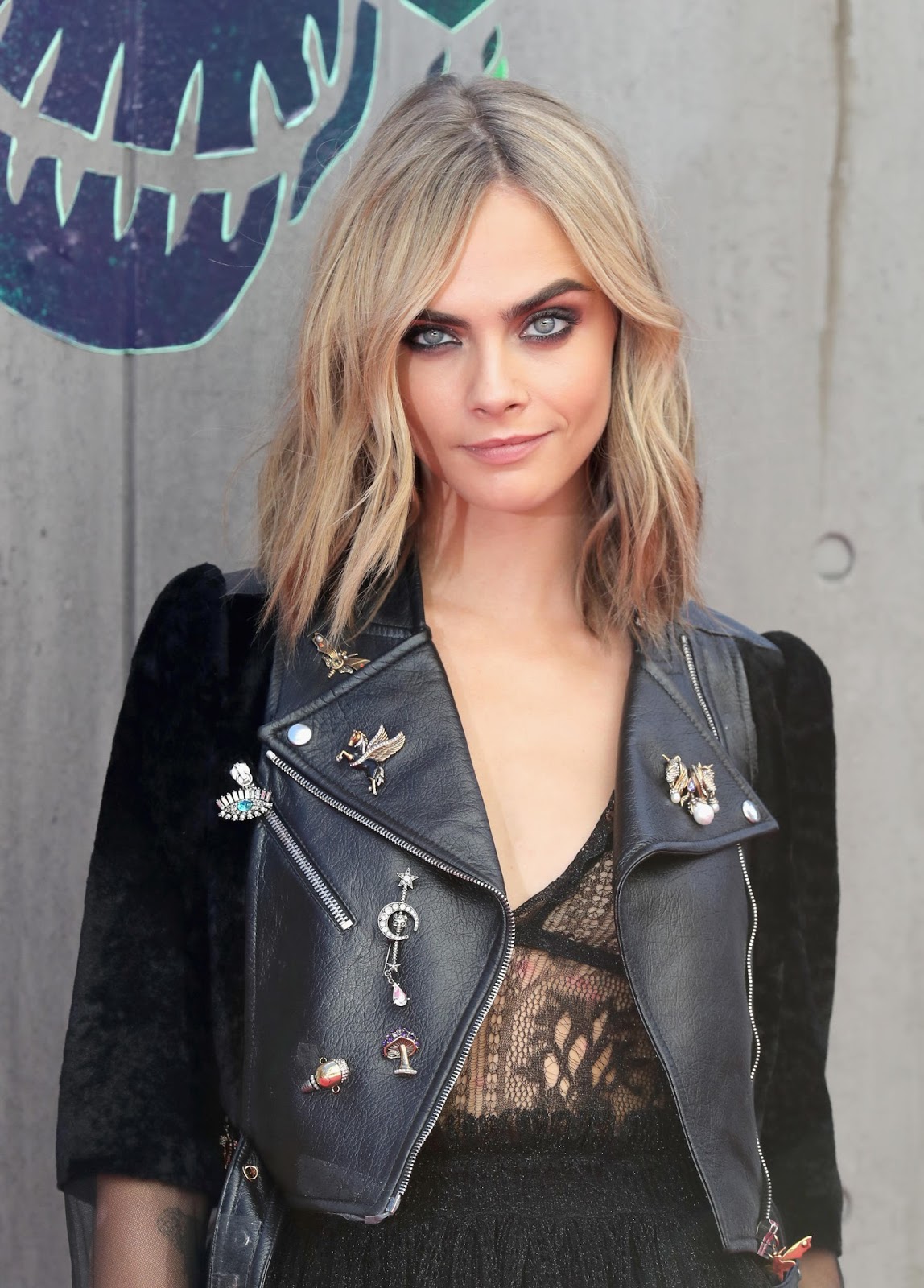 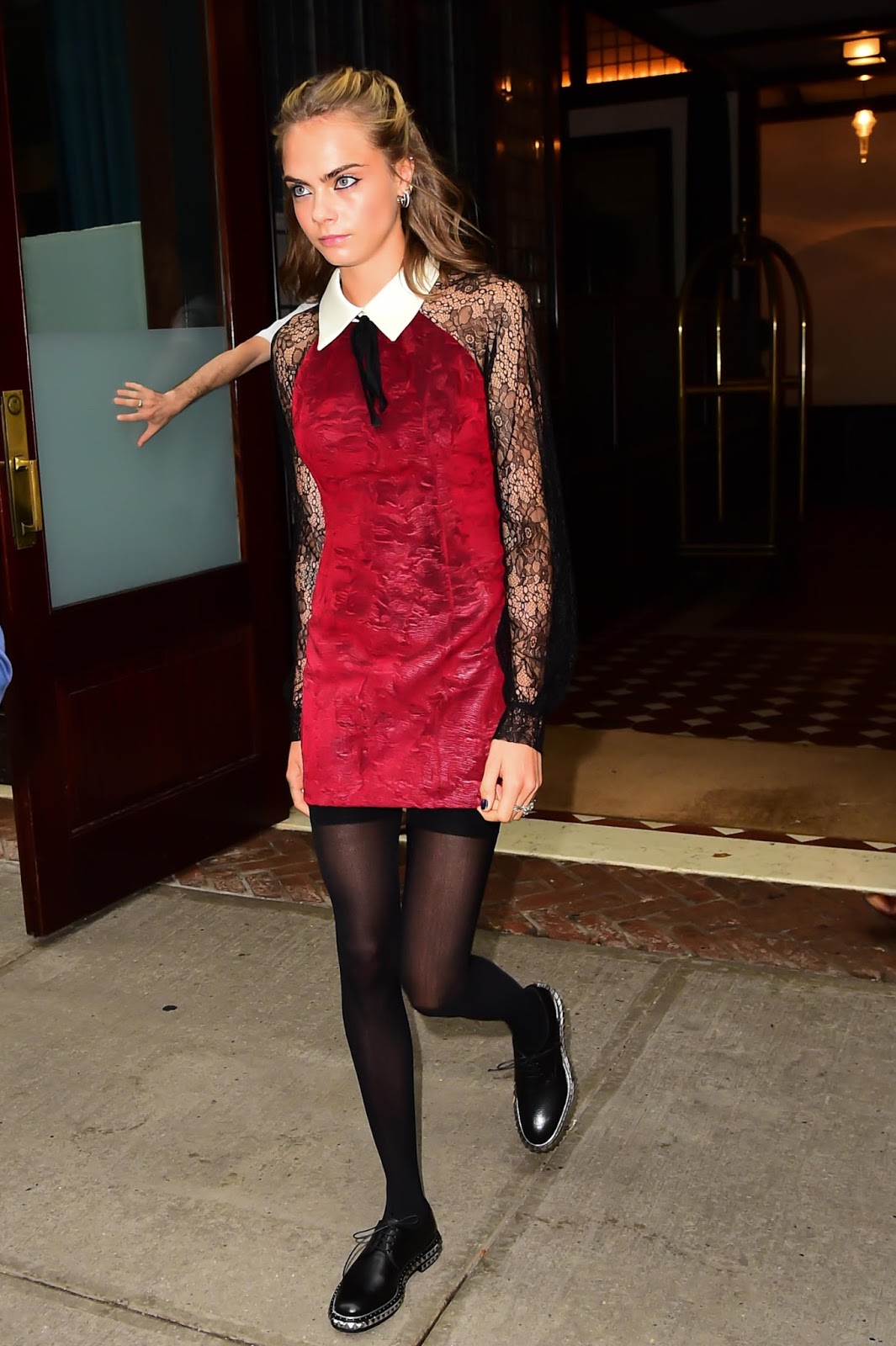 GET YOUR NYC TICKETS NOW

Maura's Favorite Pair of Shoes Got the Enamel Pin Treatment

Must Read: Hearst Launches September Issue Ad Campaign, An Inside Look at the New 'Teen Vogue’

While we're always happy to have a little relief from the red carpet insanity of awards season, summer can also be a bit dull on the fashion front. Thankfully, one of the season's biggest releases also stars two of our favorite stylish actresses: Up-and-coming Margot Robbie, and erstwhile supermodel Cara Delevingne. While they've both been burning up the "Suicide Squad" press tour with amazing looks, Delevingne's sartorial choices in particular — packed with thigh-high boots and sheer fabrics — have had us swooning.
Delevingne's "Suicide Squad" wardrobe comes courtesy of styling team Rob Zangardi and Mariel Haenn, who worked with Delevingne on her first proper press tour as an actress for 2015's "Paper Towns." Because she was making her major film debut, the duo focused more on bringing Hollywood glam vibes rather than leaning on her fashion cred. "When we styled the promo tour for 'Paper Towns,' our goal was to maintain Cara's effortless, cool-girl vibes but to add movie star polish," Haenn says. "We kept things whimsical yet intellectual, adding touches of Cara's quirky personality and avoiding anything too high fashion."
Unsurprisingly, a super-villain movie like "Suicide Squad" has quite a different vibe from the kind of teen drama penned by John Green. Delevingne's Enchantress is pegged to be the baddie of the movie, which means Zangardi and Haenn could go for an edgier look. "You want to give a nod to the character without being too literal, so [we did] some darker colors, and the thigh high boots came in to give in a rock and roll, goth type feel," Zangardi says.
They pulled a bunch of options and brought Delevingne in for fittings, where she weighed in on the looks (and was also a lot of fun — Zangardi says there was plenty of dancing involved). Once they had everything narrowed down, they worked to be sure that every ensemble told a cohesive story and that every event had an appropriate look; that meant a laid-back DSquared² look for San Diego Comic-Con, a buttoned up Emanuel Ungaro set for press junkets, and a jaw-dropping Alexander McQueen dress for the London premiere (Zangardi and Haenn's favorite).
Of course, it's not hard to make a supermodel look good. "Wearing a pair of thigh-high boots and a really mini short isn't a look that most girls can pull off, but because she has the exceptionally long legs, she's able to pull off a little bit more than some of the other girls." And Delevingne's day job means she's more open to trying experimental looks, never hesitating to try on things that might look "completely insane" on the hanger. "Cara is extremely open to trying new things. She's basically a dream client," Haenn says.
At the end of the day, though, both Zangardi and Haenn say that working with Delevingne is such a pleasure because of her personality and her own quirky off-duty style. "We don't have to take fashion so seriously," Zangardi says. "It was about giving her a bit of an edge without taking it too far, and letting her sense of style come out."
"She has such a great sense of who she is, both as a person and in terms of her personal style," Haenn says. "As a result, there is a strong point of view but at the same time, she's always open to experimenting and pushing the envelope. It feels truly collaborative with her."
See all of Delevingne's killer "Suicide Squad" press tour looks in the gallery below.

app founder hits back at critics

Move towards "greater and greater" transparency cannot be stopped, he says
by Melanie Gerlis  |  4 August 2016

Magnus Resch
Print Email Facebook Twitter
More
Magnus Resch, the art market entrepreneur behind the Magnus price data app, has responded to claims that his service had stolen information from other databases and galleries. The free app, which combines aggregated public information with digital recognition technology, also includes prices, the holy grail of the primary market.

In July, the Magnus app was removed from the Apple Store on the back of copyright claims from three German galleries who asked for images—as well as the price data—to be removed.

Resch says that his competitors are threatened by the service that the app offers: other providers charge for price data while galleries “fear they may be harmed by pricing transparency”, he says.

Soon after the Magnus app launched in April, Artsy, an online art database that partners with galleries and institutions, complained about copyright infringement of certain images. Resch acknowledges that Artsy had a valid claim and says that he removed the relevant images from his app, which Graham Newhall, Artsy's communication manager, confirms. Newhall says that Artsy, whose co-founders include the mega art dealer Larry Gagosian, has made no subsequent complaints. Newhall says that “innovation and technology in the art market is potentially good for everybody, but our strong concern was to protect the copyright and privacy of our partner galleries, auction houses and institutions.”

Another online database, ArtFacts, headquartered in London but operating out of Berlin, complained to Apple about Magnus lifting its data, also soon after the app's launch. Resch says these claims have “no substance”.

Marek Claassen, the director of ArtFacts, says that while he agrees that “transparency in the primary market is needed”, it would have been “normal business practice” for Resch to have licensed data from others in the industry.

Magnus launched with more than eight million gallery and auction prices, together with information about the artists and their exhibitions. Galleries' websites are the building blocks of the service and Resch uses an outside data collection business to gather information—around 80 people have been working on the app since 2013. Another one of Resch’s initiatives, Larry’s List, similarly trawls through a huge amount of publicly available information to present data on art collectors worldwide.

Much of the other information (photographs, primary market prices) on Magnus is user generated, which is providing a challenge to copyright laws in several industries. However, Resch says, “I don’t see any gallery asking Instagram to take down images.”

Resch adds: “This move towards greater and greater transparency… cannot be stopped. Whether we are challenged in the press, or threatened with lawsuits, we will fight it and win—the app will be up again soon.”