Putting the Art Back in Art History 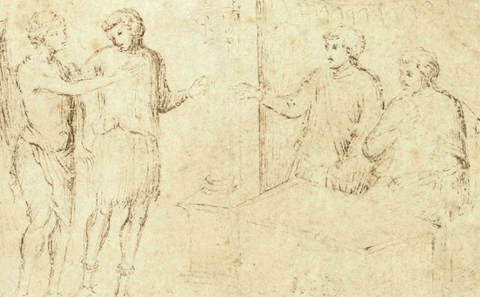 Putting the Art Back in Art History

Christopher S. Wood’s A History of Art History will be eye-opening for anyone who cares about art. Provocative Art Books to Check Out 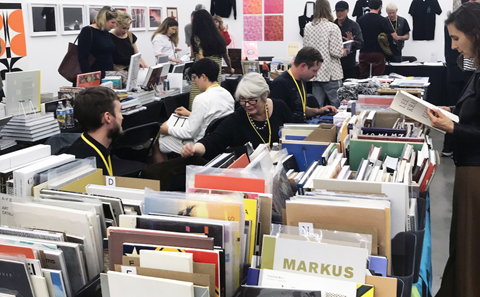 The Acid-Free Art Book Market brought forth booksellers in tune with the cultural and sociopolitical zeitgeist, offering books on detention center architecture, monographs in translation, and new underground periodicals written by people living in the margins.


LOS ANGELES — With the holiday season right around the corner, Blum & Poe’s second annual Acid-Free Art Book Market was the perfect place to find gift-giving inspiration. More than 90 vendors laid out a plethora of unique, intricately designed books that would upgrade any art lover’s coffee table. There were stunning feats in book binding, eye-popping graphic design, and rare limited edition prints. Acid-Free also brought forth booksellers in tune with our current cultural and sociopolitical zeitgeist, offering art books on detention center architecture, monographs in translation, and new underground periodicals written by people living in the margins.
While the book market has come to a close, you can still find these titles in your local bookstores and online. Below are some highlights that will add a new dimension to your bookcase or pleasantly surprise at a White Elephant exchange.
***


The pages of this book, sandwiched between unbound hard-covers, unfold like an accordion. The collection is a two-in-one combination of contemporary photography from husband-and-wife duo Ed and Deanna Templeton. Known for illustrating Southern California life through skateboarding (Ed) and leisure (Deanna), this collection of suburban slices of life from Huntington Beach shows the slow-changing, simplicity of days spent in tract housing. Though most of the photos have been taken in the last two years, the black and white duotone pages portray Orange County as a nostalgic wonderland.


In 1981, Colombian artist Beatriz Gonzaléz reimagined Pablo Picasso’s “Guernica” as a massive, 40-foot-wide tiled mural called “Mural Para Fábrica Socialista.” Over the course of the year it took to complete the project, Gonzaléz chronicled her labor, musings, and creative process in a diary, which Mexico City-based Zolo Press has translated and published in conjunction with Gonzaléz’s first large-scale retrospective in the United States at the Pérez Art Museum Miami. In addition to the diary, Zolo Press released a limited-run audiobook in LP format. The cover of the 280 editions are to-scale fragments of Gonzaléz’s mural, and are signed by the artist herself.


There were a number of Dan Graham books at Acid-Free, signaling the conceptual artist’s enduring legacy. Though Graham is well known for his architectural interventions, notably spiraling glass pavilions that blur the line between a sculpture and building, Publication Studio instead reproduces Graham’s lesser viewed graph and typewriter drawings. The minimalist, geometric designs show the kinship between Graham and other artists he championed, like Sol LeWitt and Donald Judd. Originally published in 1990 for an exhibition at Galerie Bleich-Rossi in Graz, Austria, the book also includes reproductions of German-language advertisements that ran in the original catalogue.

Undocumented: The Architecture of Migrant Detention by Tings Chak


Chak is a Hong Kong-born multidisciplinary artist and migrant justice organizer based in Toronto, and created this illustrative book as a way of charting detainees journeys through Ontario detention centers. “In these pages, you will find an incomplete view into the world of migrant detention in Canada, explored at scales descending from physical landscapes to the human body,” Chak writes. The architecture is striking in its banality; bureaucratic, sterile, and repetitive, a detention center is a mind-numbing maze with few windows and omnipresent security cameras. Chak also includes an interview with Martin, a former detainee from Gambia, who was held for 36 months without charge or trial. Martin led a hunger strike that led to the creation of Canada’s End Immigration Detention Network, to which Chak donates all the royalties from the sale of this book.

The HIV Howler, edited by Althea Black and Jessica Whitbread


In the spirit of grassroots publications that thrived in the 1980s and early ’90s, Black and Whitbread have created a periodical exclusively featuring contributions from writers with HIV Positive statuses. The HIV Howler’s tagline, “transmitting art + activism,” acutely describes how the paper gives artists a platform to speak on the issues’ themes like ”criminalization-medicalization,” which juxtaposes how medical institutions villanize HIV/AIDS patients, but also gatekeeps access to medical treatment, and “mentor-mother,” women healthcare workers living with HIV who educate positive mothers and pregnant women who may be raising a child with HIV. Black, who lead a discussion at Acid-Free, told Hyperallergic that she sees the newspaper “as a curatorial project for artists with HIV, and it expands the conversation past the hubs of NYC and San Francisco. We publish globally.” Contributors hail from Poland, Brazil, Taiwan, Puerto Rico, and more. Currently, The HIV Howler’s biggest obstacle is funding shipments worldwide, and purchasing an issue for $5 helps Black and Whitbread freely distribute the publication abroad.


In Arabic, the word molatham literally translates as “to cover one’s face,” but in the West Bank, the phrase is used to describe anyone resisting Israeli Occupation. In a book-length monologue, Caruth offers a meta examination of portrait studios in Palestine, places where people who typically remain anonymous out of fear of persecution. Molatham documents six years of research Caruth conducted in two prominent Palestinian photography studios, tracing subjects’ paths from standing in front of the lens to their likeness being mass distributed on the streets.


This book highlights pieces from the collection of rare pigments preserved at the Straus Center for Conservation and Technical Studies at Harvard University. The center has more than 2,500 pigments, and, according to an Atelier Éditions representative at Acid-Free, “shows the impact of color pigmentation through art history.” While popular in their day, some pigments could never pass FDA regulations in the present; bright yellows contained monkey urine, and rich greens used for textile dyes pulled their color from poisonous arsenic. “Pigments affects how art looked, produced, and conceived in that specific time and tells a story.”


Forsgren, who was managing his table at Acid-Free, described his book as “an imagined journey to Greenland comprised of archived photos and maps smeared by polar projections.” Between 1891-92, Robert E. Peary made an expedition to Peary Land, a remote peninsula in Northern Greenland, and put it on the map — with great cartographic errors that directly led to the demise of other arctic explorers. It would take 20 years to correct his mistakes and make the polar desert navigable. Though Peary Land is now home to a small research station, it remains difficult to reach, and satellite imagery struggles to recreate the landscape on Google Maps. Forsgen’s book is divided into three parts: the first uses Peary’s archival images to tell a fictional story of its discovery, the second showcases Peary Land’s glitched, technicolor projections, and the last part culls geotagged photos from Flickr, which place palm trees and bustling waterfronts in desolate Greenland.


First published in 1973, this guide to womanhood — from abortion, to marriage, to art, to self-defense — was an influential text of the second-wave feminist movement. Inspired by Stewart Brand’s Whole Earth Catalog, which advocated for self-sufficient, countercultural living and shared how to obtain products and resources to do so, The New Woman’s Survival Catalog compiled a vast network of safe spaces for women and recommended art, film, and books that pushed an aspirational cultural shift towards feminist-forward thinking. To make the book, Grimstad and Rennie took a road trip across the country, interviewing lesbians living in communes in Atlanta and women farmers building barns in Northern California. Though the catalogue had blind spots regarding the spectrum of gender identity, it unearthed the breadth of women declaring their independence across the country. Sensing that today’s generation of women are hungry for more radical change in society, Primary Information has re-issued the New Woman’s Survival Catalog to guide young activists.


Relive your days in academia with the various course readers put together by lo-fi Cassandra Press. “They’ve always been a part of my art practice,” explains Kandis Williams, a Cassandra Press co-founder who creates  assemblages of theoretical texts around themes like misogynoir, interraciality and PTSD, porn and color, and Black Twitter. The readers are meant to start larger conversations on sociopolitical issues, and particularly emphasize critical race studies. For those trying to catch up with heated online discourse, these texts are a valuable resource for better understanding the tensions between fascisim vs. anti-fa, the myth of cancel culture, or why Jordan Peele’s Get Out was a revelation.
The Acid-Free Art Book Market took place at Blum & Poe (2727 La Cienega Blvd, Culver City, Los Angeles) November 1–3. Hyperallergic was a media sponsor.
Posted by Cabecilha at 2:58:00 PM No comments: