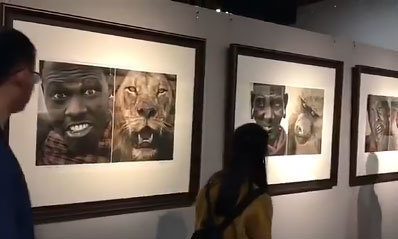 The Hubei Provincial Museum in Wuhan, China, has pulled from view its “This Is Africa” exhibit, which featured photographs of Africans shown side by side with images of animals, after it received complaints that the section was racist, Russell Goldman and Adam Wu of the New York Times report.
The offending works included a photograph of a young boy, who appears to be yelling, next to a howling chimpanzee, and a man and a lion who are both bearing their teeth.
While the images were created by the award-winning photographer Yu Huiping, who is vice chairman of the Hubei Photographers Association, curator Wang Yuejun said that it was his decision to juxtapose the portraits of Africans with photographs of the continent’s fauna.
“The target of the exhibition is mainly a Chinese audience,” Wang said in a statement. He added that comparisons between people and animals is common in China, and in some cases it’s even considered a compliment, since many people believe in the Chinese zodiac as well as proverbs, which often refer to the animal kingdom.
Wang was made aware of the racist implications of the exhibit after several African visitors to the museum complained, and to “show respect for our African friends’ opinions,” the works were taken down.
The show, which was supposed to close this week, was visited by more than 170,000 people.