One is the loneliest number: the history of a Western problem

Fay Bound Alberti
is a writer, historian and consultant. She co-founded the Centre for the History of Emotions at Queen Mary University of London, where she remains an honorary senior research fellow in history. Her books include This Mortal Coil (2016) and A Biography of Loneliness (forthcoming, 2019). She lives in London.
Published in association with The Queen Mary Centre for the History of the Emotions an Aeon Partner
1,300 words
Edited by Sally Davies

One is the loneliest number: the history of a Western problem 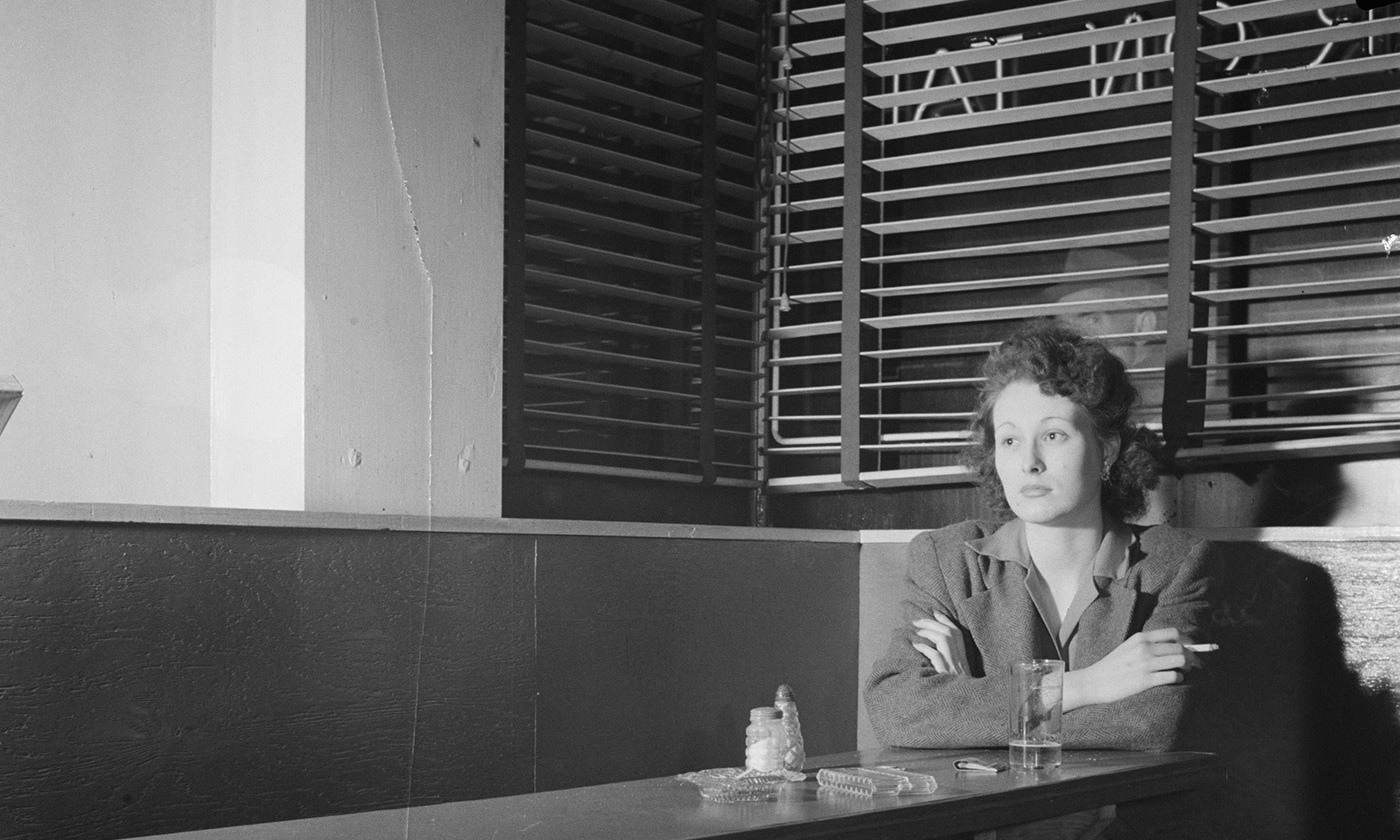 Girl sitting alone in the Sea Grill, a bar and restaurant in Washington, DC, 1943. Photo by Esther Bubley/Library of Congress
‘God, but life is loneliness,’ declared the writer Sylvia Plath in her private journals. Despite all the grins and smiles we exchange, she says, despite all the opiates we take:

when at last you find someone to whom you feel you can pour out your soul, you stop in shock at the words you utter – they are so rusty, so ugly, so meaningless and feeble from being kept in the small cramped dark inside you so long.

By the 21st century, loneliness has become ubiquitous. Commentators call it ‘an epidemic’, a condition akin to ‘leprosy’, and a ‘silent plague’ of civilisation. In 2018, the United Kingdom went so far as to appoint a Minister for Loneliness. Yet loneliness is not a universal condition; nor is it a purely visceral, internal experience. It is less a single emotion and more a complex cluster of feelings, composed of anger, grief, fear, anxiety, sadness and shame. It also has social and political dimensions, shifting through time according ideas about the self, God and the natural world. Loneliness, in other words, has a history.
The term ‘loneliness’ first crops up in English around 1800. Before then, the closest word was ‘oneliness’, simply the state of being alone. As with solitude – from the Latin ‘solus’ which meant ‘alone’ – ‘oneliness’ was not coloured by any suggestion of emotional lack. Solitude or oneliness was not unhealthy or undesirable, but rather a necessary space for reflection with God, or with one’s deepest thoughts. Since God was always nearby, a person was never truly alone. Skip forward a century or two, however, and the use of ‘loneliness’ – burdened with associations of emptiness and the absence of social connection – has well and truly surpassed oneliness. What happened?
The contemporary notion of loneliness stems from cultural and economic transformations that have taken place in the modern West. Industrialisation, the growth of the consumer economy, the declining influence of religion and the popularity of evolutionary biology all served to emphasise that the individual was what mattered – not traditional, paternalistic visions of a society in which everyone had a place.
In the 19th century, political philosophers used Charles Darwin’s theories about the ‘survival of the fittest’ to justify the pursuit of individual wealth to Victorians. Scientific medicine, with its emphasis on brain-centred emotions and experiences, and the classification of the body into ‘normal’ and abnormal states, underlined this shift. The four humours (phlegmatic, sanguine, choleric, melancholic) that had dominated Western medicine for 2,000 years and made people into ‘types’, fell away in favour of a new model of health dependent on the physical, individual body.
In the 20th century, the new sciences of the mind – especially psychiatry and psychology – took centre-stage in defining the healthy and unhealthy emotions an individual should experience. Carl Jung was the first to identify ‘introvert’ and ‘extravert’ personalities (to use the original spelling) in his Psychological Types (1921). Introversion became associated with neuroticism and loneliness, while extroversion was linked to sociability, gregariousness and self-reliance. In the US, these ideas took on special significance as they were linked to individual qualities associated with self-improvement, independence and the go-getting American dream.
The negative associations of introversion help to explain why loneliness now carries such social stigma. Lonely people seldom want to admit they are lonely. While loneliness can create empathy, lonely people have also been subjects of contempt; those with strong social networks often avoid the lonely. It is almost as though loneliness were contagious, like the diseases with which it is now compared. When we use the language of a modern epidemic, we contribute to a moral panic about loneliness that can aggravate the underlying problem. Presuming that loneliness is a widespread but fundamentally individual affliction will make it nearly impossible to address.

For centuries, writers have recognised the relationship between mental health and belonging to a community. Serving society was another way to serve the individual – because, as the poet Alexander Pope put it in his poem An Essay on Man (1734): ‘True self-love and social are the same’. It’s not surprising, then, to find that loneliness serves a physiological and social function, as the late neuroscientist John Cacioppo argued: like hunger, it signals a threat to our wellbeing, born of exclusion from our group or tribe.
‘No man is an island,’ wrote the poet John Donne in a similar spirit, in Devotions Upon Emergent Occasions (1624) – nor woman either, for each one formed ‘a piece of the continent, a part of the main.’ If a ‘clod be washed away by the sea, Europe is the less … any man’s death diminishes me, because I am involved in mankind’ . For some of us, Donne’s remarks take on special poignancy in light of the UK’s departure from Europe, or the narcissism of Donald Trump’s US presidency. They also return us to medical metaphors: Donne’s references to the body politic being destroyed is reminiscent of modern loneliness as a physical affliction, a plague of modernity.
We urgently need a more nuanced appraisal of who is lonely, when and why. Loneliness is lamented by politicians because it is expensive, especially for an ageing population. People who are lonely are more likely to develop illnesses such as cancer, heart disease and depression, and 50 per cent more likely to die prematurely than non-lonely counterparts. But there is nothing inevitable about being old and alone – even in the UK and the US where, unlike much of Europe, there isn’t a history of inter-familial care of the aged. Loneliness and economic individualism are connected.
Until the 1830s in the UK, elderly people were cared for by neighbours, friends and family, as well as by the parish. But then Parliament passed the New Poor Law, a reform that abolished financial aid for people except the aged and infirm, restricting that help to those in workhouses, and considered poverty relief to be loans that were administered via a bureaucratic, impersonal process. The rise of city living and the breakdown of local communities, as well as the grouping of the needy together in purpose-built buildings, produced more isolated, elderly people. It is likely, given their histories, that individualistic countries (including the UK, South Africa, the US, Germany and Australia) might experience loneliness differently to collectivist countries (such as Japan, China, Korea, Guatemala, Argentina and Brazil). Loneliness, then, is experienced differently across place as well as time.
None of this is meant to sentimentalise communal living or suggest that there was no social isolation prior to the Victorian period. Rather, my claim is that human emotions are inseparable from their social, economic and ideological contexts. The righteous anger of the morally affronted, for instance, would be impossible without a belief in right and wrong, and personal accountability. Likewise, loneliness can exist only in a world where the individual is conceived as separate from, rather than part of, the social fabric. It’s clear that the rise of individualism corroded social and communal ties, and led to a language of loneliness that didn’t exist prior to around 1800.
Where once philosophers asked what it took to live a meaningful life, the cultural focus has shifted to questions about individual choice, desire and accomplishment. It is no coincidence that the term ‘individualism’ was first used (and was a pejorative term) in the 1830s, at the same time that loneliness was in the ascendant. If loneliness is a modern epidemic, then its causes are also modern – and an awareness of its history just might be what saves us.