Marcel Zentner
is professor of psychology at the University of Innsbruck, where he heads the Personality, Emotion and Music Lab. He is the editor-in-chief of the journal Frontiers in Personality and Social Psychology.
Listen here
Brought to you by curio.io, an Aeon partner
1,100 words
Edited by Sally Davies 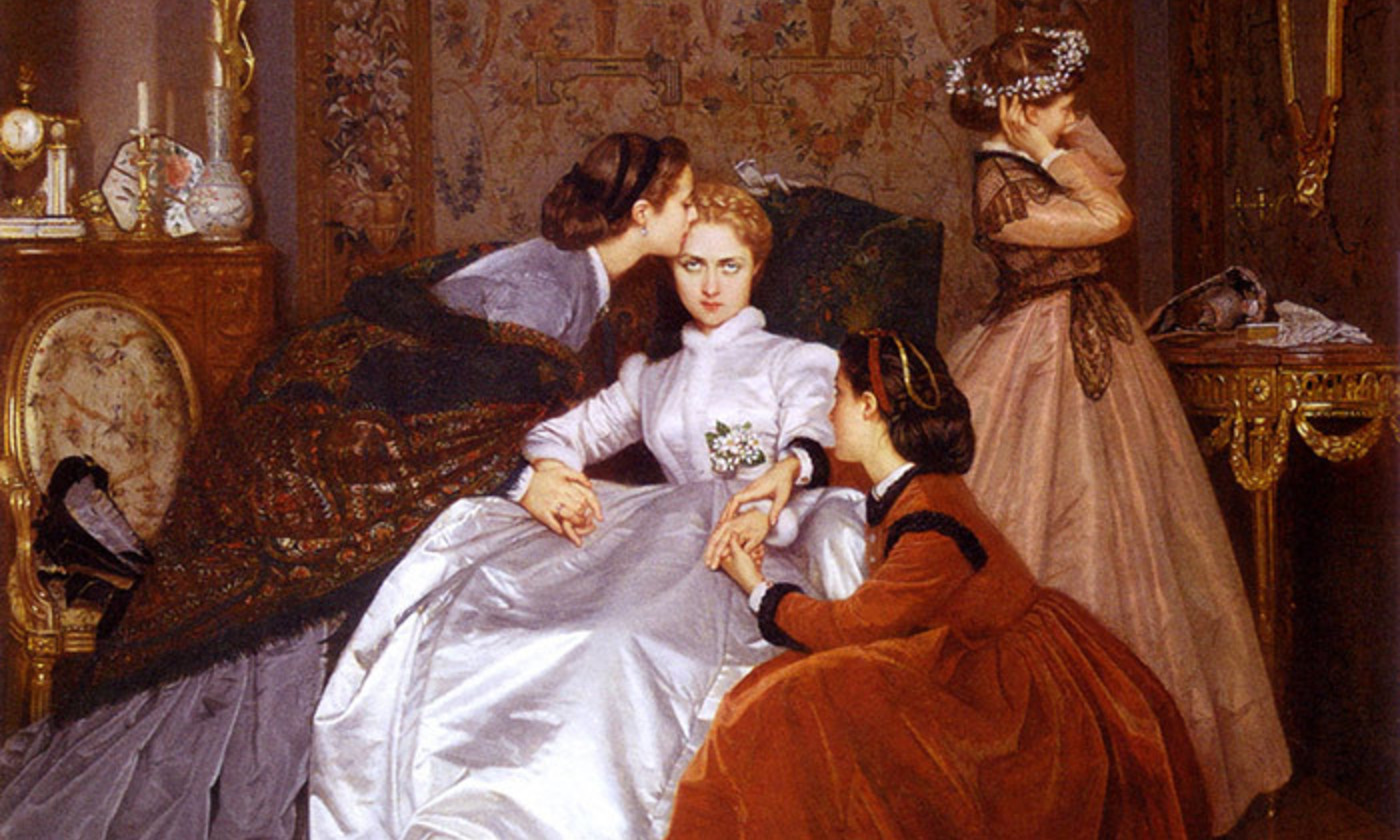 Detail from The Reluctant Bride (1866) by Auguste Toulmouche. Courtesy Wikimedia
On their first date, Mia and Josh talked as if they’d known each other for years. Josh loved Mia’s wit; Mia delighted in Josh’s warmth and ready smile. Their relationship blossomed, but doubts crept up on both of them now and again. Josh was the primary caregiver for a child from a previous marriage, and his financial prospects were dim. That didn’t really bother Mia, since Josh’s personality more than made up for it. Still, he wasn’t her usual ‘type’ – the type that was much younger than her, plus athletic and handsome to boot. Josh, meanwhile, had been dreaming of a cashed-up woman with high ambitions, status and education, ideally with a PhD (or two). Mia’s mere MA was a bit of a sticking point. It was the norm, after all, for men to be the ones to ‘marry up’.
This scenario probably sounds strange, and it should: I’ve invented an anecdote about how the heterosexual dating scene might look 100 years in the future. Currently, the desire for a young, attractive partner of the opposite sex tends to be more prevalent in men than in women. Women, meanwhile, are more likely to prioritise money and status over youth and beauty. Why?
Many evolutionary psychologists put this trend down to the power of innate biological drives. Their argument is that women have a primeval urge to hang on to wealthy men to provide for their children during the long period of pregnancy and childrearing. Men, meanwhile, are mostly concerned about a woman’s fertility, for which beauty and youth serve as helpful cues. In the distant past, this behaviour was adaptive, and so evolution selected and encoded it in our genes, forever. Sure, the rituals of modern mating look very different to those of our ancestors. ‘Nevertheless, the same sexual strategies used by our ancestors operate today with unbridled force,’ as the psychologist David Buss put it in The Evolution of Desire (2003). ‘Our evolved psychology of mating, after all, plays out in the modern world because it is the only mating psychology we mortals possess.’ (There’s little historical or intercultural research on LGBT mate preferences; such questions are clearly important, but sadly there isn’t yet sufficient data to examine them properly.)
However, there has been a tectonic shift in gender roles over the past 50 years. As recently as the 1980s, female flight attendants in the United States could be fired if they got married, and women’s right to vote wasn’t universally enforced in Switzerland until 1990. Wouldn’t we expect these changing relationship mores to make a dent in the mating preferences of straight men and women? Or are we still at the mercy of our biological destiny, as evolutionary psychologists claim?
The results from the research are clear: mating preferences among men and women look increasingly similar. The trend is directly tied to increasing gender equality, as women gain greater access to resources and opportunities in business, politics and education. In more gender-unequal nations, such as Turkey, women rate the earning potential of partners as twice as important compared with women in the most gender-equal nations, such as Finland. As with Josh and Mia, Finnish men are now more likely than Finnish women to select partners based on their high level of education.
Of course, sexism varies within each society, and a nation’s overall level of gender-equality doesn’t necessarily translate to gender-equal attitudes among individuals. But if mating preferences are biologically predetermined, individual sexism shouldn’t have an impact. However, research carried out in nine nations proves the opposite. The more gender-unequal men’s personal attitudes, the more they prefer qualities in women such as youth and attractiveness; and the more gender-unequal women’s attitudes, the more they prefer qualities in men such as money and status.
This evidence points to some serious flaws in the evolutionary psychologists’ narrative. If genes determine our mating preferences, how is it that these supposedly hardwired instincts erode in line with societies’ and individual’s gender-egalitarianism?
To be fair, evolutionary psychologists acknowledge that cultural factors and local customs can affect how people choose their partners. But gender equality isn’t considered to be one of these factors, since even in relatively gender-equal societies, the gap between men and women’s preferences is only reduced, not eliminated. However, the counter-punch is that evidence of a lingering gap actually supports our case: the difference is only narrowed to the extent that gender equality is attained. Getting rid of it entirely would require complete gender equality, which doesn’t yet exist.

Regrettably, traditional gender roles persist even in very egalitarian societies. In one Danish study, husbands whose wives out-earned them were more likely than other husbands to use erectile dysfunction medication. One interpretation is that the husbands felt under pressure to exhibit their virility, because they couldn’t claim the role of ‘provider’; another view was that the loss of breadwinner status somehow led to impotence. In another study in the US, single women downplayed their career goals and toned down their assertiveness in the hope of making themselves more desirable to men. However, if the importance that men attribute to women’s good education and earning prospects continues to grow, these tactics might eventually cease to be effective.
What if a society actually did achieve perfect gender equality? Would women and men hold essentially identical partner preferences? My hunch is that women’s and men’s choices might never completely converge. The key difference is likely to come down to the demands of breastfeeding following the birth of a child – an activity that’s energy-intensive, time-consuming, and quite difficult to integrate with paid work, at least as work is currently structured. The implication is that women will seek to replace this anticipated loss of income by choosing husbands with good earning prospects. This decision will have little to do to with some primeval urge for a great male protector, however; it will be guided by rational calculations about future needs. Moreover, progressive social policy, changes to the workplace, and greater participation of fathers in childcare could all mitigate such career-compromising pressures.
My students sometimes ask me whether gender-equal partner preferences would be desirable. They seem concerned that such equality could snuff out the spark from our love lives. Another risk is that levelling out mating preferences could lead to more marriages of equals, which could in turn entrench economic inequality. But according to the latest gender-gap report for 2017, there’s little reason for worry. Given the current rate of change, it will be some time before Josh and Mia get together: we have at least another 100 years to wait before gender parity is achieved.
Posted by Cabecilha at 7:00:00 PM