Replication Vs. Restoration: How Do We Preserve New Media Works When Old Technologies Become Obsolete? 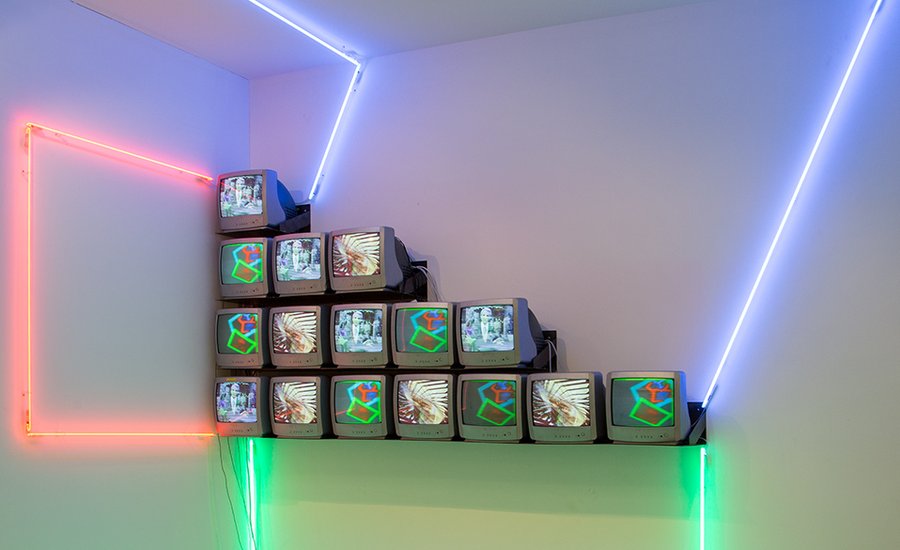 Nam June Paik, Pythagoras, 1989. Image via Fondation Dudoute.
When questioned about the extent of his legacy, Marcel Duchamp proclaimed that “art history only begins after the death of the work.” For Duchamp, to contextualize art was to kill its immediacy, and to protect it for posterity was to seal it in a tomb. One of the most exciting aspects of contemporary art is also it’s Waterloo; movements lapse from emergent to canonical in the time it takes academics to name and narrativize them, forming something of a conceptual terra incognita on the outskirts of minute-to-minute journalism. The speed with which technology is changing has accelerated madly over the last decade, so this art historical vacuum feels particularly cavernous in the context of New Media. “New Media,” a catch-all for work involving burgeoning technology that can’t quite be classified as sculpture, painting, or straightforward performance, is a forty-year old categorization at this point, and its titular implication doesn’t always reflect its content. Is a TV monitor from 1973 “New Media”? What happens when that monitor breaks and nothing exists to replace it? The taxonomical in-group of “New Media” might provide us with a framework for approaching artistic intent, but it also begs questions about rapid obsolescence and how the material conditions of technology impact the care, conceit, and exhibition of artwork. Nine to Five, Eight to Four, Seven to Three, 2015, Josh Kline via 47 Canal
A 2016 New Yorker article by Ben Lerner called “The Custodians” dives deep into the restoration ethos of the Whitney Museum of American Art, an institution that didn’t have a conservation team in place until relatively recently when its current lead, Carol Mancusi-Ungaro, stepped in. Lerner’s piece hinges on the acquisition and display of artist Josh Kline’s 3D printed objects, which are designed to stage a coup between museological oversight and disposable prototype culture through intentional ephemerality. The author takes special note of the Whitney’s Replication Committee, a fourteen-person cohort founded in 2008 that “convenes to determine when a work of art, or a part of a work of art, cannot be fixed or restored in the traditional ways—when and how it must, instead, be replicated.” While the current guiding principle of art conservation is “reversibility,” the idea that permanent intervention doesn’t necessarily honor future iterations of the work, the conceptual problematics of that dynamic come center stage when art demands a more radical plan of attack. In the case of Kline, the questions that arose from the Restoration Cmmittee influenced the timbre of the work on display, running the gamut from “Is the kind of tape holding the LED lights significant?” to “If there’s a show in, say, China, do we need to ship these objects, or can they just be reprinted there? If they can be reprinted and not shipped, could the same work be shown in two locations at once?” When an artist like Kline takes the Duchampian route, the role of conservation starts to shift—it is a player in the scope of the artwork, imbuing meaning, context, and tension for viewers and administrators alike.
Artspace asked Whitney curator Chrissie Iles to share some of her thoughts on obsolescence in New Media, and her response was thoughtful, elucidating, and generous. “The word 'obsolete' no longer means what it did,” she began, “and it is maybe helpful to think of new ways to describe the way we approach old technologies and the shifts that have occurred and are occurring.” She spoke about the importance of the Replication Committee, which is “unique in the field,” and the necessity of collaboration in situations that require specialized consideration. “Each work in our collection presents different challenges, and we approach them as a team. In the the years-long restoration of the Nam June Paik work currently on show here in Programmed was discussed at length at the committee, and a conclusion was reached together as how to proceed. We are lucky to have our AV tech, Richard Bloes, on the team, who installed the work originally, and knew Paik well. This gives him a unique perspective, and that long experience is invaluable, and thoroughly documented, on paper and on video.” Fin de Siecle II, 1989, Nam June Paik via Whitney.org
When asked about the relationship between preservation and exhibition, Iles offered this; “The key to all of this is the preservation of the experiential integrity of the work. The work can be perfect technology-wise, but if the other aspects of its presentation are not paid close attention to and strictly adhered to, the work loses its power and integrity. The display of any artwork is always a process of translation—it is being shown at a different time to that of its making, and in a different place and moment in history and art history. The key is how to identify the experiential integrity of the work, which we do when we first bring it into the collection, and then to ensure that it is that experiential integrity is kept intact. How this plays out varies according to the work in question, and has to be approached on a strict case by case basis. Each work in our collection has a detailed manual showing how it should be installed; and also when the position of a doorway can and can’t be changed, what color the walls should be, how much if any light there should be in the room, the specifics of how the sound should be experienced, what the largest and smallest measurements of the projected image are, what the aspect ratio of the image should be, whether there is a carpet in the space, and images of the work installed in the past, with notes about the differences between the different iterations, and which one the artist is most happy with. The dialogue with artists about all of this in ongoing. Since most moving image works are now editioned, we are also building a network of museums and collectors who own the same work in the edition, so that we can share information and discuss together how to best take care of, and display, the work in a way that is consistent.”
In the context of more historical New Media works, a different set of issues arises. While the use of analog equipment is decided on a “case by case basis,” Iles continues, “Some see the ubiquity of strong digital light as a form of social engineering, part of a recreation of public space as a space of total surveillance—a digital panopticon, against which soft light, if not darkness, is a form of resistance. The question of opacity, identity, and disappearance is a key strand of current scholarship regarding black experience in relation to the camera, technology, and social space. We are highly aware of this in our work.” Nam June Paik, Three Eggs, 1975-1982, via Tate Modern
Iles further provided us with an important lens through which to view the conservation of New Media; “tweaking” vs. replacement. Subtle adaptations are now the norm in restorative museological efforts, a digital extension of the “reversibility” metric lauded in more traditional pockets of of the field. She added, “It’s important to remember that all artworks in whatever medium are constantly changing, and it is a misnomer to treat objects as stable and media art as unstable. All artworks are unstable, just in different ways, with different issues.” Instead of attacking problems with genre-specific concerns, conservationists address each piece according to its own needs, reflecting an art market that is growing steadily more interdisciplinary in every imaginable facet.
Back in 2001, Howard Besser, digital preservation scholar and current director of the Moving Image Archiving and the Preservations Masters degree program at NYU Tisch School of the Arts, submitted “Longevity of Electronic Art” to the International Cultural Heritage Informatics meeting at UCLA. While much of the paper tracks outdated technology in highly specialized terms, Besser included some moments of poetic respite in the text, using existential quandaries to buoy his strategic troubleshooting procedures. “The most critical element to saving a work of electronic art is first determining what that work really is, how far it extends, what its boundaries are, under what technical environments it should be shown etc. This is an activity that must be undertaken jointly between a curator and conservator, and is likely to involve the artist as well,” he states, continuing, “Though traditional forms of theater and music have well-developed approaches to finding a canonical form that forms the basis of most instanciations (performances) of that work, more contemporary art forms have not yet explored how they can create a canonical form. With many contemporary works, canonical forms can be more effectively sought for groups of works sharing common approaches (rather than by general form or genre). For example, the canonical form of groups of works by John Cage, Sol LeWitt, and Dan Flavin may be a set of formulas and instructions for each work, and each performance, piece or installation might be a variant form of a given work. As we being to understand more about contemporary forms of electronic art, the application of semiological analysis to groups of works may lead to the development of ways of expressing canonical forms for subgenres of electronic art.” Friederike Pezold, Die neue leibhaftige Zeichensprache, 1973-76, via SculptureCenter.org
When we consider "canonical forms" for the preservation of art that shirks, challenges, or antagonizes the notion of "canon" by virtue of its material embodiment, siloed agendas or pre-conceived operations start to fall away in service of a more tailored, wholisitic approach. Art conservation departments are borrowing from the both scientific and intellectual outlooks of their analog predeccesors to create the most authentic viewing experience possible for visitors. "Authenticity," even as it applies to synthetic, projected, or appropriated content, is not just a function of artist objectives or institutional fabrication; it requires an un-interrupted experience of the work free from the distractions that stem from decay or overcompensation. By striking a middle ground between fetishizing destruction and erasing authorship, the sort of authorship that is more relevant than ever in the altermodern digital landscape, conservationists of New Media are applying the kind of forward-thinking, practical imagination such cutting-edge fare requires.