20th-Century Masterpieces You Need to Know 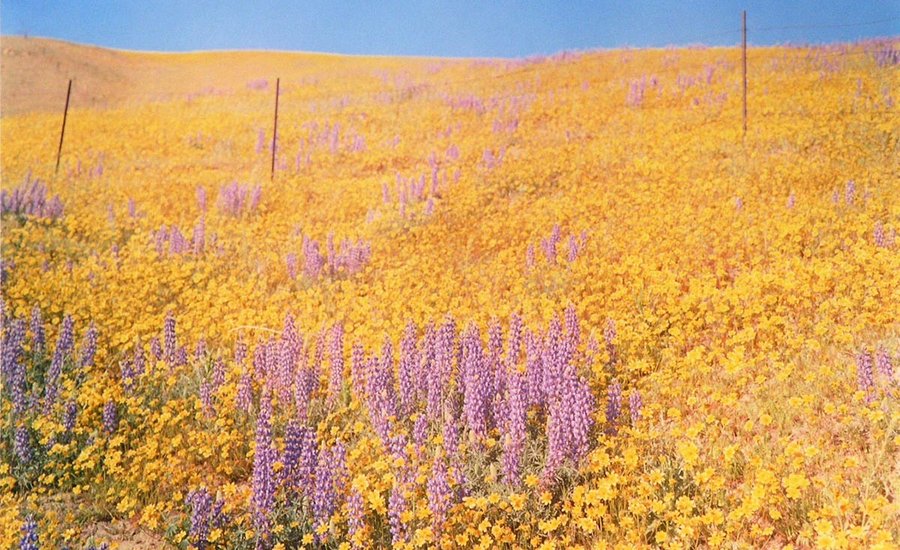 William Eggleston, Untitled (field of yellow and purple flowers), 1978. Image via Highsnobiety
It's almost hard to believe that the turn of the century was already 18 years ago, and yet, so many great artworks have come to fruition since (see 12 Masterpieces of 21st Century Painting You Need to Know Now). Here we look back to 20th century to the artists who saw (and helped) modernism (and post-modernism for that matter) come to life. The following 10 artworks, excerpted from Phaidon's The Art Book, 30,000 Years of Art, and Body of Art, represent a selection of 20th-century masterpieces. 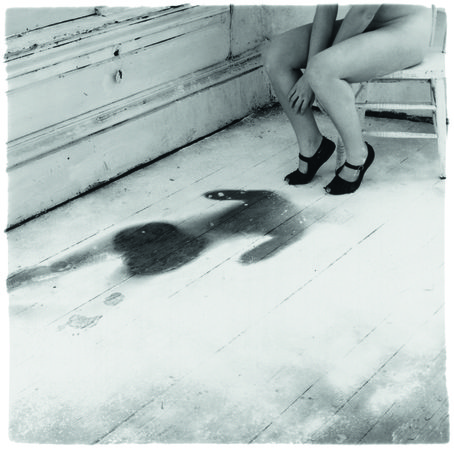 Francesca Woodman (1958-81) made this photograph of part of a person and a trace of a body when she was a university student in Providence, Rhode Island. She constantly experimented with space and light, and often chose dusty and dilapidated interiors as the setting for her atmospheric and elusive images. For reasons mainly of convenience, she became her own frequent model. Here, in a bare room flooded with sunlight, she appears in a sort of double disappearing act, a play of positive and negative forms. Sitting in a corner, with only her arms and lower body in shot, she seems to have unhitched herself from the shadow, which lies upside down at her feet, its head nearly touching the toes of her shoes. The silhouette looks almost like a photogram (an image made by placing objects directly onto a light-sensitive surface) and contains another trace––a naked footprint––within it. Noticing this detail, it is tempting to search the image for other forensic clues to its construction––but what meets the eye is an array of lines formed by floorboards, moldings and wainscot, leading to an invisible vanishing point somewhere far beyond the seated figure.
HERE I AM, HERE I STAYLouise Bourgeois1990 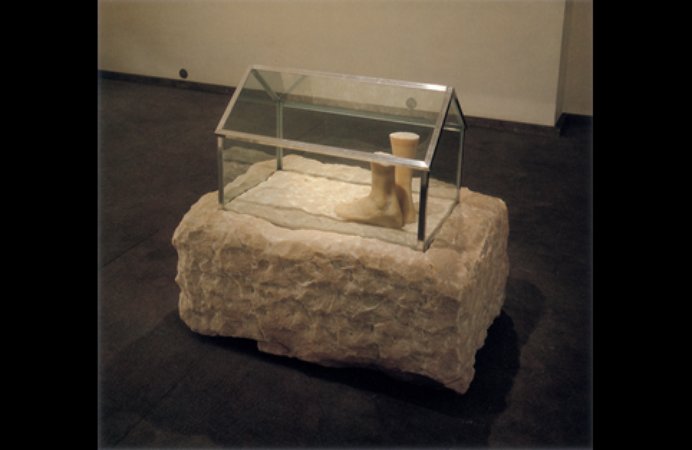 Encased within a glass casket, a pair of truncated human feet are firmly placed on a roughly hewn block of marble. Perhaps alluding to the triumphant order man has created out of the disordered chaos of nature, the elemental qualities of the materials––marble, glass, metal––evoke the timeless world articulated by human endeavor. Great attention has been paid to the sensual surfaces, ranging from the roughness of the stone hewn from the earth to the smoothness of the man-made glass. Bourgeois' work is frequently suggestive of the human form, often in a remote, abstracted context. The dynamic tensions of opposing materials and finishes raise provocative responses to the physical presence within the natural environment. Bourgeois moved to New York from Paris in 1938 where she had worked with the Surrealists. Initially a painter and engraver, she turned to sculpture in the late 1940s.
RECUMBENT FIGUREHenry Moore1938 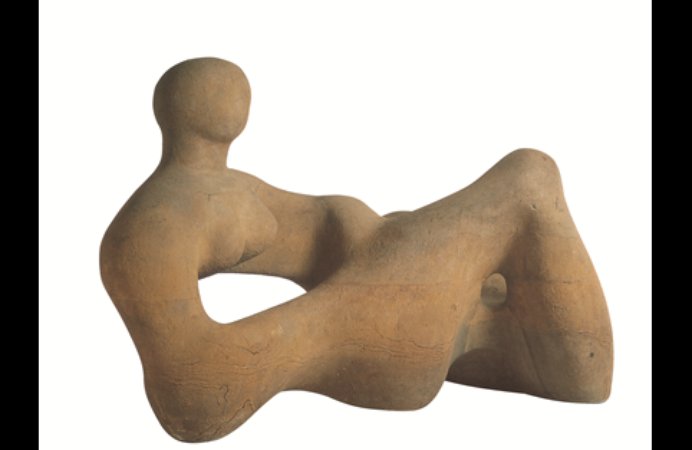 The most influential British sculptor of the twentieth century, Henry Moore (1898-1986) found inspiration in the artistic traditions of African, Cycladic and Pre-Columbian cultures. With his exploration of the human form, Moore sought to link his sculpture with the art of the past, while simultaneously eradicating "the Greek spectacles from the eyes of the modern sculptor." Recumbent Figure bears comparison with the Modernist sculpture of Constantin Brancusi Golden Bird, both for its simplification of form and for Moore's practice of carving directly from stone. (Like many of his works, Recumbent Figure is carved of indigenous British stone, mined in Oxfordshire). He claimed that his greatest source of inspiration was the Mayan reclining sculpture type called chac-mool whose recumbent pose and aura of immense size is recalled here. The English landscape tradition, with Constable and Turner at its helm, was also an intrinsic part of Moore's inherited artistic legacy. His biomorphic forms evoke both female figures and metaphorical landscapes: the sharp, raised knees and globular breasts of Recumbent Figure suggest mountains and hills, and the niches or hollows imply cliffs, caves, valleys, and undulating slopes. Moore said of this favored pose, "the reclining figure gives the most freedom, compositionally and spatially... It is free and stable at the same time. 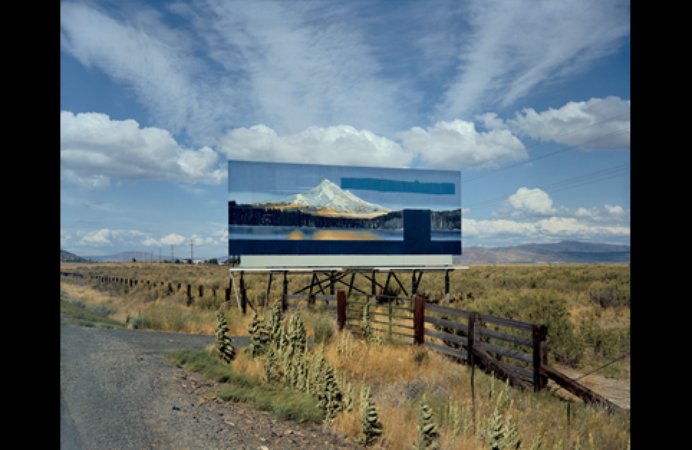 The image of a vast landscape obstructed by a banal man-made image of nature is Shore's ironic comment on both. Published in Uncommon Places (1982), a series of photographs taken on road trips across the USA between 1973 and 1979, it exemplifies not only Shore's fascination with everyday intersections between the American people and their landscape, but also his brilliant color sense. Shore was a leading representative of the so-called New Topographic school of photography, which arose in the mid-1970s. "Stylistic anonymity" was the aim of these photographers, who were inspired by Conceptual art; pictures were "stripped of any artistic frills... eschewing entirely the aspects of beauty, emotion, and opinion." Shore, who had photographed Andy Warhol in The Factory, was also influenced by Warhol's fascination with the banal and the popular––making art out of the things, or the scenes, that other people regarded as non-art. 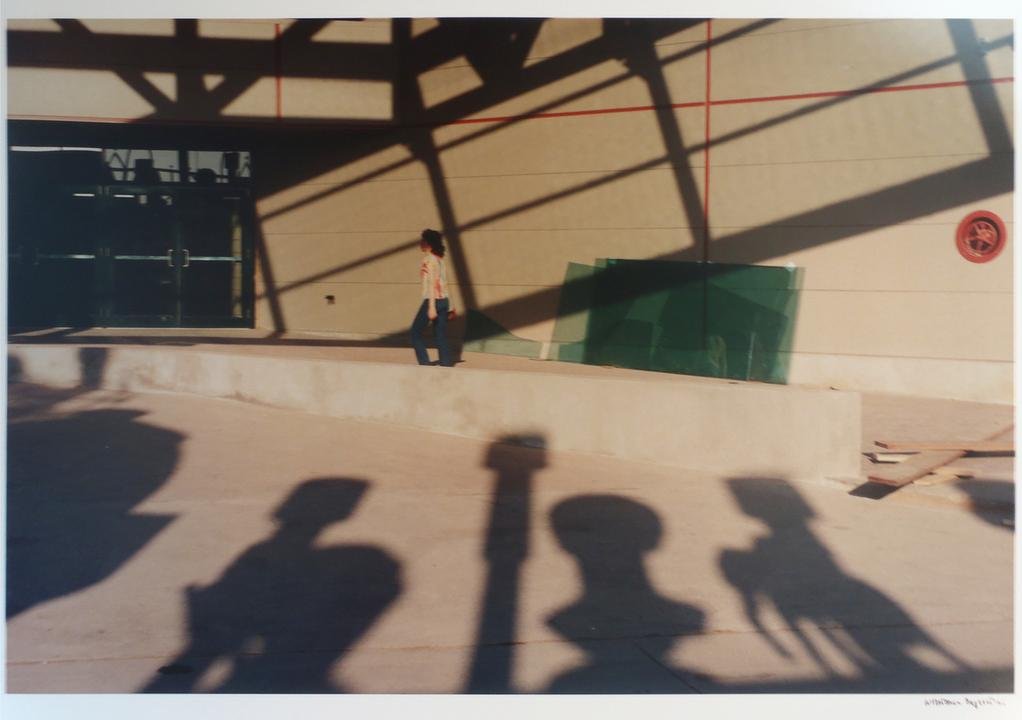 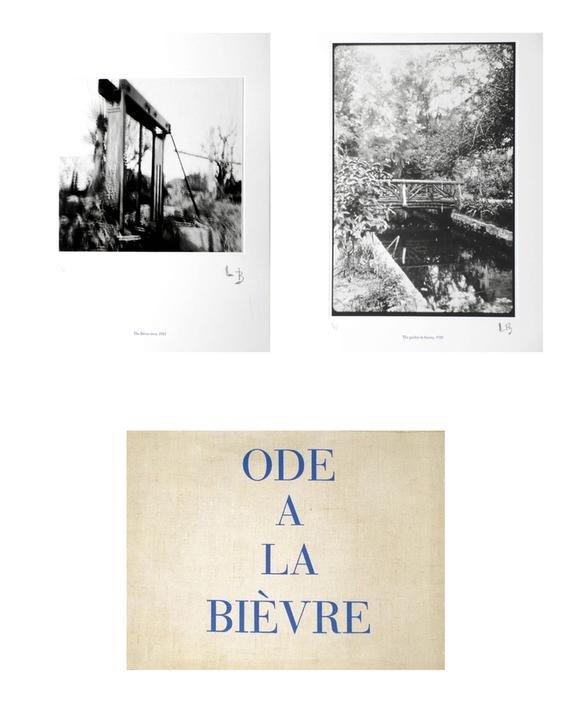 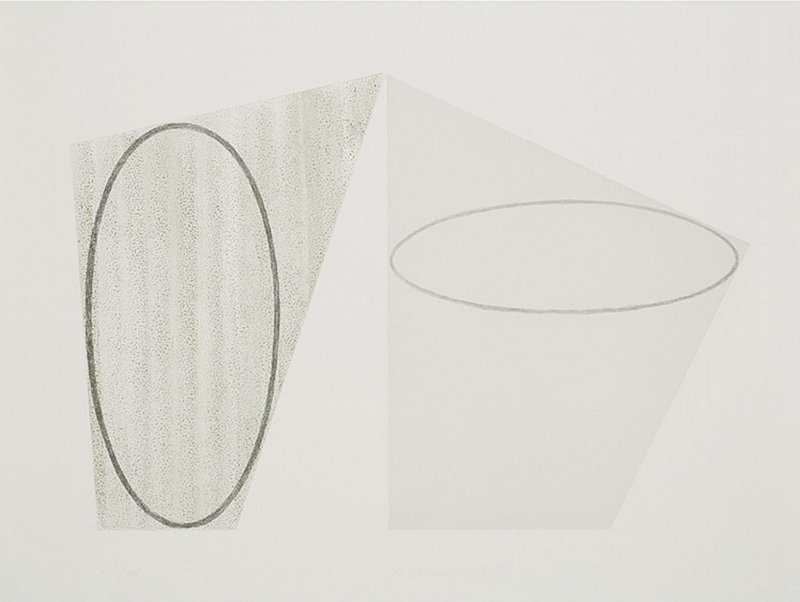 ALLEGIANCE, FROM "WOMEN OF ALLAH"Shirin Neshat1994 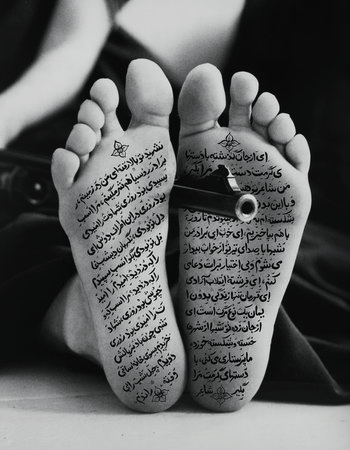 When Iran's Islamic revolution took place in 1979, Shirin Neshat (b. 1957) was studying in the USA. She was not able to return to her homeland until 1990, by which time Iran had altered beyond all recognition, both ideologically and culturally. Haunted by her experience of the new Islamic Republic, Neshat's first works were her way of rediscovering and reconnecting with Iran. Allegiance with Wakefulness (photographed by Cynthia Preston) is part of a series of black-and-white photographs called "Women of Allah," about the experience of Iranian women who were prepared to sacrifice their freedom and their lives for their religion. Each image presents a veiled woman with a weapon. Though Neshat poses as these militant "Women of Allah," she explains that the works are not about herself or her opinions. She gives each woman she portrays a voice by writing on the photographs, covering the exposed parts of their body––face, hands, and feet––in calligraphy. The script in Allegiance with Wakefulness is from a poem by Tahereh Saffarzadeh, a prominent Iranian writer and academic who describes herself as a "true fundamentalist," a staunch supporter of the Islamic Revolution. Addressed to the male martyr, the lines appear like celebratory henna tattoos, yet they cover the soles of the feet, which are considered unclean and therefore offensive. RELATED ARTICLE:Q&A: Exiled Iranian Feminist Shirin Neshat

A SUDDEN GUST OF WINDJeff Wall1993 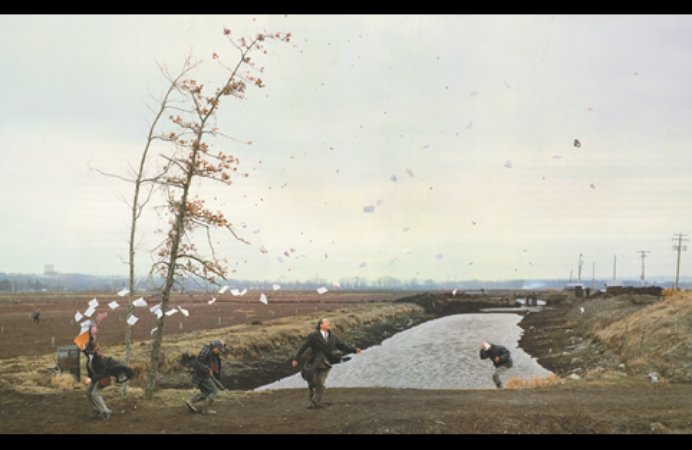 A Sudden Gust of Wind (after Hokusai), by the Canadian photographer Jeff Wall (b. 1946), is based on a 19th-century woodblock print by the Japanese artist Katsushika Hokusai, in which a group of travellers loses a stack of papers to the wind. Wall's tableau uses the same composition but sets the group of figures in a modern, post-industrialist landscape. The cinematic quality of the work is indicative of Wall's tendency to construct images resembling film stills. His entire process is, in fact, informed by filmmaking: this can be documentary in style, when the work doesn't involve some form of collaboration, or "cinematographic," as in this case, when he hires actors, scouts locations and creates digital special effects. Although the photograph appears to be a snapshot capturing a moment in time, in actuality Wall spent months composing and perfecting its elements and details with digital photographic tools. Wall first began producing his light box-mounted photographs after returning to Vancouver from a three-year period of study at the Courtauld Institute in London. Wall was the first artist to use this method, and the effect produced resembles a cinema or television screen, enhancing the unreality of the scene. His research degree in art history provided a basis for his exploration of contemporary life through art historical references. A Sudden Gust of Wind (after Hokusai)challenges the documentary nature of photography, a characteristic associated with the medium since its inception. 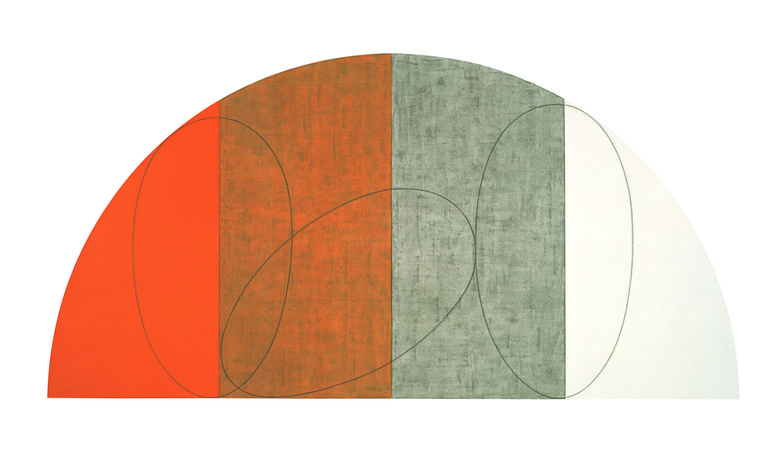 The subtle, abstract paintings of Robert Mangold (b. 1937) are most closely associated with Minimalism, although his work draws on influences as wide-ranging as early Classical pottery from Greece, Renaissance frescos and Abstract Expressionism. Mangold's images, composed of reductive elements and showing a complete lack of depth and perspective, represent nothing more than their parts. It is the complex relationship between these that is key. The Curved Plane/Figure series of 1994-1995 is a group of semi-circular paintings inspired by a sixteenth-century Jacopo Pontormo drawing in a lunette. Curved Plane/Figure XI is divided into four panels of color, over which the artist has drawn three pencil ellipses. The brown of the second panel from the left combines the two colors on either side: the orange has been painted over the grey. The white segment on the right (the ground for the grey and orange) breaks the symmetry of the triad while completing the configuration of the lunette. The curiously harmonious combination of mismatched shapes is one of the most striking elements of Mangold's outlook. Although the shape of the painting is, in Mangold's words, "the first element," he was also greatly inspired by color-field painting, in particular the work of Mark Rothko, and Barnett Newman's Onement VI. The mottled effect of the second segment mirrors Newman's subtle handling of the paint and contrasts with the formal, linear qualities of the work.
GREENWOOD, MISSISSIPPIWilliam Eggleston1973 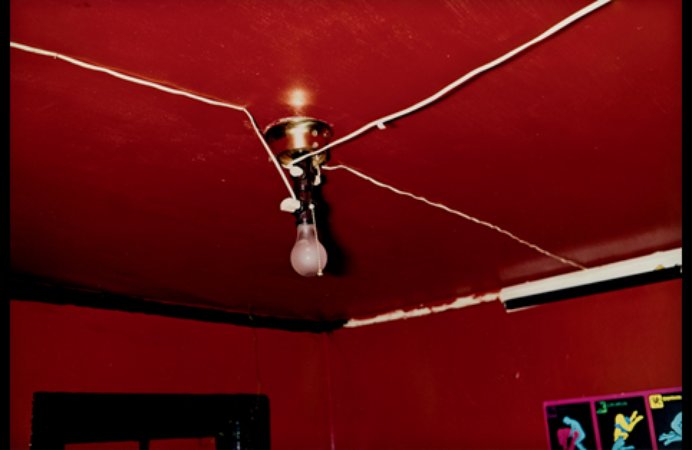 From the ceiling of a red room hangs a light bulb, white cables spread outwards towards the walls. Eggleston considers this photograph to be one of his most difficult and powerful works. The subject could hardly be more mundane. Yet there is a painting-like quality to the composition, reminiscent of a canvas by Henri Matisse or Barnett Newman. Although he was inspired early in his career by the black-and-white photographs  of Robert Frank and Henri Cartier-Bresson, in the mid-1960s Eggleston started to experiment with color photography. An important development came with his adoption of dye-transfer printing––a technique that had been predominantly used in commercial design. This enabled him to produce prints with an intense saturation of color. Often discovering an aesthetic value in the banal and the commonplace, Eggleston's images have enabled him to establish color photography as a recognized fine art medium.
MIRROR CHECKJoan Jonas1970 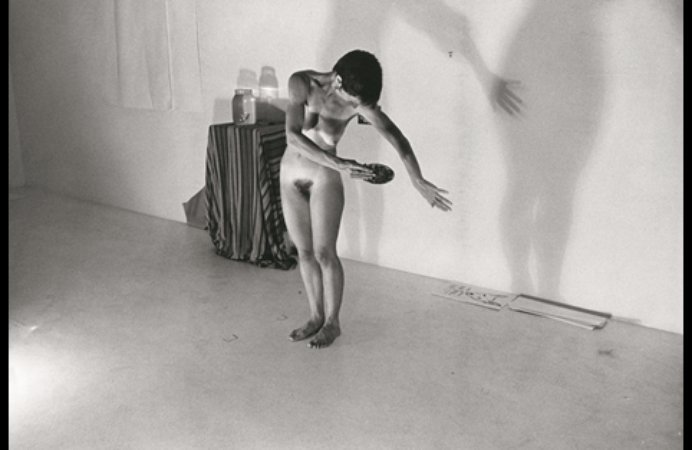 First performed by the artist in 1970, Mirror Check involves a naked woman holding a small mirror and slowly moving her hand so that she observes her whole body, but only in small sections over the duration of the action. Leading on from previous performances in which choreographed participants moved with full-length mirrors that reflected themselves, the surrounding space and the audience, Jonas (b. 1936) sought to further complicate the relationship between viewer and subject. Here, only the artist can see what is reflected in the mirror, and the act of standing unclothed in public, without engaging the audience in eye contact, forces the gaze of the viewer to become voyeuristic. The work explores the idea that while women's bodies are frequently subjected to observation and judgement, self-scrutiny is also a powerful aspect of the female experience. The work has subsequently been performed with other women taking the central role, and while all are given the same instructions, performers' styles are subtly influenced and affected by how they feel about their own bodies. The external context for the work has also changed considerably over forty-five years, so that nudity and the sight of a woman examining her own body are less confrontational than when the work was first presented. 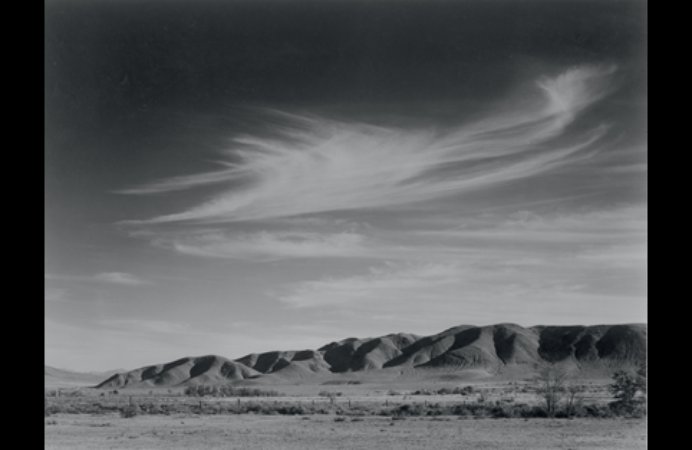 In 1943 Ansel Adams visited the interment camp for Americans of Japanese descent in Manzanar, California. Mostly he documented its residents and their daily life there, but he also photographed the desolate landscape of the central California site. The most popular photographer in America, Adams was sometimes criticized for his "inhumane" work, in which people with their messy suffering and joy, have no place. His Manzanar photographs refute that accusation––in addition to his portraits of internees and documentation of camp activities, his empty landscapes reveal a subtext of human injustice and despair. A key achievement of Adam's work was to reconcile landscape photography with twentieth-century Modernism. Capturing a transient moment in a chaotic world of light and shadow, he produced images that are almost abstract in their graphic boldness, blending deep emotion with rigorous artistic discipline and technical precision.