Is That Banksy Worth More Now That It’s Shredded? 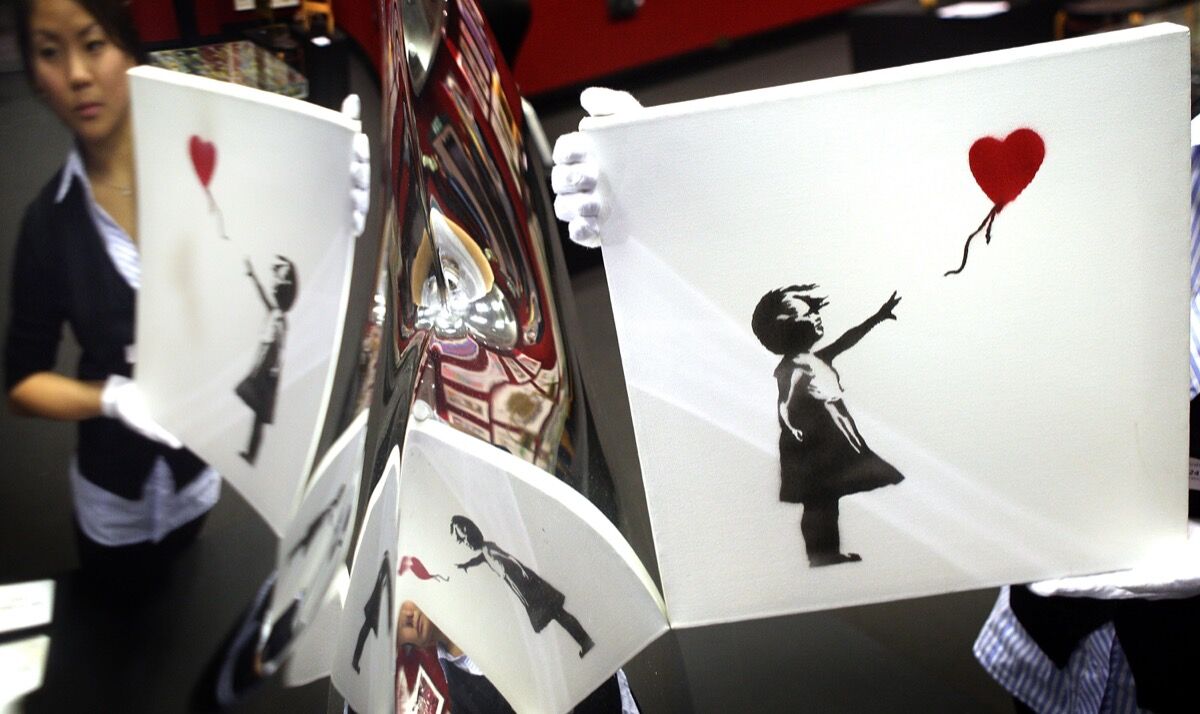 Photo by Peter Macdiarmid/Getty Images.
On Friday night at Sotheby’s New Bond Street salesroom in London, auctioneer Oliver Barker opened bidding on
Banksy
’s Girl With Balloon(2006) at £100,000. Clients on the phone pushed it beyond the high estimate of £300,000. It hammered at £860,000, or slightly over £1 million with fees. Seconds later, the small canvas with a blood-red balloon slid through a shredder the artist had secretly installed in the frame, emerging in strips. A video that Banksy posted to his Instagram account has been viewed more than 10 million times in a matter of days.
Was this a brazen act of sabotage or a clever stunt that may add millions to the work’s value if it were to go back on the market? Given the fact that the work is seriously damaged, it’s perhaps no surprise that opinions were mixed.
“One could argue that the work is now more valuable,” Sotheby’s Alex Branczik said after the sale. As the thinking went, if the Banksy series was already well-known—the original stencil topped a 2017 poll of the best-loved work of British art—an event that Sotheby’s called in a release an “unexpected incident” and “instant art world history” would only make the work more valuable.
Sotheby’s wouldn’t comment further, apart from insisting its top brass had no prior knowledge of the stunt—a stance that is becoming less believable according to commentators, who point to the logistics of installing a shredder in a frame. There’s a low probability such a device could get past Sotheby’s inspectors.
Still, Steve Lazarides, the dealer credited with launching Banksy’s market in the 2000s after first meeting him in the 1990s, said he believes that Sotheby’s had nothing to do with the shredding. It was an act perpetrated solely by Banksy as an extension of his long history of punking the powers that be with his art, he said. As a result, he reasons, Girl With Balloon is more valuable because it will retain its original value, while gaining the patina of a performative act now known around the world.
“It may well be one of the first works to be worth more destroyed than it is whole,” Lazarides said. “If I was the collector that paid the money, on the night I would have been very shocked, but looking back in hindsight right now, I think I’d keep that piece of work. Its value very well might have increased.”
When asked about how the buyer could sell the work, Lazarides said there would be a host of potential buyers.
“If I were an avid Banksy collector, wouldn’t I want the most famous piece of art he’s ever made, even if it’s shredded in a box?” he said.
On Saturday, Joey Syer, co-founder of the London-based online art marketplace MyArtBroker.com, told The Guardian that the the stunt was legitimate and will only push the artist’s prices higher. As for Girl With Balloon—which has not been seen since it was whisked away by Sotheby’s art handlers seconds after the destruction occurred—Syer thinks its value can only increase in its current state.
“Given the media attention this stunt has received, the lucky buyer would see a great return,” he told The Guardian, estimating the increased value at at least 50 percent higher, potentially even as much as £2 million or more. “This is now part of art history in its shredded state.”
Stephan Keszler, an art dealer who has sold more than two dozen large Banksy works over the last few years, disagreed. Keszler argued that the deep-pocketed Banksy collectors he counts as clients are more interested in acquiring the graffiti pieces that first appeared as guerilla tags on buildings, rather than works on canvas such as Girl With Balloon. He thinks the $1 million price is already an inflated figure—“a very, very, very high price,” as he put it.
“This work should have sold for £200,000—if he hadn’t shredded it no one would be talking about it,” said Keszler, who has sold Banksy art that appeared on buildings for as much as $1.2 million. “Now they’re saying it’s going to be $2 [million] or $3 [million] or $4 million, which is totally crazy.”
Even with the added performative element of the work, Keszler thinks true Banksy collectors aren’t clamoring to buy it.
“It’s such a famous work right now, because it’s unique,” Keszler said. “On the other hand, I think the majority of the clients I have, they would say, ‘We don’t play this game.’ If you buy it for $2 million right now—you look like a fool if you buy a piece shredded coming out of the frame.’”
All said that the work’s shift in value in its shredded form is predicated on the idea that this truly was an independent act, which Sotheby’s knew nothing about. The critic Jerry Saltz was an initial believer, who wrote on Sunday that “I’m not a Banksy fan but this made [me] want to dance barefoot with him.” By Tuesday, he had changed his tune: “Good morning Sotheby’s: Did you enjoy doing your little Banksy dance? Con?” he wrote. Suzanne Gyorgy, the head of Citi Private Bank’s art advisory and finance division, explained to a wealth management publication that simple due diligence from an advisory firm retained by a potential buyer would have uncovered any irregularities in the frame.
Still, Lazarides thinks that the auction house was unaware of the stunt. He called it “one of the finest pieces of performance art to ever have been pulled off.”
“I worked for him for 12 years,” Lazarides said. “The idea of him colluding with an institution to pull off a stunt is the complete antithesis to his philosophy.”
Nate Freeman is Artsy’s Senior Reporter.
Cover image: Screenshot from @banksy’s video, via Instagram.