Time to Put the Garden to Bed? 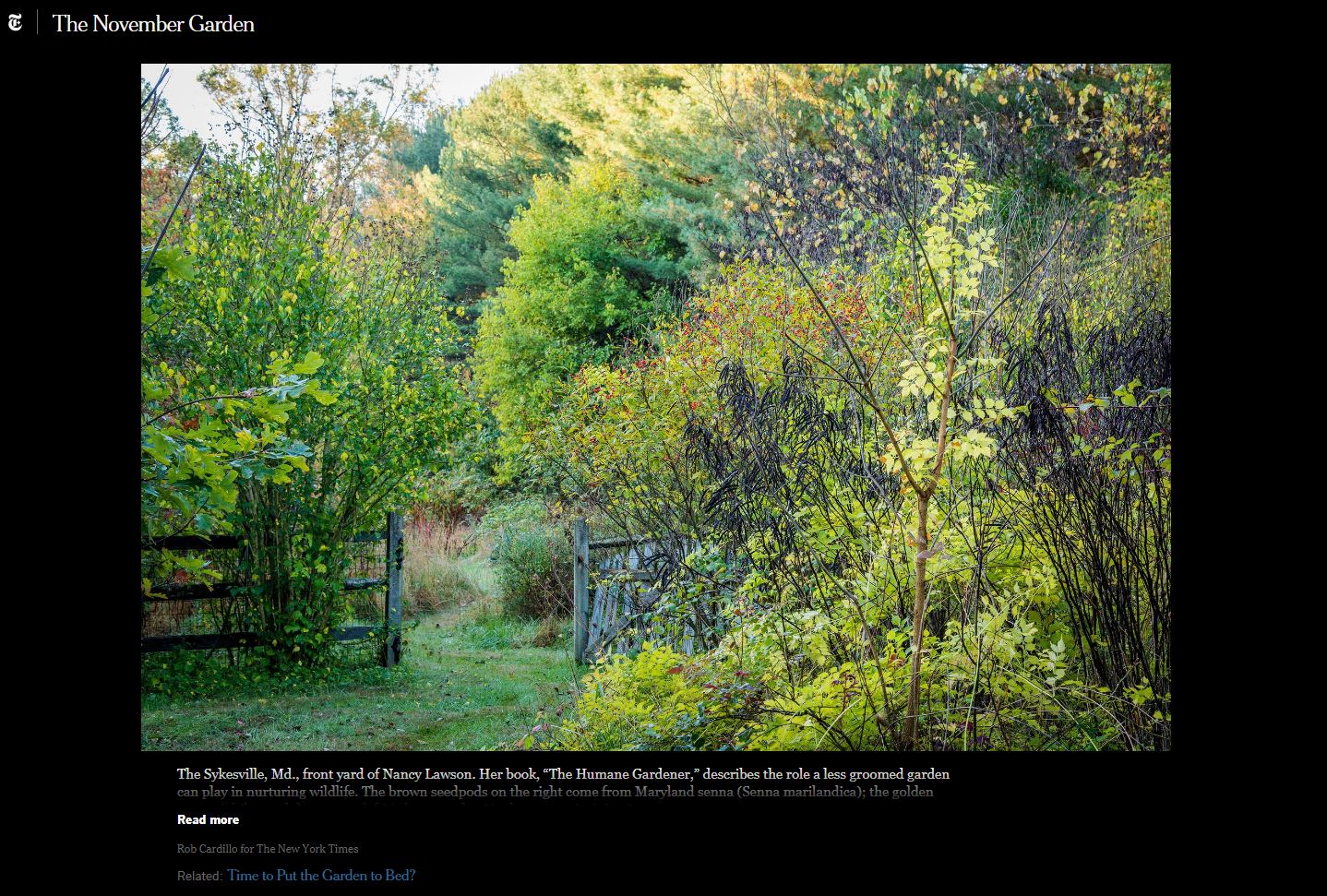 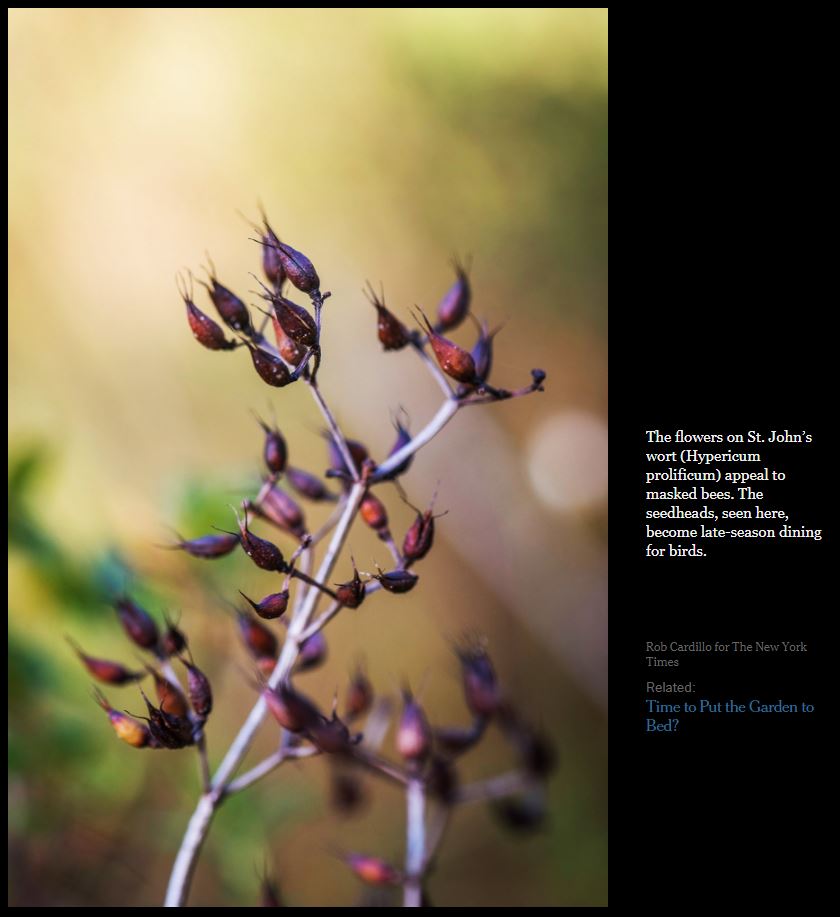 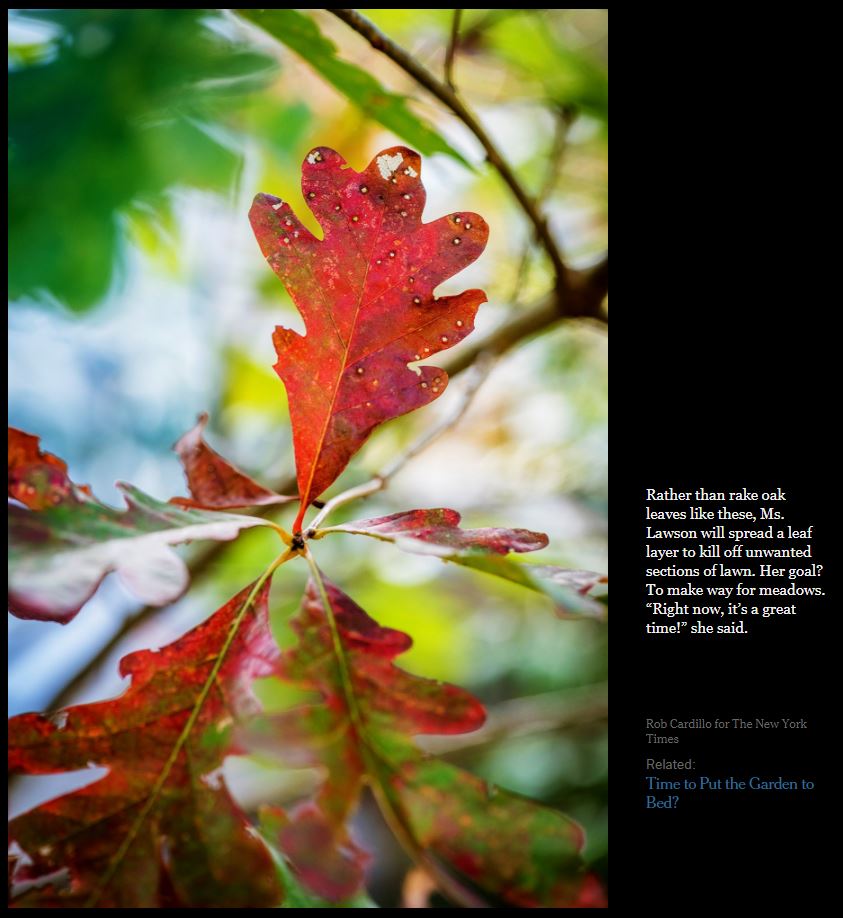 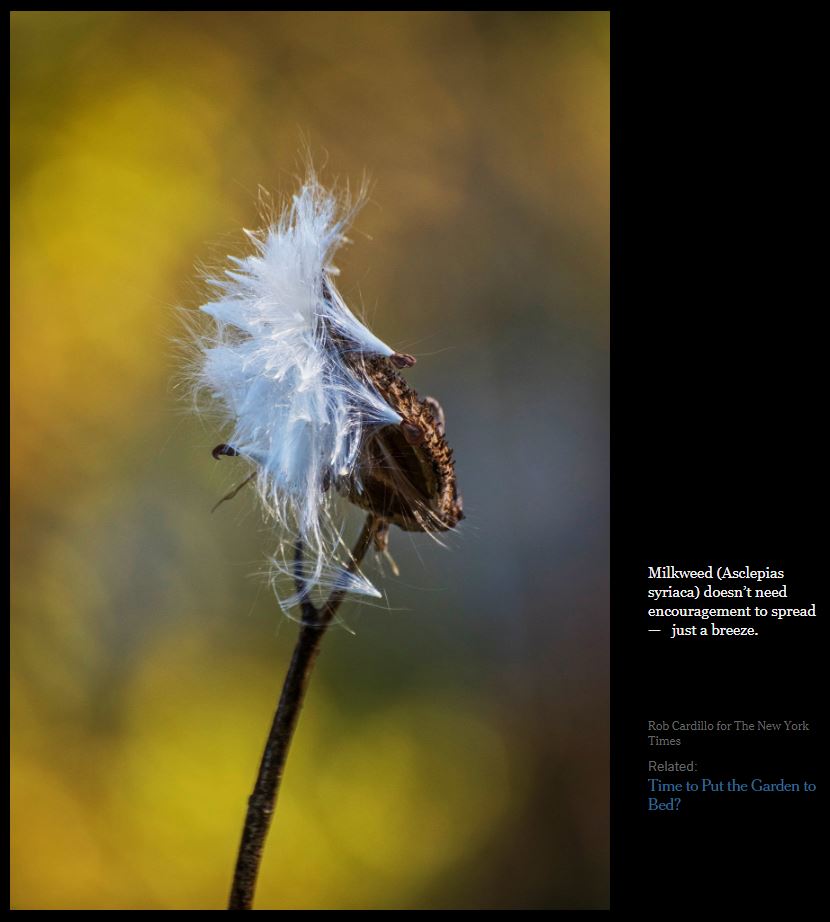 There are 422 living trees for every human on Earth — 3.04 trillion overall — and during a couple of weeks each fall, a person can feel plainly outnumbered. Is it possible that a trillion of those trees have deposited their leaves in the front yard? And why are so many of them still green?
That global tree census comes from a 2015 study in the journal Nature. And reading its methodology in full — biome-level validation estimates! predictive regression models! — would be a perfectly good way to put off the job of going out to the garage, grabbing a rake and getting to work on a few of those leaves.
Gardening in November: Why bother? And haven’t we already missed our chance? In 2016, the first freeze sauntered into New York on Dec. 9. This year, it crashed the harvest festival a full month earlier. And 2018 — so we’re assuming the Earth will continue spinning on its axis? We’re a nation of gamblers.
The garden tool to battle indeterminacy, however, turns out to be routine. Were you to call a half-dozen super-gardeners around the metro area and ask for their fall cleanup regime, you’d come away with an authoritative to-do list.
What seems at first like an undifferentiated pile of drudgery can, in fact, be divided into three categories: tasks that need doing for the health and hygiene of the garden; tasks that could be done to tidy up the place; and tasks that a more organized, more ambitious and generally better person would do to create a thriving garden next spring. 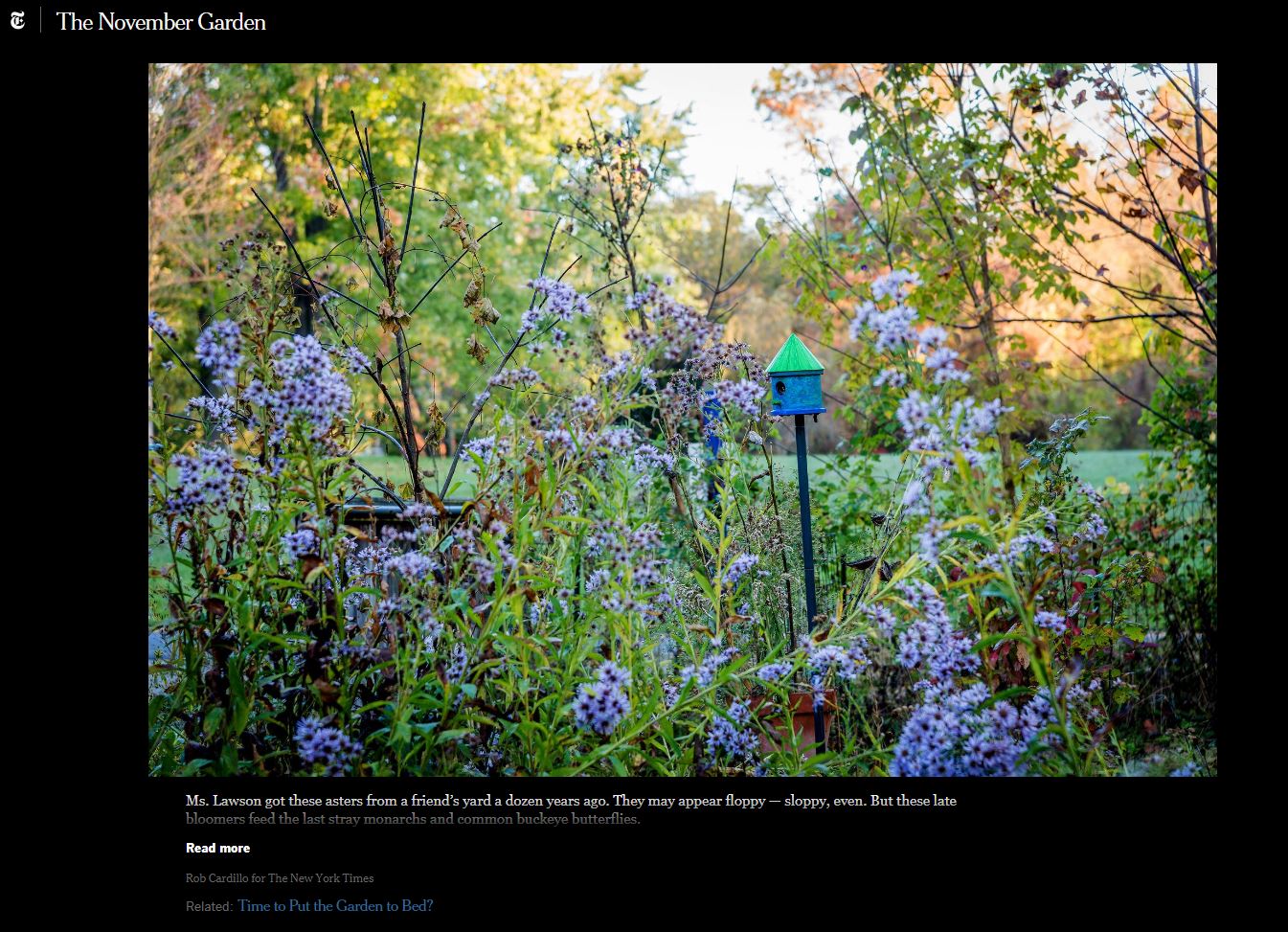 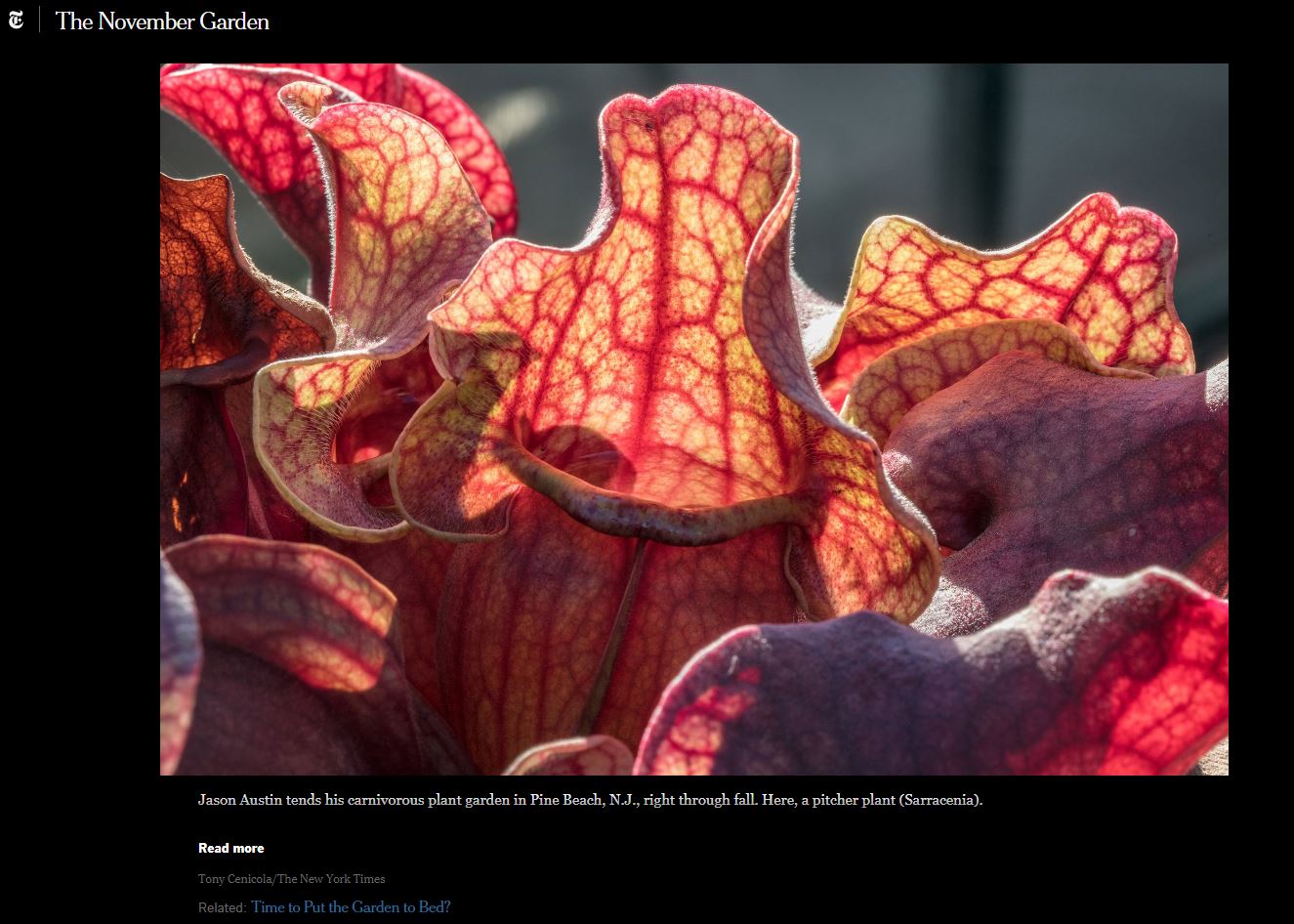 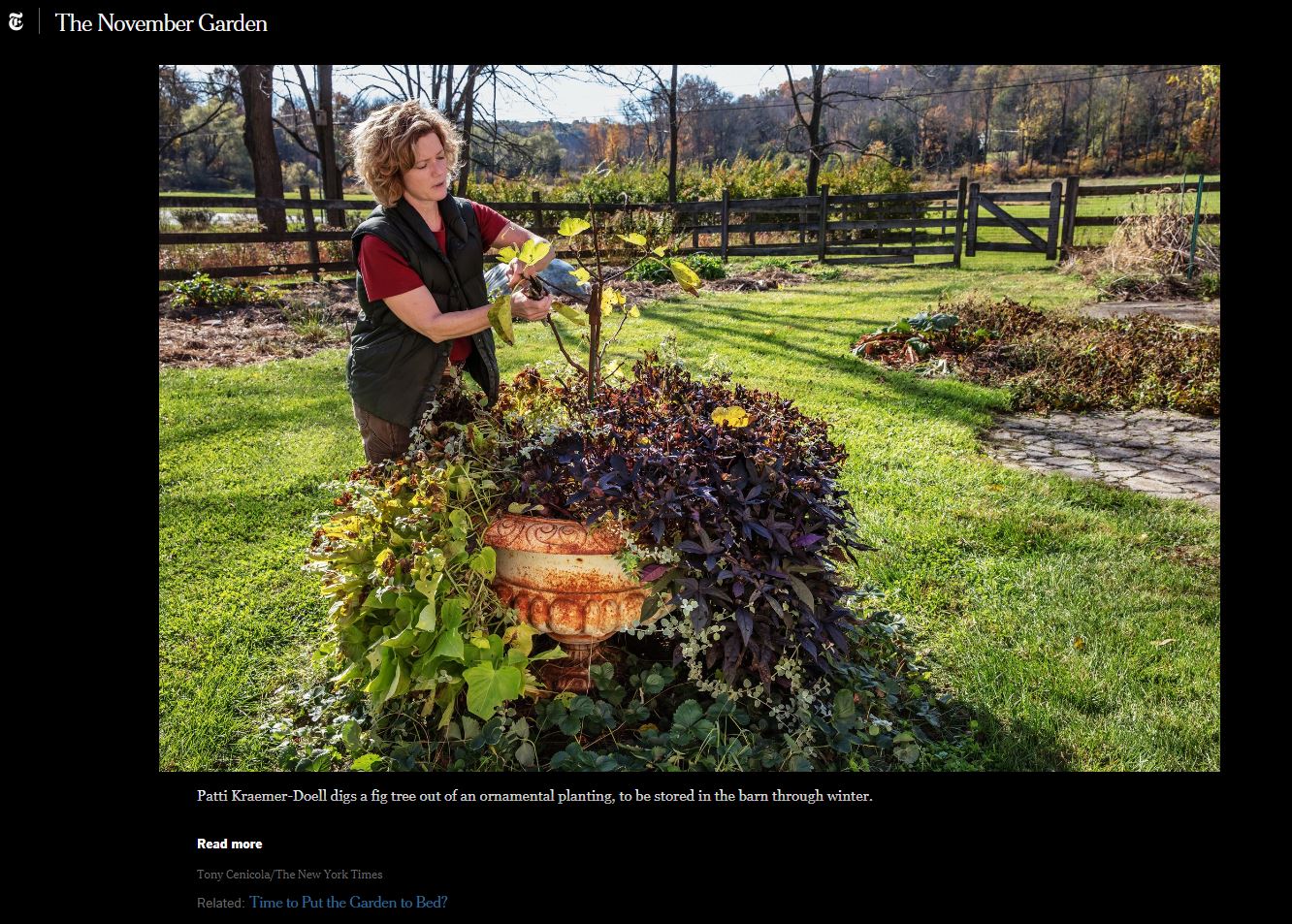 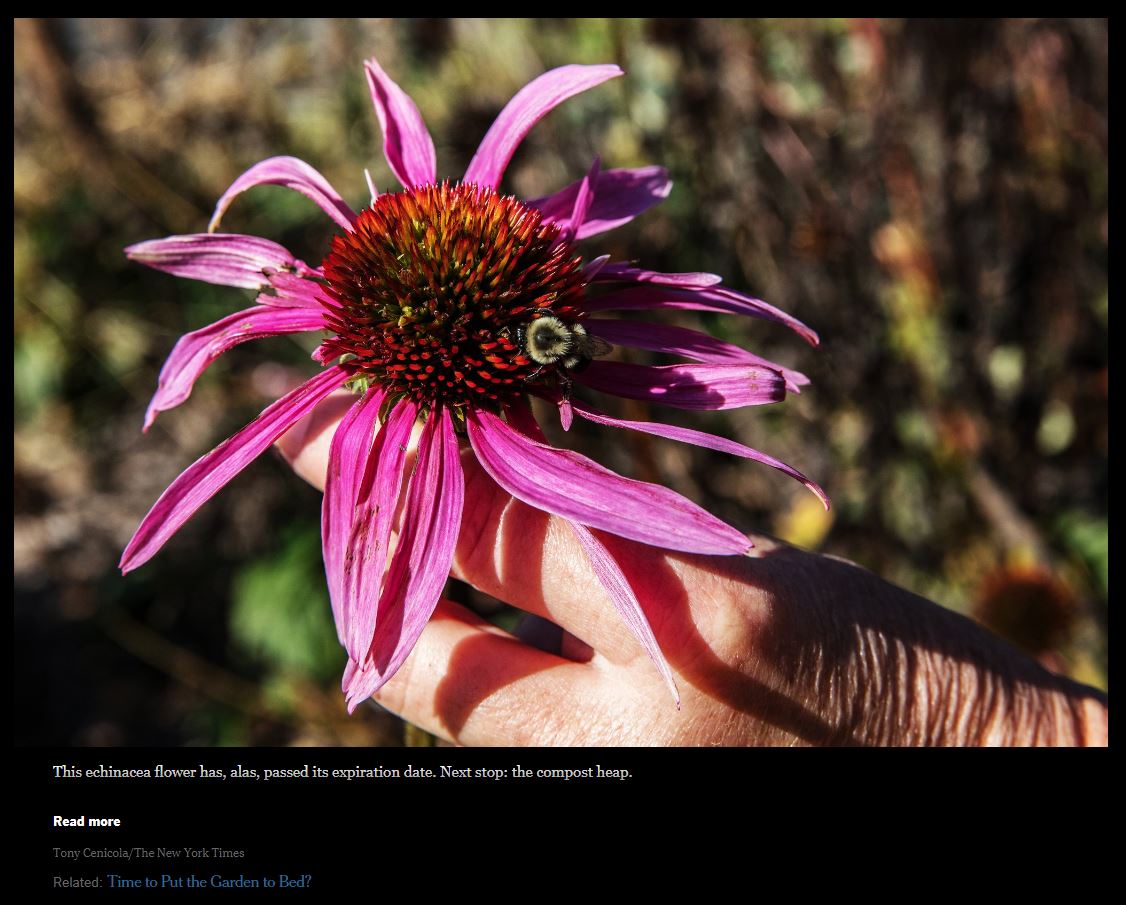 But wait, there’s a fourth category, the refuge of idlers — and also, as it happens, backyard ecologists. We’ll save that option for the end.
Life and limb: Let’s start there. Annie Novak, 34, who raises produce at Eagle Street Rooftop Farm, in Greenpoint, Brooklyn, has a cautionary message for the patio and balcony gardeners of New York: “It’s a hazard to have a lightweight container system on your roof.”
Once you pull the tomato vines out of a planter and stop watering, what remains on the roof is a projectile. “If you can lift something up,” Ms. Novak warned, “so can the wind.”
Keeping the growing material in place is the next concern, and this applies to any container planting. Ms. Novak’s main crops — calendula and chili peppers — start to flag each fall after temperatures drop below 40 degrees. Before then, she will have started to sow cover crops, like clover and vetch, to hold onto the growing medium, a specialized mix of particulate clay and shale, mixed with organic matter. A cover crop will also help fix nitrogen — that is, feed the soil for spring planting.
Look up. Once the leaves have base-jumped off their branches, you can start to see the dead limbs they were concealing. Urban forestry researchers estimate that an ice storm can multiply the weight of a tree limb by a factor of 10 to 100. And the canopies on some common tree species — hackberries, willows, Bradford pears, jack pines — may render them more vulnerable to limb loss.
The takeaway: Fall represents an unimpeachable time to make an appointment with an arborist and a pruning crew.
RUST NEVER SLEEPS
Splitting, cracking, rotting, rusting. If winter kept its own chore list, various forms of decay would represent items one through four.
Shobha Vanchiswar performs yeoman’s work to limit the damage from freezing and melting in the quarter-acre of gardens surrounding her 1915 colonial in Chappaqua, N.Y. Well before the meteorologists start hyperventilating about first frost, she evacuates her tender potted perennials to a small greenhouse. A few bay standards, some boxwoods, a Meyer lemon, a hibiscus — squeezing them all in there generally takes a little pruning first.
Once the plants are safe, Ms. Vanchiswar rescues the tools. Empty terra-cotta pots get a pressure wash and an escort to the garage. Trowels and spades she dunks in a bucket of sand, with a little motor oil mixed in for lubrication. (Isn’t that the central contradiction of winter: How can it simultaneously be so damp and so dry?)
Ms. Vanchiswar began her career in molecular biology, and she addresses the garden in fall with a scientific rigor and exactitude. The way to get rid of weeds in the lawn? Deposit three inches of compost in October and November and reseed the turf. How to preserve the climbing roses? Wrap them in a single layer of burlap.
But late fall also allows Ms. Vanchiswar to indulge her later career as a garden designer and artist. “In winter,” she said, “it’s more about the architecture and the light effects in the garden.” Some of her cut perennials — joe-pye weed, golden rod, sedums, asters — go into bundles that she brings to a watercolor class at the Art Students League of New York.
“All winter long it will be in the still-life arrangement,” Ms. Vanchiswar said of her cuttings. The fall garden here becomes not a chore but an opportunity: If you can’t grow it, paint it.
SPRING IS ONLY 120 DAYS AWAY
The New York garden will, inexorably, die back over the winter. (Aspiring year-round gardeners may want to look at property in the temperate outer borough known as Florida.) When you’re cleaning up the yard in fall, you’re betting on next spring.
Patti Kraemer-Doell, 49, spends the fall shutting down both her home garden and her floral events business and CSA, called Little Big Farm, in the northwest corner of New Jersey. That means digging up hundreds of dahlia tubers to store in a 40-degree fridge and then replant next May.
Annuals? Ms. Kraemer-Doell yanks them out of the ground for the compost heap: ageratum, gomphrena (that is, globe amaranth), zinnias, sunflowers.
Perennials? These she divides with a sharp spade: ornamental grasses, sedum, rudbeckia, echinacea. On a leisurely day, you can wet down the plant, lop off the dead stalks a few inches above the ground and then dig up the whole root ball. Pull apart the tangled roots with a garden fork. (Just imagine your kindergartner has come home with bubble gum in her hair.) Next, return part of the perennial clump to its home, while spreading the satellites to new sites. If it’s chilly out, and you’ve got a mild case of consumption, cleave a hunk of root, toss it in a new hole and give your new pal a drink. It’s quitting time for both of you.
These perennials are tougher than you would think, Ms. Kraemer-Doell said. And fall is, counterintuitively, a good time for plant shopping. If the ground isn’t frozen yet, what do you have to lose?
“If you go to Lowe’s and Home Depot, and it’s a buck and it’s still alive?” she said. “I’ll buy that.”
Baptisia, roses — why not? Chop up your leaves with a mower and blow them over the beds for insulation. Think of it not as a blowing mess, but as a mobile compost pile. Will the plants bloom next summer? Is it possible in winter to have too many things to look forward to?

Every week, get updates on residential real estate news, covering the five boroughs and beyond.
Here’s a plant that definitely won’t flower: the hydrangea that someone prunes a little too punitively in the fall. Jason Austin, a gardener and horticulturist in Pine Beach, N.J., wishes more of us would think about our goals before wielding a set of pruners or loppers. But dead twigs, branches that cross each other close to the trunk (picture how your arms would appear if you turned a steering wheel without letting go): Not a good look for a tree. Go to town on this stuff.
Still, this is not a license to treat your woody charges like a patient on the amputation table in “The Knick.” “People have to recognize,” Mr. Austin said, “you’re pruning branches that could be holding next year’s flowers.”
WE’RE NOT BEING SLOVENLY; WE’RE PRESERVING A MOTH HABITAT
What if you did nothing at all? Call it the Sloth Option. As Carol Capobianco, the director of the Native Plant Center at Westchester Community College, in Valhalla, N.Y., explained in an email, “We encourage people not to put their garden to bed in winter.” The circle of life doesn’t work as well with a winter-shaped wedge cut out of it.
In her book, “The Humane Gardener” (published by Princeton Architectural Press in April), Nancy Lawson promotes gardening to create habitat for wildlife. That means leaving the seed heads flopping on meadow plants like boneset, joe-pye weed, ironweed and woodland sunflowers. The messy area below these plants will become shelter to wood frogs that overwinter in place. Swallowtails will camp out in the dry stalks.
“A few years ago, I set out to figure out what I like about winter,” Ms. Lawson said. “And to try to force myself to be at peace with the cold and the brown. I realized it’s so life-giving to other species. They have to be outside all the time. I get to be inside under a blanket by the fireplace.”
By the end of October, for instance, queen bumblebees have burrowed into the leaf litter to ride out the winter. “In spring, they’re the only ones left of their colony,” Ms. Lawson said. “And they start a new colony by themselves.”
Doesn’t she worry that a blanket of unraked leaves will smother the lawn? No, she counts on it.
“Right now, it’s a great time!” she said of her ongoing campaign to exterminate the lawn. For more than a decade, Ms. Lawson has been trying to spread a wild meadow to replace the turf grass that originally encircled her 1970s home outside Baltimore, Md. This year’s green leaves may help: In some scientific studies, the moister, green ones appeared to decompose faster than the dryer, brown ones.
Love your lawn? Move the leaves to an inconspicuous corner of the yard and forget about them for a good long while. When you remember the mountain again — and you can actually feel the sun on your face — spread the stuff around the flower beds.
“Leaf mold” — alleged scourge of the unraked yard — ought to hire one of those reputation consultants. When the leaves are wet, Ms. Lawson said, “they’re not going to blow away.” Stacked over newspaper and cardboard, the leaf litter will decay into rich soil for spring. It’s not leaves now, but mulch.
“It might look a little like death,” she said, “but it smells like life.”
As a garden designer, Ms. Lawson can finally stop thinking about the composition of plant colors, textures and heights. It’s fall: time to let decomposition take over.
Continue reading the main story

I agree with the other readers commenting here - bring back the gardening section
This article is art, but not help. It mentions but does not really give instruction concerning things to do.
I miss Ann Raver as well. Her excellent City Gardener's Handbook got me started twenty years ago. Her attitude was do garden on balconies...
Posted by Cabecilha at 4:10:00 PM