Hearing Begins for First Cultural Destruction Trial at the Hague

Destroyed Timbuktu manuscripts
In a hearing that begins today, jihadi leader Ahmad al-Faqi al-Mahdi will be facing charges in the Hague that he destroyed nine mausoleums as well as the fifteenth-century Sidi Yahia mosque in Timbuktu, according to the Art Newspaper’s Anny Shaw. It’s the first time anyone will be facing war crime charges for cultural heritage destruction. His acts also apparently included the destruction of Sufi shrines and tombs. The buildings he destroyed were part of the “city of 333 saints,” in the words of UNESCO.
Al-Faqi was reportedly associated with Ansar Dine, an Islamist group, as well as an anti-vice squad, Hesbah, which enacted sharia law in Timbuktu.
UNESCO has been reconstructing Timbuktu’s mausoleums in the intervening years. If the hearing determines there is enough evidence, the case will move on to a full trial. 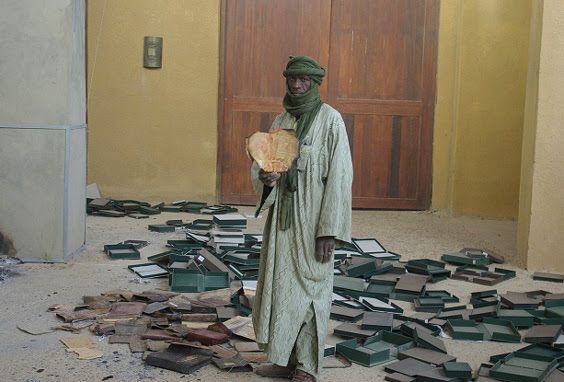