Six of Cinema’s Most Unforgettable 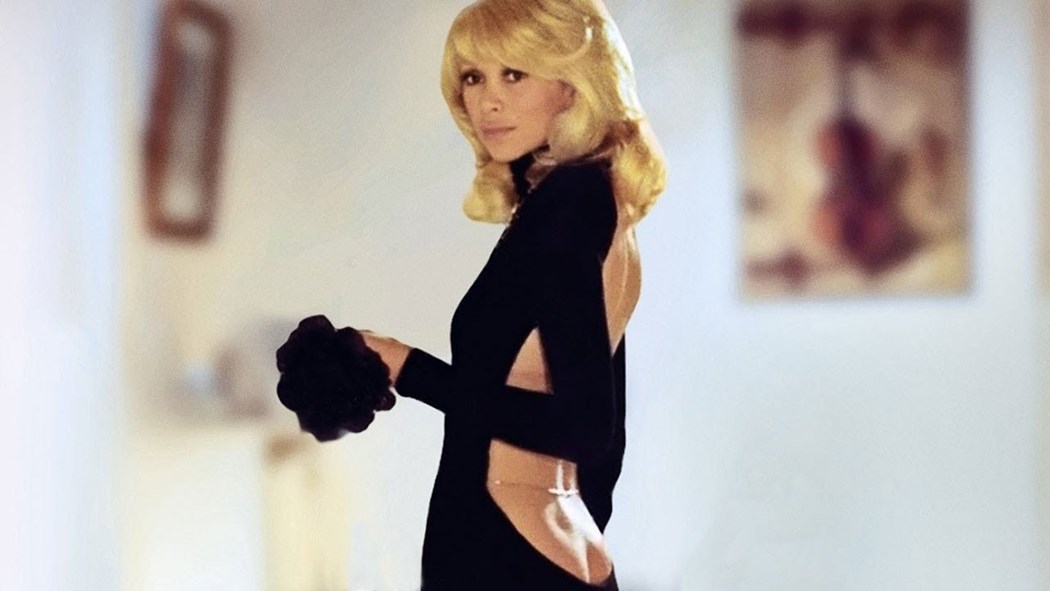 In memory of Mireille Darc, best known for wearing one of the most risqué black dresses in cinematic history, we examine the LBD's starring role on screen

Prior to 1926, black was a shade reserved for mourning attire alone. Yet, in 1927, the silent romantic comedy It, and its star Clara Bow, gave the little black dress an on-screen debut, transforming the sombre garment into an erotically charged sartorial statement worn by women the world over. The film turned Bow into a major Hollywood icon (and, arguably, America’s first sex symbol) while the black dress became an emblem of provocation in itself. It has played a multifacted role in cinema ever since.Last month one of its greatest purveyors, French actress Mireille Darc, passed away at the age of 79. Known for her shock of bleach blonde hair, Darc was nicknamed “the grasshopper” for her famously long legs. The high-neck, black velvet dress that she wore in Yves Robert’s 1972 The Tall Blond Man With One Black Shoe (Le Grand Blond avec une chaussure noire) was designed by Guy Laroche, its towering floor-length shape highlighting her statuesque frame. This garment has since become one of the most renowned in cinematic history for its cut-out back, which revealed a risqué hint of Darc’s intergluteal cleft. In celebration of her, we chronicle the sexiest LBD moments in film.

The 1972 French comedy chronicles the trials and tribulations of François Perrin, a hapless musician masquerading as a spy. Mireille Darc plays Christine, the film’s femme fatale, and top agent in France’s Counter-Espionage department. During the scene in which the famous Guy Laroche-designed gown makes its appearance, Christine greets François at the door in what appears to be a rather demure ensemble. Upon turning around, he is startled to realise that the dress is, infact, entirely backless, to the extent that her buttock clevage is visible – a pre-cursor to the Alexander McQueen bumster if ever there was one. The dress is now housed in the Musée des Arts Décoratifs in Paris, and remains one of the most iconic LBDs in cinematic history.

The strapless satin dress that Rita Hayworth’s Gilda wears in the 1946 film of the same name, during her striptease rendition of Put the Blame on Mame, was created by costume designer Jean Louis to accentuate the starlet’s voluptuous figure (she had only just given birth to her daughter Rebecca, fathered by Orson Welles). Louis said of his design: “It was the most famous dress I ever made. Everybody wonders how that dress can stay on her while she sings and dances... well, inside there was a harness like you put on a horse. We put grosgrain under the bust with darts and three stays, one in the centre, two on the sides. Then we moulded plastic softened over a gas flame and shaped around the top of the dress. No matter how she moved, the dress did not fall down.” In reality, Hayworth was a shy introvert, yet Gilda rendered the actress a pin-up poster girl. Later in during her career she would famously state: “Men go to bed with Gilda, but wake up with me.”

In Boomerang, Grace Jones was cast as Helen Strangé in a parody of the singer herself. Director Reginald Hudlin said of Jones’ work ethic that “she was always 100% committed, and would do the absolute craziest thing at any given time. She was absolutely perfect for the role. It was written for her, and she came in very humble, very sweet.” Murphy portrays Marcus Graham, a chauvinistic advertising executive who meets his match when Strangé propositions him over the table at dinner. Wearing an off-the-shoulder black dress and collarbone skimming earrings, a headscarf-clad Jones gets straight to the point by asking “so... when are we gonna fuck?”

Inspired by Bobby Vinton’s 60s ballad Blue Velvet, David Lynch directed his 1983 neo-noir as a highly personal project, exploring themes of sex, violence and the subconcious through the auteur’s unique brand of surrealism. Kyle MacLachlan plays college student Jeffrey Beaumont, who endeavours to solve the mystery of a severed ear discovered amongst the white picket fences of his all-American hometown. During his search for answers, he encounters nightclub singer Dorothy Valens (Isabella Rossellini), an unsubtly Freudian character tapping into Beaumont’s oedipal desires. Naturally, costume designer Patricia Norris chose to dress Rossellini in a low-cut, lacy LBD for the occasion when she seductively performs a rendition of the film’s titular song before a flustered Jeffrey.

Wearing a kitten as a hat, and a black evening gown cut to reveal the entirety of her legs and highlight the shelf of an ample bosom, Anita Ekberg is the ultimate on-screen siren in Federico Fellini’s La Dolce Vita, luring journalist Marcello Rubini to dance with her in Rome’s Trevi Fountain. The historic scene was shot during a cold winter in Italy, and actor Marcello Mastroianni was forced to wear a wetsuit under his clothing and ply himself with vodka to withstand the freezing temperatures. Ekberg, however, took the near-hypothermia in her stride. Fellini claimed that Cristóbal Balenciaga’s sack dress silhoutte inspired the film, which won the Academy Award for best costumes in 1962, but was also censored by the vatican for its depiction of promiscuity, casual sex and suicide.

Before Fifty Shades of Grey, there was 9½ Weeks. The 80s erotic drama stars Kim Basinger in the role of Elizabeth McGraw, a New York gallerist who enters into a volatile sexual relationship with Wall Street banker John Gray (played by a devastatingly attractive Mickey Rourke). John entices Elizabeth by showering her with gifts and attention, even taking her to pick out clothes at the Comme des Garçons store in Manhattan. The seduction process cumulates in several sex scenes involving food, water and a shadowy strip tease against a vertical blind. The dark mood of the film is mirrored in Elizabeth’s wardrobe, in which 1980s power-dressing meets with soft silhouettes in charcoal greys and biscuit beiges, set against a heavy dose of black. In the above scene, Basinger wears a batwing dress with stilettos, smoky eyes and 30 denier tights, as Rourke teases her with a riding crop.