Interviews | The Case for Sports Photography as Art

Cassius Clay from Who Shot Sports by Gail Buckland

Gail Buckland has written or been a collaborator on fourteen books of photographic history, including Fox Talbot and the Invention of Photography, The Magic Image (with Cecil Beaton), The American Century (by Harold Evans), and Who Shot Rock & Roll. She lives in Brooklyn and upstate New York. Her latest book is Who Shot Sports.

During the NBA Finals, a riveting photo of LeBron James popped up on social media that captures his greatness, worth way more than any sportswriter’s 1,000-word-ode to follow. There he is, bathed in light, levitating high above the rim, an almost spectral vision, ready to throw down on not just the Warriors, but on the outer limits of the sport itself. It’s a shot from Game Three, the first Cavaliers victory in the series, a lifetime before they would overcome a three-to-one deficit to the greatest regular season team in NBA history. In hindsight, it looks like the ascension of a basketball god. Had the Cavs lost, it would be a picture of an unfulfilled king, the most gifted player of the twenty-first-century crashing and burning yet again. 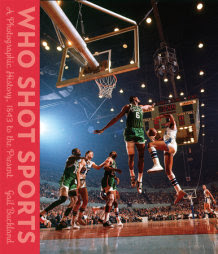