Greek Myths You Should Know to Understand Art History

6 Greek Myths You Should Know to Understand Art History 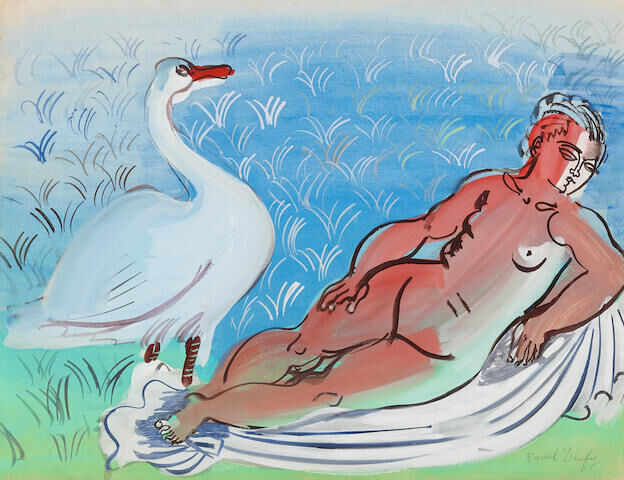 Raoul Dufy
Léda et le Cygne, 1926
BAILLY GALLERY
Greek myths have captivated the imaginations of artists since ancient sculptors created gods and goddesses out of marble. The trials of ancient Greek heroes and monsters have served as inspiration for
Renaissance
masters,
Surrealists
, and
conceptual
artists alike. Although no unified telling of Greek mythology exists, sources like Homer’s Iliad and Ovid’s Metamorphoses provide an alternate history of humanity, from the creation of the first woman to the downfall of Troy. Below, we detail six myths essential to understanding the Greek mythology that has been woven into art history.

Pandora, the first woman on Earth, was created in an act of vengeance. Zeus, the king of the sky and the gods, was angry with the Titan Prometheus for creating man in the image of the gods and providing them with fire that he stole from heaven. Zeus ordered the god Hephaestus to create Pandora to exact revenge on Prometheus. Pandora was placed into an idyllic version of Earth, and Zeus gave her a box that he told her never to open. Pandora couldn’t resist the temptation and opened the box, releasing a score of plagues into the world, like disease, old age, and death.
French painter
Odilon Redon
was fascinated by women from classical mythology, and he painted Pandora several times. In a painting from ca. 1914, Pandora appears nude and surrounded by scores of bright flowers, yet she is intently focused on the small box in her hands. Redon painted the work in the years leading up to World War I, potentially drawing a parallel between the horrors inflicted by the opening of her box and those of the war. Pandora’s influence reaches into contemporary art as well; Filipino artist
David Medalla
, for example, created Cosmic Pandora Micro-Box (2010) by collecting objects he found during a residency in Brazil, like socks, a bar of soap, and oyster shells. By linking ordinary objects and mythology, he questions how pedestrian items can be as impactful as the divine contents of Pandora’s box. 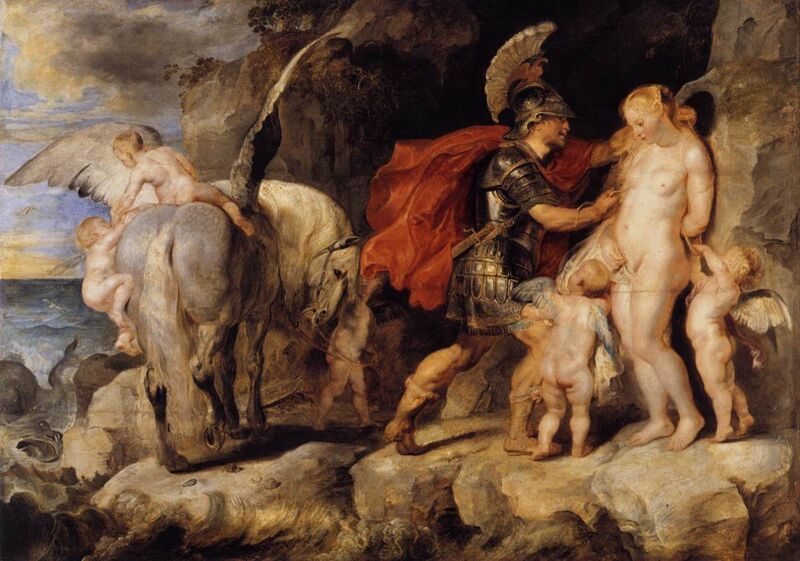 Perseus is one of the foremost heroes of Greek mythology, known primarily for slaying Medusa and Cetus, the sea monster that guarded the princess Andromeda. Queen Cassiopeia, who ruled a mythical version of Ethiopia with her husband, boasted that she and her daughter Andromeda were as beautiful as the Nereids, or sea nymphs. This remark offended Poseidon, god of the sea, and in an act of vengeance against Cassiopeia, he set Cetus loose on the kingdom. After consulting an oracle, Andromeda’s father King Cepheus tied her to a rock on the shore, sacrificing her to appease Poseidon. Perseus then slayed Cetus and made Andromeda his wife.
Perhaps the most famous depictions of this myth are by
Peter Paul Rubens
, who returned to the subject several times. In Perseus frees Andromeda (1620–1622), we see Perseus approaching a chained Andromeda, aided by several putti, or cherubs. The slain Cetus is visible in the lower left corner. Andromeda’s plight also inspired artists centuries later:
Frederic Leighton
depicted her twisted beneath Cetus as Perseus pierces him with an arrow; while David Gascoyne appropriated the tale in a surrealist take where Andromeda’s head is perched atop a tennis racket. 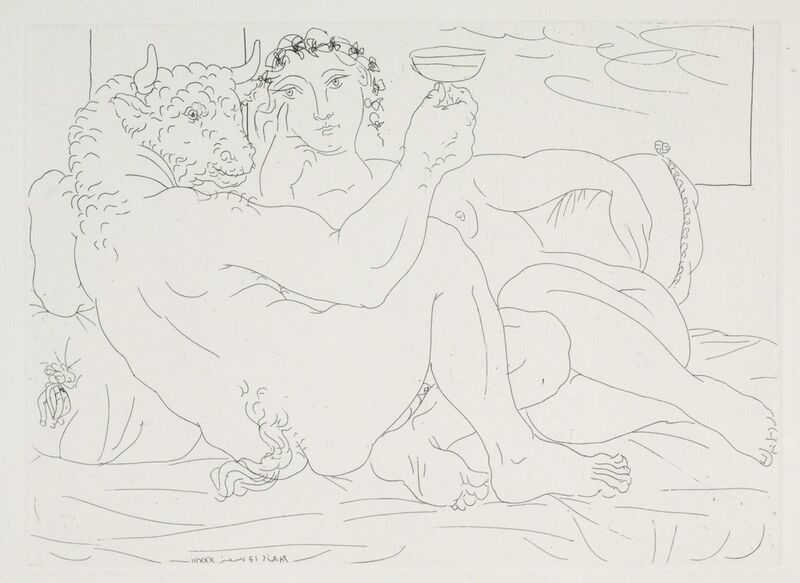 The Minotaur is a half-human, half-bull monster born to Queen Pasiphae of Crete. Daedalus, King Minos’s prized inventor, created a labyrinth to conceal the beast, which demanded a payment of seven young men and seven virgins (accounts vary on how frequent that payment was required, ranging from annually to every nine years). The Greek hero Theseus eventually slayed the Minotaur, but the mythical creature and its symbolism of forbidden desire, lust, and greed lives on.
Pablo Picasso
became particularly interested in the Minotaur during a period of personal turmoil—when his marriage to Olga Khokhlova was in trouble, and his mistress at the time, Marie-Thérèse Walter, was pregnant. However, his frequent depictions of the monster also coincided with rising political tensions in 1930s Europe. The artist connected the mythical creature with the bullfighting of his Spanish heritage, producing etchings like Minotaurmachy (1935), which depicts the Minotaur leaning toward a young girl holding a candle. The work served as source imagery for Guernica (1937), which also features a bull. Other artists embraced the Minotaur, too:
André Breton
and Pierre Mabille published a magazine entitled Minotaure in the 1930s, while
Jackson Pollock
immortalized the beast’s mother Pasiphaë in his 1943 work by the same name. In
Leonora Carrington
’s And Then We Saw the Daughter of the Minotaur! (1953), a robed bull figure sits at a table, surrounded by two children and a ghostly figure.
The Minotaur has also been used to more moralizing ends:
Symbolist
painter
George Frederic Watts
used the monster in an 1885 work in which the Minotaur gazes out at the sea, waiting for his annual feast to arrive. In his depiction of an expectant beast, Watts invokes male lust, born out of concerns over child prostitution in Britain. 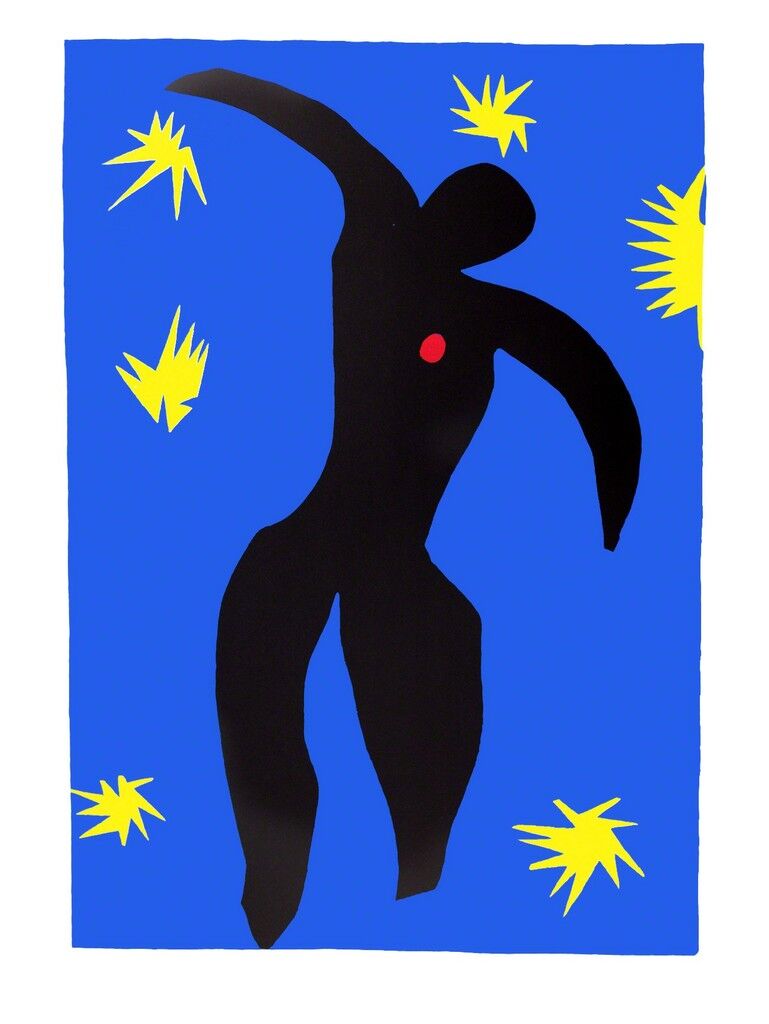 Aside from trapping the Minotaur in his labyrinth, Daedalus is also known for the tragic death of his son Icarus, who has inspired countless songs, poems, and artworks. To escape from Crete, Daedalus fashioned wings for himself and his son. Despite warnings from his father, Icarus flew too close to the sun and the wax holding his wings together melted, causing him to fall into the ocean and drown. The story is often told as a cautionary tale of the pitfalls of excessive pride and ambition.
The most famous depiction of Icarus by far is Landscape with the Fall of Icarus (ca. 1555), which depicts a falling Icarus masked within a larger scene of domestic life on the seaside. The viewer can only see Icarus’s flailing legs disappearing; he is entirely ignored by all the other depicted figures. The oil painting is attributed to
Pieter Bruegel the Elder,
though some experts doubt its authenticity due to eccentricities in the work itself and the lack of a precise date or provenance for the painting.
Henri Matisse
created a more lighthearted depiction of Icarus in his cut-out from the illustrated book Jazz (1947). There, Matisse embraced his new invention—paper cut-outs—and snipped away at sheets of red, black, yellow, and blue paper to create the image of a man dancing among the stars.

Leda and the Swan 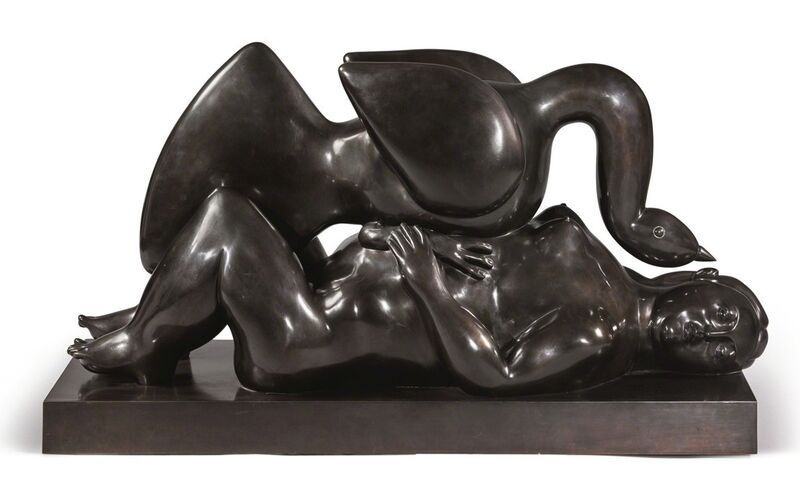 Leda and the Swan is perhaps one of the most perplexing tales in Greek mythology to the modern reader. It is also one of the most prominent myths that echoes across centuries of art history. In the myth, Zeus takes the form of a swan to rape Leda, the queen of Sparta, resulting in the birth of Helen. The story becomes even more distressing when considering that Helen ran off with, or was abducted by, the Trojan prince Paris, inciting the Trojan War.
The image of woman and bird, and the destruction it would bring, has captivated various artists over the years.
Leonardo da Vinci
painted two versions of Leda and the Swan, yet both have been lost. Other versions by Leonardo’s students survive, all depicting a demure, nude woman holding a swan; several preparatory sketches by the master himself still exist. Around 1880,
Paul Cézanne
created his own Leda and the Swan, depicting a blonde woman staring at a swan biting her hand, a look of ambivalence upon her face. French avant-garde artist
Marie Laurencin
shows a contemplative Leda dressed in pink, leaning over a black railing to pet the bird.
Cy Twombly
put his own Abstract Expressionist take on the tale, creating a maniacal mess of crayon, pencil, and paint, with some discernible elements, like hearts and a penis. 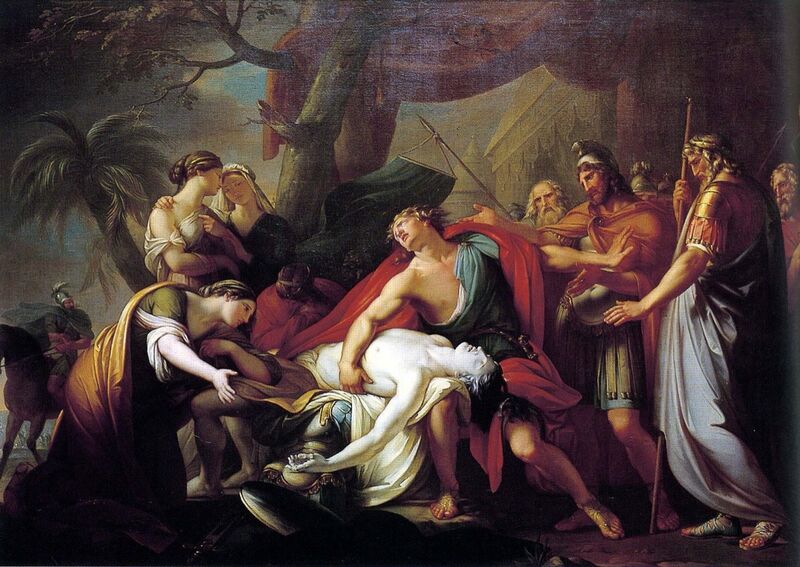 Achilles arose as a hero of the Trojan War, leading the Greeks through a 10-year siege of Troy. One of his most notable feats is killing Hector to avenge the death of his supposed lover Patroclus. Achilles eventually falls victim to a prophecy foretelling his death at Troy; in most versions of the story, the god Apollo guides the arrow of the Trojan prince Paris to Achilles’s heel, his only vulnerable spot. His story was central to Homer’s Iliad, and his feats of heroism, as well as his deeply human tragedy, have kept the story alive.
Barnett Newman
was particularly inspired by Greek mythology; he often used titles from the Bible or antiquity, and once wrote a letter to Clement Greenberg defending the Greek style and figure, writing, “It was the Greeks who invented the idea of beauty. Before their time a work of art was concerned with the problem of meaning and was a visible symbol of hieratic thought.” Newman’s admiration of Greek civilization is particularly evident in Achilles (1952), which depicts a red vertical stripe surrounded by brown. The red is most likely a reference to the armor Hephaestus created for Achilles to wear into battle. Twombly also created his own abstract version of the Greek tragedy in Fifty Days at Iliam: Shades of Achilles, Patroclus and Hector (1978).
A more traditional take on Achilles’s story exists in Achilles Lamenting the Death of Patroclus (1760–1763) by
Gavin Hamilton
; in the work, Achilles is draped over a ghostly white Patroclus, pushing away the other Greek soldiers.
Andrea Mary Marshall
’s 2015 Self Portrait as Achilles pictures a woman stepping into the shell of the Greek hero; she hunches away from the camera, showing the viewer bruises up and down her back. Her right hand claps an arrow aimed at her foot, alluding to the myth of the Achilles heel.

Christy Kuesel is an Editorial Intern at Artsy.

Why We Don’t See More Pregnant Women in Art History

Man Ray Made Iconic Surrealist Photographs—and so Much More

This Artwork Changed My Life: Pablo
Posted by Cabecilha at 7:38:00 PM