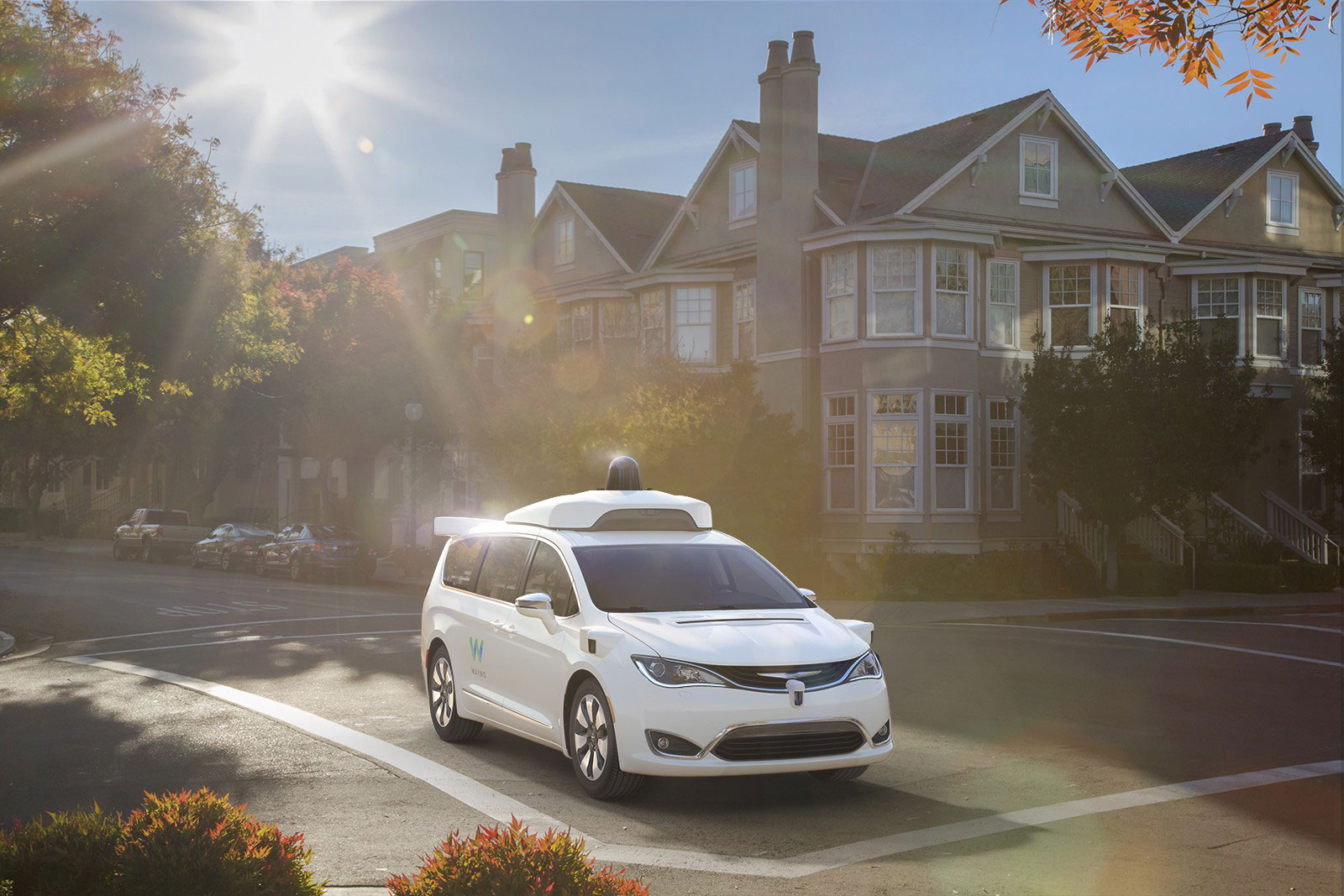 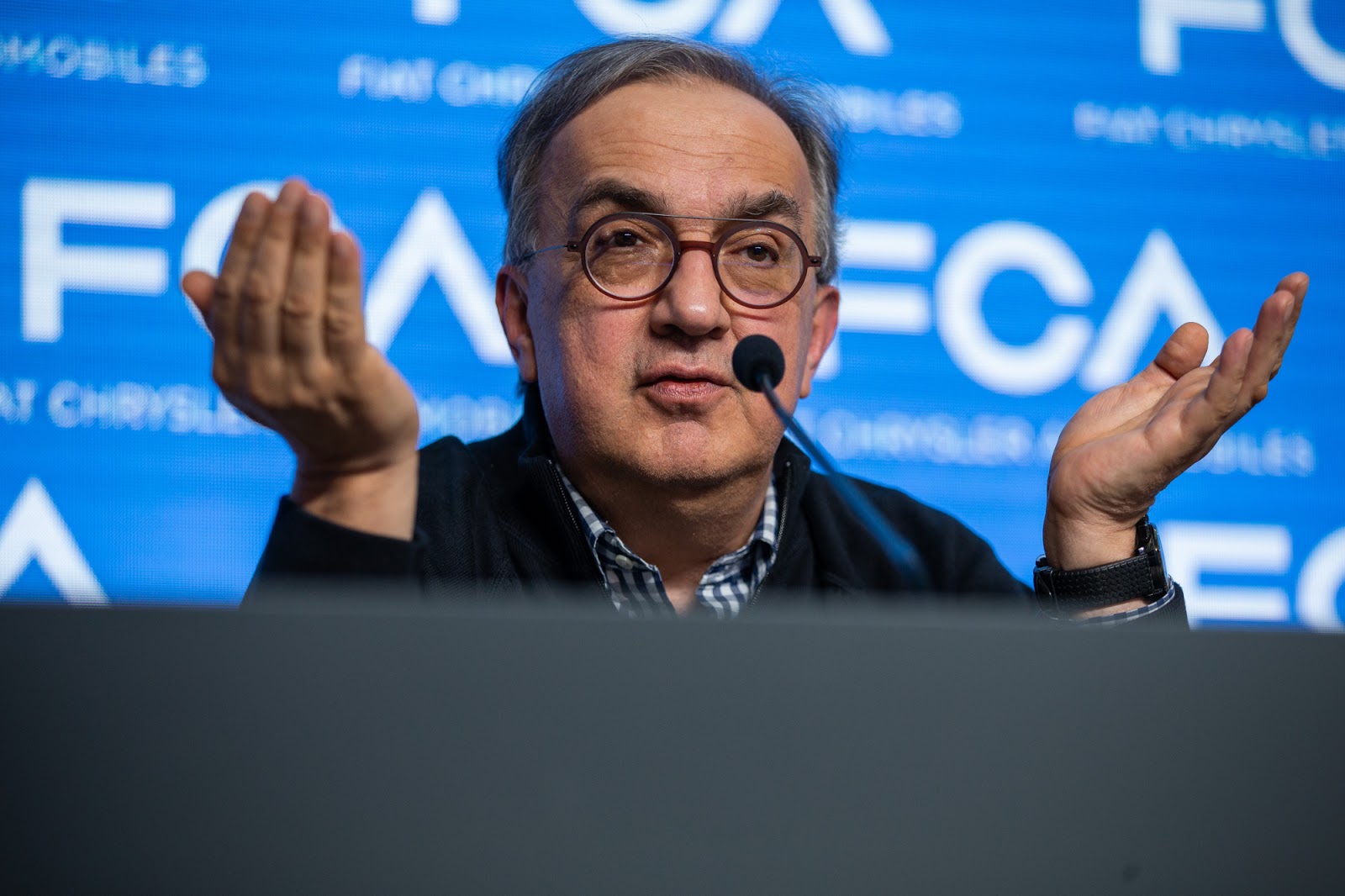 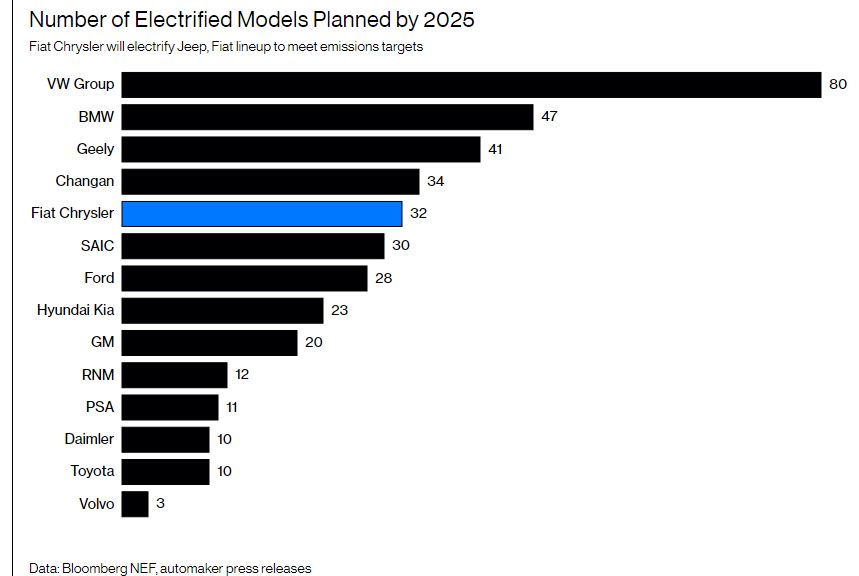 Fiat Chrysler’s Cheapskate Strategy for the Future of Driving

Email
When Waymo picks up its first paying customer in a driverless taxi later this year, the car doing the honors will be made by Fiat Chrysler Automobiles NV. Not the sensors and software—the futuristic technology that allows a robot to drive a minivan will be made by Waymo. The relatively boring minivan itself? That’s pretty much Fiat Chrysler’s only significant contribution to the race to develop autonomous vehicles.
It’s an ironic twist that Fiat Chrysler, the world’s seventh-largest automaker, with a reputation for being frugal with research budgets, will provide the cars for one of the pioneering driverless businesses. The company’s decision to forgo serious investment in self-driving technology has led some analysts to issue grim warnings for its future if ride-hailing ends up cannibalizing individual car ownership.

Bigger rivals such as Volkswagen AG and General Motors Co. grabbed headlines in the past year with multibillion-dollar plans to electrify their lineups and launch robotaxi fleets. Sergio Marchionne, the late chief executive officer of Fiat Chrysler, focused on financial targets instead. Under his 14-year leadership, the automaker starved some product lines to shrink debt while orchestrating spinoffs to boost the company’s value. Marchionne griped about how much money he lost on his company’s only battery-electric car, the Fiat 500e. Each purchase—and there weren’t many—set the bottom line back as much as $20,000.
But his penny-pinching, wait-and-see approach started looking better after he inked a deal to sell 62,000 Chrysler Pacifica hybrid minivans to Waymo, the self-driving unit of Google parent Alphabet Inc. and the front-runner in the self-driving car race. The partnership is a test case for whether teaming with a technology powerhouse proves to be a savvy long-term bet for automakers or a Faustian bargain with the agent of their demise.
“When you have constraints put on you, whether it’s financial or otherwise, you have to be a little more creative,” Sam Abuelsamid, an analyst with Navigant Research, said of Fiat Chrysler’s approach. “I don’t know that they necessarily planned it this way, but I think it could actually work out for them.”

The role of supplier to a bleeding-edge innovator has its perks. Fiat Chrysler is currently in talks with Waymo to license the software it would need to sell full self-driving cars to retail customers. Waymo CEO John Krafcik has said he envisions sharing profits from the robotaxi business with automaker partners in the future. “We’re not disrupting this industry—we are enabling this industry,” Krafcik told Bloomberg in an interview last month.
There are also partnerships with BMW AG and auto supplier Aptiv Plc to bring limited autonomous features, such as automated steering and lane changes, to Fiat Chrysler’s Jeep, Ram, Maserati and Alfa Romeo brands starting in 2019. In that way, without paying billions for research, Fiat Chrysler may end up with access to much of the same technology as big-spending leaders in the field.
One area where Marchionne did place some chips on the table was development of the Chrysler Pacifica, the only plug-in hybrid minivan in the U.S. market. That attracted interest from self-driving startups, since a spacious minivan with sliding doors is good for shuttling passengers and the battery in a hybrid helps power all the chips and sensors needed to feed the car’s robot brain. Voyage, an AV startup that’s running taxi pilots in retirement communities in California and Florida, switched form the hybrid Ford Fusion sedan to six plug-in hybrid Pacificas in January, according to co-founder Oliver Cameron.
The tens of thousands of minivans purchased by Waymo have another benefit for Fiat Chrysler. With a guaranteed buyer of its plug-in hybrid vehicle, the Italian-American carmaker will have a better shot at meeting fuel-economy standards in the U.S., which are determined by the average miles per gallon of the entire fleet of vehicles sold. It’s a small boost for an automaker that ranked dead last among 13 car companies for both fuel economy and carbon emissions in the Environmental Protection Agency’s evaluation of 2016 sales, the most recent complete data available.
While the Trump administration’s efforts to freeze emissions targets and strip California of its authority to adopt tougher standards may lower the bar in the U.S., Fiat Chrysler still has to grapple with tightening regulations in Europe and China. That’s why, after years of minimizing investments in electrification, the company in June said it will spend 9 billion euros ($10.3 billion) by 2022 to electrify its lineup and ditch diesel passenger cars.
While Marchionne busied himself with corporate spinoffs and turbocharging Jeep sales to help increase profits, he did leave a road map to face the music on electric vehicles. Fiat Chrysler’s new five-year strategic plan leans heavily on slipping hybrid engines into its top-selling Jeep and Ram brands, part of the effort to meet emissions standards. The automaker will also produce a fully electric lineup of its iconic Fiat 500 city cars for sale in Europe, four battery-electric and 10 plug-in hybrid Jeeps, and an electric performance car under its Maserati brand.

Plenty of industry observers praise Marchionne, who died on July 25 after a surgery, for not throwing billions at money-losing electric cars. Eric Noble, president of product development consulting firm the CarLab, said trying to sell a battery-electric vehicle in high volumes would have been “tantamount to white-collar crime” for the debt-laden company.
But the catch-up plan, now in the hands of Marchionne’s successor, Mike Manley, is not without risk. The downside to saving your pennies is that when you suddenly have to scramble to sell electric cars—as Fiat Chrysler will in Europe—you don’t have much brand awareness as an electric-car company. And if you stumble on production hiccups or can’t sell as many as you need to hit emissions targets, you’re in trouble.
Wall Street has flagged Fiat Chrysler as one of the automakers at risk of missing EU emissions targets in 2021, and it’ll be on the hook for as much as $1 billion in fines if it does, Barclays warned in a June note after the carmaker announced its electrification plans. Shares of Fiat Chrysler rose 1.2 percent to $16.51 at 10:25 a.m. in New York on Tuesday, paring their loss this year to 7.4 percent.

A dire outcome is unlikely because no automaker is going to risk an unforced error, and there are other variables besides propulsion to play with. Fiat Chrysler could use lighter-weight materials and make the cars more aerodynamic to reduce wind resistance, said George Galliers, who covers the company for Evercore ISI in London. Manley, a former car dealer who increased Jeep sales from about 300,000 in 2009 to almost 1.4 million last year, has a salesman’s sensibility that Galliers believes will come in handy when figuring out the right mix between hybrids and fully electric vehicles.
Those instincts seem to have failed Manley in China, however, where the company reported a 35 percent drop in Jeep sales from its mainland joint venture in the second quarter. He told investors on July 25 he needs to reposition the Jeep brand to better suit local tastes in the world’s largest car market by adding better fuel efficiency and self-driving features.
“The good news is I think we know what” the problems are in China, Manley told investors on his first earnings call as CEO. “We can certainly fix them.”

Back in January, Marchionne warned that established automakers have less than a decade to reinvent themselves for the self-driving era or risk having their cars become commoditized people-movers. It’s too early to tell whether becoming a vehicle supplier to Waymo and outsourcing the tech needed to keep the strongest brands competitive is a sound survival strategy. But it at least puts the company on firm financial footing as it tries to navigate the disruption.
“There’s going to be major losses and a major waste of cash,” Alexandre Marian, a director in the automotive practice at AlixPartners in San Francisco, said of the industry’s spending on autonomous and electric vehicles. “I would expect major turbulences ahead.”—With Tommaso Ebhardt and Tom Randall
(Corrects spelling of Waymo CEO’s name in sixth paragraph)
Posted by Cabecilha at 6:11:00 PM