Mar-a-Lago Has a Feisty New Neighbor 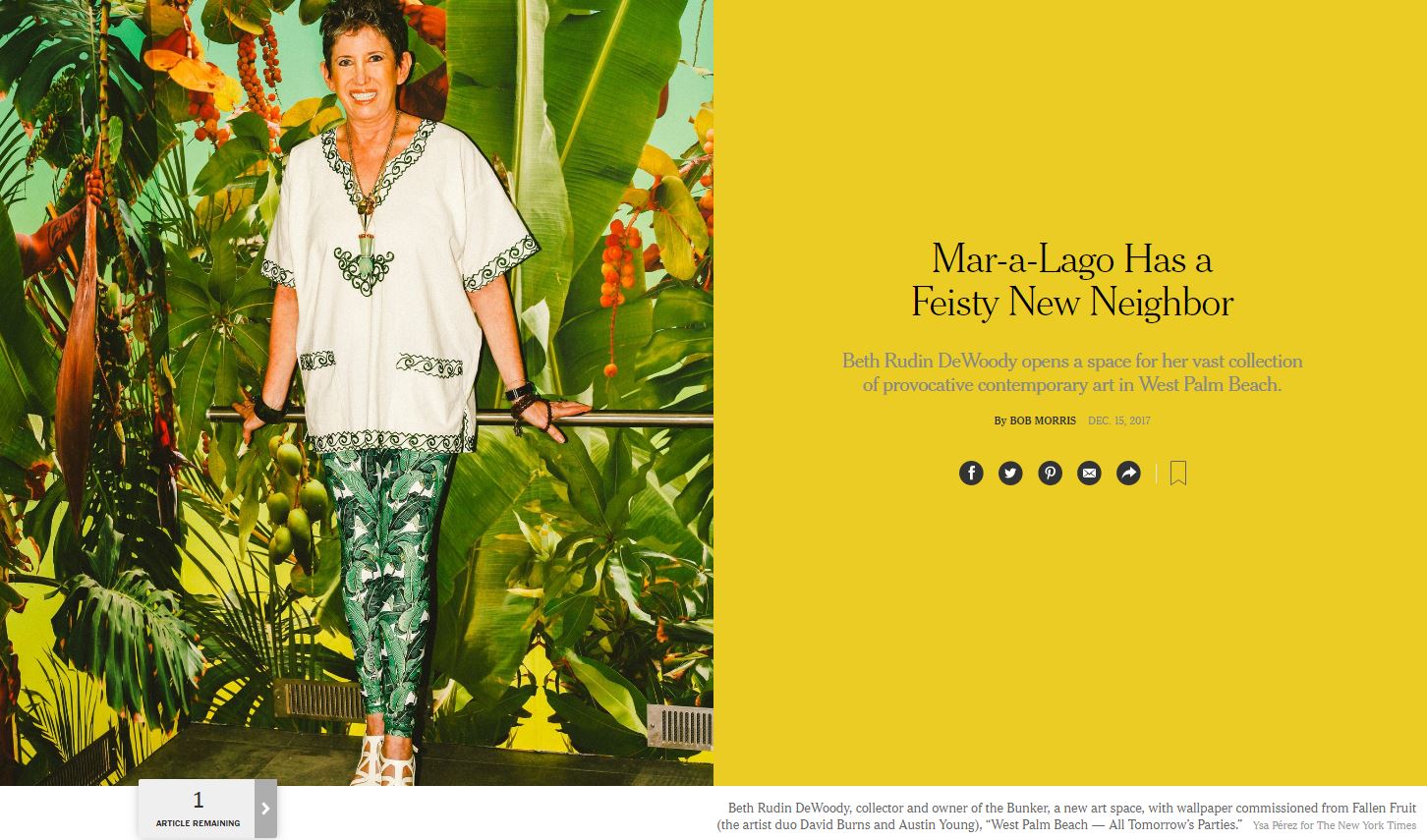 WEST PALM BEACH, FLA. — Beth Rudin DeWoody, the art world doyenne born into a New York real estate fortune, was walking through The BunkerArtspace, a renovated Art Deco building here that she recently opened as an exhibition space for her renowned and eccentric collection.
Although just two miles from Mar-a-Lago, the building is another world, and an indication that this serene, largely residential area is making a play for some of the art scene pizazz of Miami, just an hour or two drive south.
“This is the X-rated area,” Ms. DeWoody, a slim woman in her mid-60s, was saying downstairs in a corner gallery of the Bunker. Dressed in tropical fruit colors, and with her third husband, Firooz Zahedi, a photographer, and their small white poodle following, she passed a Paul McCarthy white silicone bust with a sex toy. A Nick Cave assemblage had one too.
There was a painting depicting a crucifixion by George Condo that might not be pleasing to some of her more conservative neighbors, and a deer’s head made of zippered black leather likely only to please a sadomasochist. Nearby a doll size sculpture by John Waters was having a play date with a Charles Manson doll.
Continue reading the main story
ADVERTISEMENT
Continue reading the main story
Ms. DeWoody, who is president of the Rudin Family Foundations and on the boards of the Whitney Museum of American Art and the Hammer Museum, owns more than 10,000 pieces of art, including a vast array of work that is lyrical, artisanal and playful. But she has a special fondness for the big button-pushers that other collectors of her caliber might be more inclined to eschew. “I think art should be provocative,” she said.
Continue reading the main story
The Bunker, which is open by appointment, is in a workaday area in West Palm Beach, across the Intracoastal Waterway from Palm Beach. Hers is not unlike the spaces of other collectors, including those of the Rubell family, Martin Margulies and Rosa and Carlos de la Cruz — all in Miami and now open with regular visiting hours. But the Miami area, with its mammoth fair, satellite fairs and myriad museums, including the newly reopened Bass Museum and the Institute of Contemporary Art is in a state of art overdrive.
Until now the Palm Beach metropolitan area — with only one art museum, the Norton, that sometimes shows contemporary work, — has been mostly considered a city for safe and sedate exhibitions. Collectors here, including Republicans like the commerce secretary, Wilbur Ross, tend to have more recognizably blue-chip art. Contemporary galleries stick to the familiar too — catering to customers who have art advisers and decorating needs for winter homes.
Continue reading the main story

Along with Ms. De Woody, a few provocateurs are shaking things up. Sarah Gavlak has a contemporary gallery that doesn’t shy away from selling sexually explicit and politically confrontational art on Worth Avenue, home to luxury stores and dealers offering soothing work by recognizable artists. (A recent front-page article in The Palm Beach Daily News about Ms. Gavlak’s organization of the city’s first “art weekend” ran next to one about a local descendant of Pocahontas who is a Mar-a-Lago club member.)
Yvonne Force Villareal, who helped found the Art Production Fund, a nonprofit that helps support risk-taking art around the world, was recently here to collaborate on a video and sound installation inside an abandoned West Palm Beach Macy’s.
“There are good people around,” said Andrew Hall, the financial trader, who along with 600 invited guests attended a lavish opening night party for the Bunker on Dec. 2. Mr. Hall has a Palm Beach home with his wife, Christine, and oversees exhibition spaces showing his own vast collection in Vermont, Germany and at Mass MoCA. “Seeing a space like this open up right now is kind of reassuring,” he added.
Nearby, Ms. DeWoody breezed through a room with early works by Edward Hopper, Man Ray, Jim Dine, William Wegman and Jean-Michel Basquiat. She stopped and smiled at a lurid ceramic sculpture, a miniature with a cartoon quality called “The Mad Doctor’s Operation” by Clayton Bailey and Peter Saul from the 1970s Bay Area Funk movement.
Continue reading the main story
“I’m just a hopeless and perpetual collector and I know I’ve overdone it,” she said, “but it’s just very hard for me to say no.”
This is what has made Ms. DeWoody, who grew up in Manhattan and takes her name from her first husband, James DeWoody, an artist (her two adult children are from that marriage), a fairy godmother to many young artists, waving around her checkbook like a magic wand.
“She’s the consummate art shopper and gets in on artists early,” said Angela Westwater, the gallerist who sold Ms. DeWoody early work by Tom Sachs.
Often she makes introductions to help promote a young artist’s career.
Years ago, when Ms. DeWoody, who resides between New York, Los Angeles and West Palm Beach, visited the small Harlem studio of Kehinde Wiley, he was struggling. The $5,000 she spent on one of his portraits, he later told her, was more important than bigger sums that followed because it helped him survive. Now he is an art world superstar and has been selected to paint the official portrait of former President Barack Obama for the Smithsonian’s National Portrait Gallery.
Continue reading the main story
“I don’t think of buying art as investing,” Ms. DeWoody said. “But at times it works out that way.”
In every corner of the packed 20,000-square-foot space guests were taking in a collection of about 300 works that had been humorously curated into rooms by Phillip Estlund, Laura Dvorkin and Maynard Monrow. Each had a theme, including early and atypical work, art about art, food, ecology and the color silver.
“It’s all very Beth,” said Melissa Soros, an arts patron.
The occasion seemed to provide a balm to residents of a city of royal palms and a reminder to step away from the drama of politics to let art uplift and amuse. Drag performers handed out “Fallen Fruit” cocktails. Anne Pasternak, the director of the Brooklyn Museum was there, as was the artist Mike Starn, her husband. So was Harry Benson, the celebrity photographer. The list included all political stripes and affiliations from the art world and beyond. Well, almost. Ivanka Trump, a contemporary collector, was not invited.
Late in the evening Adam Weinberg, the affable Whitney director, hustled along with Ms. DeWoody. “Her collection is more intuitive and associative than linear,” he said. “And it’s all about opening up, not shutting down.” Ms. DeWoody showed him one work after another, from an early Cindy Sherman collage to a drinking fountain by Ti-Rock Moore emitting brown water with a sign that said “colored” above it, recalling the days of segregation. She had something to say about each artist, as if they were family.
“Come,” Ms. DeWoody said as she nudged Mr. Weinberg along. “I have to show you something else.”
Correction: December 16, 2017
An earlier version of a picture caption with this article misstated the given name of an artist. He is Alec Egan, not Alex.
Continue reading the main story
Posted by Cabecilha at 1:29:00 PM