Edition: UK
Advertisement
This summer BBC Four asserted itself as television’s ultimate polymath by adding sport to its repertoire of coverage. Like an unassuming scholarly uncle who momentarily puts down his book and his pipe to humiliate everyone at table-tennis or badminton on a family summer holiday, so BBC Four showed it could partake in less cerebral matters.
Now summer’s over and BBC Four has once again donned its cardigan and its glasses to educate us about grand and meaningful things like it’s always done. Well, not quite. It’s ‘Conceptual Art Week’ on the channel, and while the first programme of the series, ‘Who’s Afraid of Conceptual Art?’, is certainly engrossing and well-made, it does just serve to highlight that conceptual art is at best ludicrous and at worst (sometimes very literally), utter crap.
The show is presented by the affable art historian Dr James Fox, a self-confessed conceptual art sceptic, and he spends the hour doing his best trying to convince himself, and us, that there’s something more profound about ready-made, installation and performance ‘art’ than mere pretension. As you’d expect he starts with the father of conceptual art, Marcel Duchamp, who in 1917 took the piss out of the traditionalist art establishment by presenting a urinal in an exhibition of international art. Now I’m not sure I’d go as far as calling Duchamp’s Fountain a work of art, but there’s no denying its iconoclastic brilliance and its power as a statement against artistic elitism. It made a mockery of artistic institutions whilst rather more positively suggesting that anything in everyday life contained the potential to become art when re-contextualised by an intellectually engaged and creative mind. Things would never be the same again, Fox tell us. But the problem with all the conceptual art that came after is precisely the fact that everything appears to be the same as what Duchamp did.
- ADVERTISEMENT - 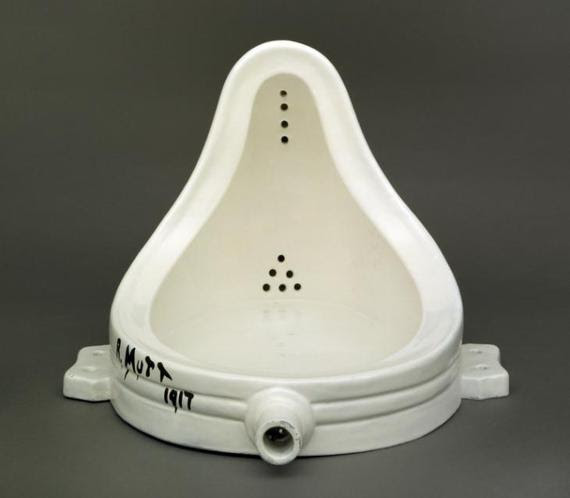 Fountain 1917, Replica 1964 © Succession Marcel Duchamp/ADAGP, Paris and DACS, London 2016
Take the next ‘artist’ Fox discusses for example, the Italian Piero Manzoni, who filled tins with his own sh*t and sold them for thousands. It’s crude and reduces the haughty topic of art to scatology. But is it shocking? Does it make a bold statement and cause us to rethink the nature of art and artist? No, not really. It’s just a derivative of what Duchamp achieved some half a century earlier, right down to synthesis of art and waste. But if there’s an element of puerile humour to take from Manzoni’s work, some of the other pieces Fox explores have no redeeming qualities whatsoever.
Turner prize winner Martin Creed talks to Fox about his series of scrunched up paper balls, mumbling various clichés about how art is about appreciating the simple things in life, and who is to say what’s good or bad art. Fox nods politely and moves on looking thoroughly unimpressed. It’s a shame that he doesn’t push Creed further or, better yet, just lob the paper ball into the nearest recycling bin. So long as he can’t articulate why his work should be deemed art and he an artist, Creed’s crumpled pieces of paper aren’t even bad art. They’re rubbish.
Later Fox meets street artist Robert Montgomery who places his poems on billboards and various other public space. One such piece features a line about sunsets which Montgomery earnestly explains means that he sees himself as an artist of the ilk of Turner. But he’s not just a Romantic. No, what supposedly makes him unique is that he believes that “idea of art is to be engaged with the culture and politics of the time”. Right. So like every artist then.
Conceptual artists spout such hackneyed banalities because at the core of their work there is a dearth of originality. Montgomery’s use of billboards to supposedly fuse art with consumerism is just a dilution of Pop Art which emerged in the 1950s with Richard Hamilton’s Just What Is It That Makes Homes Today So Different, So Appealing?. The use of words in lieu of images in another piece Fox mentions, Michael Craig-Martin’s An Oak Tree (it’s actually a glass of water called an oak tree), as well as Montgomery’s own, brings nothing new to the semantic games played by Rene Magritte and the Surrealists in the 1920s.
Duchamp, the Dadaists, Magritte, Hamilton, Warhol etc. might not be everyone’s traditional idea of skilled artists, but at least they were original and had a clear philosophy or manifesto which ensured that their work had a broader, lasting significance. The conceptual artists that Fox meets here and that are exhibited and exalted all over the world just seem to be rather arbitrarily picking their ideologies and copying what has come before.
Fox finishes the programme by demonstrating his open-mindedness and conceding that conceptual art can indeed be considered to be ‘real’ art. But I remain unconvinced. It’s impossible to give a definition of what art truly is, but one thing it categorically cannot be, is dull. Duchamp subverted convention, tore apart traditions and made art profane, but it gave his successors little else to do. No piece of conceptual art will ever be quite as scandalous, outlandish and inspired as that urinal. In a post-Duchamp world where anything goes, sh*tting in a box, scrunching up some paper, crawling on glass, or putting a shark in some jelly all seems a bit pointless and boring. If you want to create an artwork that’s really shocking today, pick up a paintbrush.