Most Small Businesses Are Barely Saving Any Money

America Is Not the Greatest Country on Earth. It’s No. 28

The Professor Who Was Right About Index Funds All Along 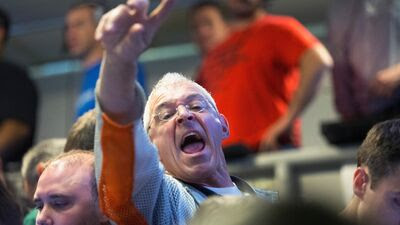 Fink: Markets to Fall 15% Without Fiscal Action
Share on FacebookShare on Twitter
Share on LinkedInShare on RedditShare on Google+E-mail
As Federal Reserve officials gather to issue their monthly assessment of the world's largest economy, a new study lays bare the extent to which many small firms are pressed for cash.
"Most small businesses are operating on very small margins," Diana Farrell, CEO of the JPMorgan Chase Institute, an in-house think tank that uses data from the bank to analyze the economy. "The small business sector is less full of future Googles and Ubers and tons and tons of very small operators living month to month," she said in a phone interview.

Start your day with what’s moving markets.
Get our markets daily newsletter.
The companies in question may be small, but they represent an outsized share of the U.S. economy. According to the Small Business and Entrepreneurship Council, they account for roughly 50 percent of gross domestic product and more than 50 percent of new job creation — a metric that's closely watched by the Fed in determining whether the economy can withstand a constriction in financing conditions. Yet even though they're contributing a great deal to the economy there remains ignorance about their financial health, Farrell added. On average, the companies surveyed have just 27 days worth of cash reserves — or money to cover expenses if inflows suddenly stopped — according to the JPMorgan study, which analyzed 470 million transactions by 570,000 small business last year. Restaurants typically hold the smallest cash buffers, with just 16 days of reserves, while the real-estate sector boasts the biggest, at 47 days.
Small businesses attempting to expand (or just keep their head above water) may find it difficult to build up reserves, with daily income outpacing expenditure by just $7, according to JPMorgan's study.
The findings come as small-business optimism appears to be stagnating in the U.S., with the National Federation of Independent Business's (NFIB) Small Business Optimism Index dropping 0.2 percentage points to 94.4 in August. That's running below its 42-year average of 98.

"Political uncertainty two months ahead of the presidential election could be distorting small business sentiment," Carl Riccadonna, Bloomberg Intelligence Chief Economist, wrote in a report earlier this month. "A sharp drop in the economic outlook and hiring plans weighed on overall business optimism, pushing the headline NFIB Small Business Optimism Index lower in August."
Some 39 percent of small business owners cited the political climate as a reason not to expand — an all-time high, according to the NFIB. Uncertainty over government policy, as well as the wider economy, also hit record highs last month. Still, the JPMorgan Institute's Farrell suggests small businesses should focus the things they have control over rather than taxes or regulatory changes, for instance.
"What most small businesses should be thinking about is having a clear sense of what their liquidity picture is," she said. "This is an immediate thing that would impact a large swath of small businesses that they themselves can act on."

Before it's here, it's on the Bloomberg Terminal. LEARN MORE
by Taboola
Sponsored Links
From The Web
Posted by Cabecilha at 5:56:00 PM