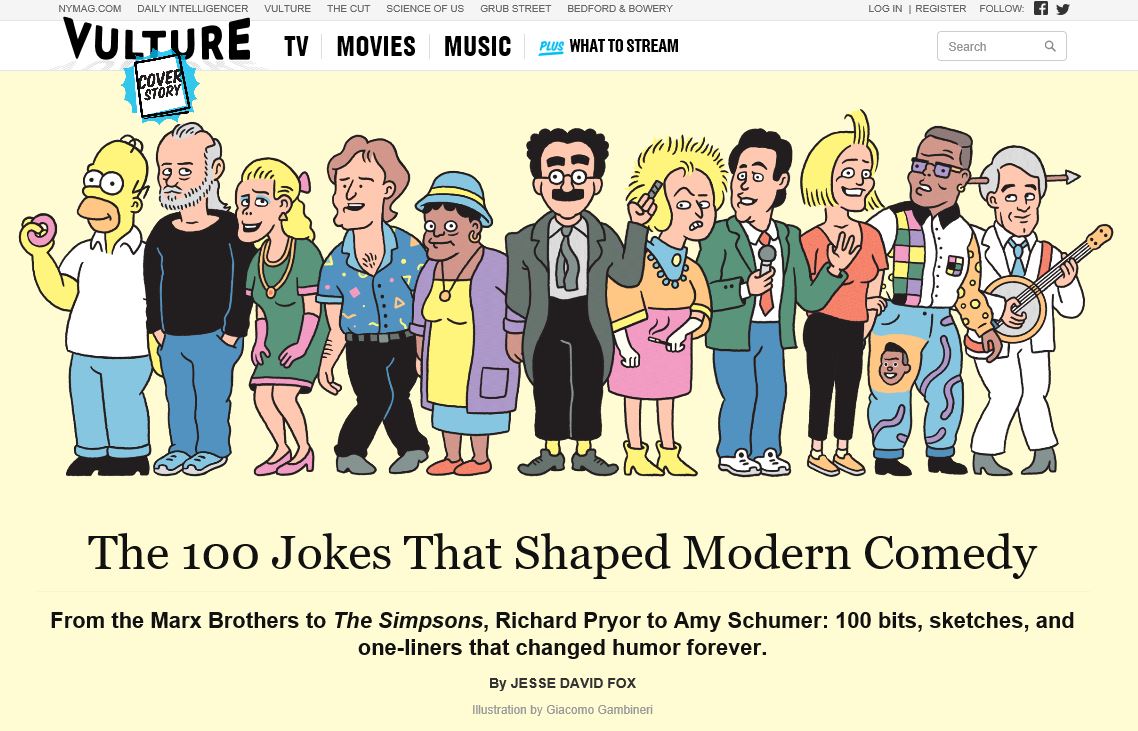 1931 Bacon, Beans, and LimousinesWill Rogers “Well, because ’32 is an election year, see, and the Republicans always see that everything looks good on election year, see? They give us three good years and one bad one — no, three bad ones and one good one.”
When Jon Stewart was hosting The Daily Show, there were many times when you could feel Stewart was truly bothered by the social injustice or the bonehead media figure he was talking about, and even though Stewart was speaking from the heart, he could still make you laugh. That was what Will Rogers pioneered in the 1930s. With a down-home, backwoods charm, Rogers became a national figure by discussing the government and his humorous, logical approach to what was wrong with it. In the midst of the Great Depression, Hoover introduced a plan designed to encourage local groups to help with unemployment, and he asked Rogers to appear on the radio to help promote this plan. What he got were these jokes. Every generation needs a Colbert to present the truth in an entertaining way, and Will Rogers was one of the first we had.
1932 Laurel and Hardy vs. a PianoLaurel and Hardy, Hal Roach, James Parrott, H. M. Walker, The Music Box Ollie: That’s the house up there. Right on top of the stoop.Laurel and Hardy are hired to deliver a piano to a house in Los Angeles, and discover on their arrival that the door is at the top of a very steep, very narrow flight of steps. That’s it. The bare-bones premise allows it to become a pure physical-comedy experiment: How many possible variations can they ring on “Piano goes partway up; piano goes back down”? It’s like a Bach fugue, with a theme and variations and then variations on the variations, although Bach’s keyboard ended up in better shape than this battered instrument does.

1933 We’re Going to WarThe Marx Brothers, Leo McCarey, Duck Soup “They got guns /
We got guns /
All God’s chillun got guns” There are a lot of different ways to express how you’re feeling about the state of the world. The Marx Brothers used insanity. In Duck Soup, Groucho is appointed the leader of the small country of Freedonia, but when the neighboring country of Sylvania attempts to annex it, Freedonia goes to war. The final ten minutes of the movie begin with the song “The Country’s Going to War,” in which the people of Freedonia excitedly sing about the coming conflict, but it slowly devolves into a minstrel show in which the brothers sing “All God’s Chillun Got Guns.” The final battle is a rapid-fire attack of jokes, similar to the Tommy gun Groucho uses to accidentally shoot his own soldiers. This section of Duck Soup appears briefly in Woody Allen’s Hannah and Her Sisters, when Allen’s character, in the midst of an existential crisis, has an epiphany that, rather than trying to understand everything about life, we should just enjoy it. The Marx Brothers may not have been able to do anything about the coming war, but they certainly gave us something to laugh about.
‘When I’m Good I’m Very Good … But When I’m Bad, I’m Better’Mae West, I'm No AngelIt’s almost a crime to pick just one of Mae West’s brilliant, bawdy quips, but it's hard to say there’s a joke that more perfectly sums up West’s pithy, punchy power quite so well. A playwright who was once arrested for her risqué material, West wrote her best lines herself, including this one, from her hit film I’m No Angel, which provoked such shock and outrage with audiences that it helped contribute to the institution of the restrictive Hays Code in Hollywood. Before that, she was an early subject of FCC censorship. She was also an early advocate of LGBT rights and sexual freedom, and in the 1930s she reportedly bought the upscale apartment building she was living in to force it to desegregate. At once a renegade, a box-office sensation, and an unlikely sex symbol, she reshaped the very rules of comedy. When she was good she was very good, but when she was bad, she was an absolute badass.

1934 Lessons in HitchhikingClaudette Colbert, Clark Gable, Frank Capra, Robert Riskin, It Happened One Night Ellie: I’ll stop a car and I won’t use my thumb.
Peter: What are you going to do?
Ellie: A system all my own …One of the earliest examples of the Depression-era screwball comedy, Frank Capra’s charming road-trip film created an enduring template for escapist romantic fictions featuring temperamentally mismatched leads, with a touch of slapstick humor and motormouthed banter worth reciting. Gable’s cocky newspaperman Peter Warne finds a story and a love interest in Colbert’s Ellie Andrews, a headstrong heiress on the run from the iron fist of her rich father. The film’s signature bit is a visual gag in which Peter teaches Ellie how to hitchhike; after a half-dozen cars zoom by in rapid succession, Ellie steps up, hikes up her skirt to reveal a little leg, and the next driver immediately skids to a halt. The tactic betters Ellie’s chauvinistic counterpart, and firms up the ideal of the sassy, brassy woman whose sex appeal is a tool subservient to the machinations of her clever mind. In the context of this modern Taming of the Shrew, the smart, sexy sensibility of this bit influenced a host of other lightly bawdy screwballs, and has been handed down to argumentative would-be paramours, from Moonlighting’s David and Maddie to Archer and Lana from Archer.

1936 The FeudFred Allen, Jack Benny Allen: A certain alleged violinist should hold his head in shame.This was the joke, which Fred Allen quipped in response to a child violinist who performed on his show, that was the start of the legendary “feud” between Allen and Jack Benny. Creating a fake rivalry to get attention was nothing new when the wry, clever Allen started taking shots at his longtime friend Benny on the air, but their commitment to the gag was. The two volleyed insults back-and-forth on their shows and made occasional appearances on each other’s programs, they ran a “Why I Can’t Stand Jack Benny” contest, and a three-round boxing match between Allen and Benny was advertised (though it would never come to fruition). The pair kept the sideshow going for a decade. This blurring of the line between what is reality and what is comedy would happen again and again thereafter, with great moments such as Andy Kaufman’s foray into wrestling, various comedians’ presidential runs, and, to some extent, the comedy of Sacha Baron Cohen. Allen never made the leap to television, which, sadly, leaves him in the shadows of that era’s comedic greats, but when it came to smart comedy that rewarded the audience for paying attention, nobody did it better than Fred Allen.

c. 1937 ‘Take My Wife … Please.’Henny YoungmanIt’s hard to say with authority exactly who invented the one-liner, but Borscht Belt comedian Henny Youngman (the man Walter Winchell called “the King of the One-Liners”) is arguably responsible for the most famous one ever. Just like how Groucho's moustache, eyebrows, nose, and glasses became synonymous with “comedian,” “Take my wife … please” is the Platonic ideal of a joke. The format is one that is still mimicked to this day: using a familiar phrase to draw people in, then taking a sharp left turn. And though the joke is seen as shticky and hacky at this point, structurally it is deceptively elegant, as the setup is hiding inside what seems like a transition. Despite writing tens, if not hundreds of thousands, of jokes in his life, legend has it that Youngman’s most famous one was the result of an accident. When he first started working on the The Kate Smith Show, Youngman's beloved wife, Sadie, brought a bunch of her friends backstage with her. Annoyed, Youngman brought his wife to the stagehand and said, “Take my wife, please.” The rest is history.

1938 Who’s on FirstAbbott & Costello Abbott: Who is on first. Costello: I’m asking you who’s on first.Abbott: That’s the man’s name.Costello: That’s who’s name?Abbott: Yes. No single sketch has imprinted itself on the American psyche in the last century more acutely than “Who’s on First.” This impeccably structured scene of baseball monikers and prickly pronouns was both the germ of Abbott and Costello’s incredible career and its crown jewel. The sketch itself endures for a number of reasons: Its simple premise delivering myriad laugh lines, the clear schlemiel-schlimazel dynamic between performers, the room it provides for embellishment, and the rat-a-tat delivery make it feel like a ramshackle Ford Model T gathering speed as it barrels toward the edge of a cliff. As the calm and collected Abbott painstakingly explains his baseball team’s lineup — “Who’s on first, What’s on second, I-Don’t-Know’s on third” — Costello tumbles headlong into a misunderstanding made funnier by his infuriated and impotent yaps. Loving tributes to Abbott and Costello’s rhythms and antagonistic banter can be found in countless buddy movies, as well as current projects by fans such as Quentin Tarantino and Jerry Seinfeld. The sketch’s history also tells us something about the American relationship with ownership of comedic material; while the act was drawn from similar vaudeville acts of the day, Abbott and Costello copyrighted “Who’s on First” in 1944.