Art News in the Postprint Era


The Hustle of Publishing Art News in the Postprint Era

Phong Bui, an artist and curator and a founder of the art newspaper The Brooklyn Rail, makes an unlikely media executive. 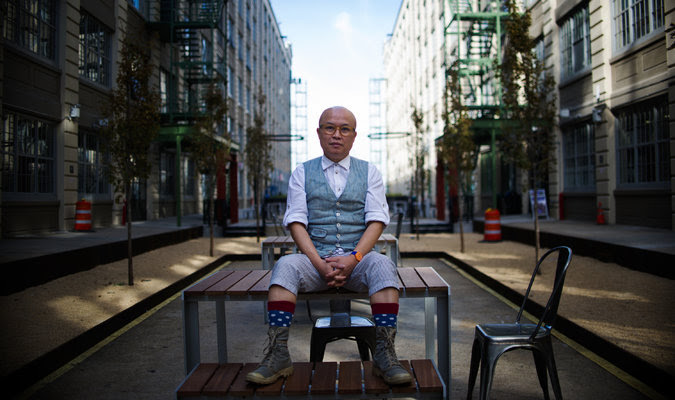 Phong Bui, publisher of The Brooklyn Rail, in Brooklyn on Thursday. Credit Hilary Swift for The New York Times

One wall of his studio at the paper’s headquarters in a former warehouse in Sunset Park is taken up with dozens of delicate pencil portraits. (He aims to exhibit them when he gets to more than 500.) Another displays what he calls meditations — pictures he creates by drawing a single line, meditatively, in a swirl. In conversations peppered with aphorisms and anecdotes, he comes across as a philosophical guru more than a publisher.
“The challenge has been how to make The Rail into a work of art,” he said, describing the paper, which he helped found in his apartment 15 years ago this month, and its frequent events as a kind of social sculpture made of human activity and connections.
It is not a goal often heard in the boardrooms of publishing companies. But The Rail, which reaches about 20,000 readers a month in print and an additional 200,000 online, is among a group of niche publications that have found ways to defy a media industry increasingly preoccupied with greater scale. For these publications, serving small, often highbrow readerships, it is not possible to follow the prevailing model — gathering audiences of millions, or tens of millions, to be sold for pennies to advertisers or converted to subscribers.
Instead, money for The Rail’s three full-time staff members and other costs is patched together, often from one month to the next, out of donations from the public and members of its board, along with a limited quantity of advertising, fund-raising drives, grants and occasional art auctions. The next auction will be in association with the Pace Gallery in January.
Other publications have similarly raised money from their most dedicated communities. At the end of last month, the London literary magazine The White Review reached a goal to raise more than $25,000 on the crowdfunding site Kickstarter. To those who pledged money, it offered incentives like a walk around London with the novelist Will Self and a limited print by the artist Rachel Whiteread. Guernica magazine raised more than $22,000, also last month, and Bomb magazine and McSweeney’s, among others, have succeeded in similar endeavors. The Rail offers those who donate $1,000 on its website dinner with its editors and contributors. Those who give $2,500 also receive one of Mr. Bui’s meditation works.
“I think it allows for this space where this cultural dialogue can happen unfettered by a drive for profit,” said Sara Christoph, The Rail’s managing director. “We can publish younger writers and older writers. We can cover controversial things.”
“For many years, I was complaining that there was this huge absence of a sense of community of artists, an intellectual discourse, a kind of Bohemia like there used to be in New York City,” said the artist Shirin Neshat, a supporter of The Rail. Mr. Bui, she said, has struggled against the odds to provide that community and connect artists who “don’t see each other anymore except at openings.”

Mr. Bui, who arrived in the United States from Vietnam in 1980, conceived of The Rail in 1998 as a kind of handout pamphlet, because he was tired of having endless debates with friends and other artists in Brooklyn bars.
“I was reminded of this Vietnamese proverb: When you argue with an intelligent person, you can’t win. When you argue with a stupid person, you can’t stop,” he said. “I thought, as long as we can kind of get together and transform that energy, it can be something good.”
Two years later, he sold a painting for $2,000 and borrowed an additional $500 from a friend, and the paper began printing more formally. It has a policy, Mr. Bui said, of allowing its editors and writers freedom.
“We respect individual voices,” Mr. Bui said. “We only edit grammar and occasionally fact-check, not the words. With every single piece, you can kind of figure out what age this person is.”
Each issue includes fiction — including translated works from around the world — and features reviews, conversations with artists that may run for pages and essays with titles like “The Overproduction of Intelligence: The Reshaping of Social Classes in the United States.” It now has two affiliate publications: The Third Rail, in Minneapolis, and The Miami Rail.
Mr. Bui lost 25 years’ worth of his own work, and a substantial portion of The Rail’s archives, when his studio flooded during Hurricane Sandy. His response was to help curate a sprawling 2013 show called “Come Together: Surviving Sandy,” centered on artists who had work lost or damaged in the storm. At many moments, the art critic Roberta Smith wrote in a review for The New York Times, “this egalitarian show makes palpable the greatness of New York’s real art world.”
His ambition now, he said, is to make sure The Rail is no longer existing month to month but can plan for the future. One of his favorite stories is about the painter Willem de Kooning.
“He was so poor that he could not afford to have people to model for him,” Mr. Bui said. “He would wander the streets of the Bowery, the fashion district. One day he found a mannequin, and he was so excited. He took it home, put his coat on it and set it up to paint. But then he started crying out of self-pity.”
Poverty, Mr. Bui said, can be profoundly important for creative endeavors. But only to a point.