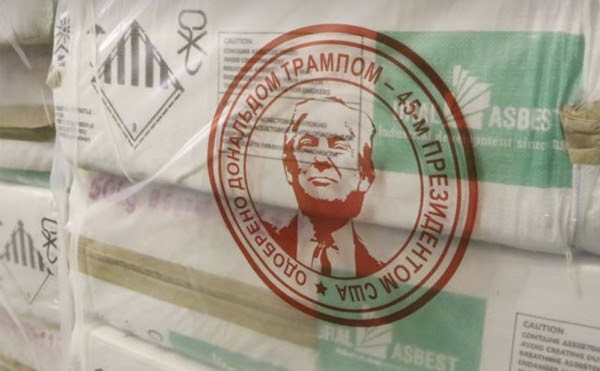 As US Rules for Asbestos Are Sidestepped, a Russian Manufacturer Emblazons Trump’s Face on Their Shipments

There were at least two things Americans should have banned outright in the 1970s when they had the chance: asbestos and Donald Trump.

Americans have known about the health risks of asbestos since at least the 1970s when most other countries around the world banned the insulation material because of its highly carcinogenic properties. With an ever-loving fondness for free enterprise, the United States decided only to regulate the asthma-inducing contaminate in the 1970s through regulations created by Occupational Safety and Health Administration (OSHA) and the US Environmental Protection Agency (EPA). And although it was one of the first materials regulated under the Clean Air Act of 1973, President Donald Trump’s administration recently released new guidelines allowing the EPA to sidestep red tape and put asbestos back into the manufacturing process for some building materials.
Russia is one of the few European countries still producing the dangerous substance in mass quantities. Recently, images surfaced on the asbestos exporter Uralasbest’s Facebook profile showing the company’s pallets stamped with a seal featuring Trump’s face that reads, “Approved by Donald Trump the 45th President of the United States.”
It’s almost hard to believe this happened, but the fact-checking site Snopes claims Uralesbest’s latest publicity ploy is real. And honestly, the company’s faux official endorsement isn’t far off from the president’s previous comments about asbestos. In his 1997 book, The Art of the Comeback, Trump wrote that asbestos is “100 percent safe, once applied,” despite overwhelming evidence to the contrary. In the book, he continued:

I believe that the movement against asbestos was led by the mob, because it was often mob-related companies that would do the asbestos removal. Great pressure was put on politicians, and as usual, the politicians relented.

On multiple occasions, the president has also blamed the collapse of the Twin Towers on the absence of asbestos. Speaking to Congress in 2005, Trump said, “A lot of people say that if the World Trade Center had asbestos is wouldn’t have burned down, it’s wouldn’t have melted … A lot of people in my industry think asbestos is the greatest fireproofing material ever made.”
Actually, the original World Trade Center did contain some asbestos. Construction on the towers occurred in the 1960s and 1970s when the building industry was first learning about the dangerous qualities of asbestos. Believing a government ban on the material was imminent, planners decided to stop using asbestos on insulation after completing the 40th floor. After 9/11, there were multiple reports and worries that the asbestos pulverized into the air surrounding Ground Zero could have led to serious health complications for survivors and first responders.
Direct or indirect exposure to the carcinogen can cause lung cancer and mesothelioma, and it has been found to kill 40,000 Americans annually. The World Health Organization wrote that “all types of asbestos cause lung cancer, mesothelioma, cancer of the larynx and ovary, and asbestosis.”
Posted by Cabecilha at 12:23:00 PM